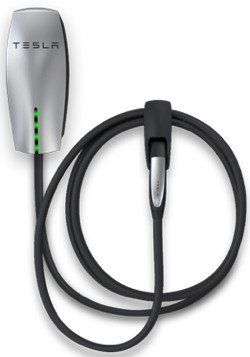 Tesla's big wall charger adapter replacement program is about to get a lot bigger. For one thing, the replacement has become an official recall. Secondly, the number of affected adapters is higher than expected: 29,222 units.

The National Highway Traffic Safety Administration officially announced the recall today. Tesla says that the problem lies in "certain NEMA 14-50 (240 volt) Universal Mobile Connector (UMC) adapters" and that the problem is that the adapter, cord, or wall outlet can overheat during charging. This possibility came to light in a garage fire in California in November and has resulted in some melted adapters since then.

As we know, step one in solving this problem was an over-the-air software update (version 5.8.4 or later) that would shut off charging if things got too hot in November. Then, late last week, Tesla CEO Elon Musk said his company would send out the replacement wall adapters that has thermal fuses built in. We wondered at the time if this would lead to an official recall, since the charging unit is not, technically, part of the car. It has, even though at the Detroit Auto Show today, Tesla representatives testily said that the even if NHTSA calls it a recall, Tesla just calls it modern technology (Update: and now Elon Musk is chiming in on Twitter). You can read the entire recall notice below and find more details in in the letters between Tesla and NHTSA in this gallery. Tesla says just 2.7 percent of its UMC adapters had been returned because they were defective.


The word "recall" needs to be recalled.

Tesla has had recalls before, bringing the Roadster in for auxiliary cable issues and the first for the Model S because of seat latch problems. This new recall doesn't mean that Tesla has sold 29,000 Model S EVs – people could have purchased one for home and work, or not bought one at all – but it does imply that the number of Model S units sold is inching close to the 30,000 milestone. We should know more when the company releases Q4 2013 information next month.
Show full PR text
Report Receipt Date: JAN 13, 2014

All Products Associated with this Recall

An overheated adapter, cord, or wall receptacle, increases the risk of burn injury and/or fire.

Tesla will notify owners and provide an "over-the-air" software update. Some owners have already received this update. This update allows the Model S on board charging system to detect any unexpected fluctuations in the input power or higher resistance connections to the vehicle. If detected, the onboard charging system will automatically reduce the charging current by 25%. Tesla owners can verify that they have received the updated software (version 5.8.4 or later) by viewing the vehicle's center information screen. Additionally, Tesla will mail owners a replacement NEMA 14-50 adapter that is equipped with an internal thermal fuse. The manufacturer has not yet provided a notification schedule. Owners may contact Tesla Service Center at 1-877-79-TESLA (1-877-798-3752).