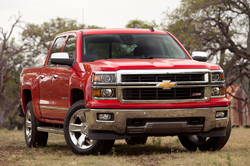 As is tradition, the first press day of the 2014 Detroit Auto Show has been kicked off with the announcement of the 2014 North American Car and Truck/Utility of the Year winners. And for the new year, top honors go to go the Chevrolet Corvette Stingray and Silverado – a sweep for the Bowtie brand.

In earning its Car of the Year award, the Corvette beat the slick new Cadillac CTS and lovely new Mazda3 compact – both great cars, for sure. But considering just how many awards the new Corvette has won since its debut earlier this year, we aren't exactly shocked that the NACTOY jury found it fitting of this prestigious award.

Competition was also stiff on the Truck/Utility side, where the Chevy Silverado bested the new Jeep Cherokee and Acura MDX.

Congratulations to both of the winners, as well as the finalists. We'll have more information regarding the 2014 North American Car and Truck/Utility of the year later, including voting breakdown.

UPDATE: The 49-member jury's point totals have been revealed, and the Corvette Stingray nabbed 211 points, the Mazda3 logged 185 and the Cadillac CTS trailed with 94. For the Truck/Utility award, the Silverado netted 219 points, the Jeep Cherokee finished second with 174 and the Acura MDX garnered 97. For more, check out the additional information available below.


The Chevrolet Corvette Stingray and Silverado were named the 2014 North American Car and Truck of the Year Monday morning at a news conference at the North American International Auto Show.

The winners were chosen by a jury of 49 automotive journalists from the United States and Canada.

The awards – now in their 21st year - are unique in the United States because instead of being given by a single media outlet they are awarded by a group of automotive journalists from the United States and Canada who represent magazines, television, radio, newspapers and web sites.

The awards are designed to recognize the most outstanding new vehicles of the year. These vehicles are benchmarks in their segments based on factors including innovation, comfort, design, safety, handling, driver satisfaction and value for the dollar.

It was the sixth car win for General Motors. The Corvette also won in 1998.

The jurors gave the Silverado 219 points; the Jeep Cherokee 174 and the Acura MDX 97.

It was the fourth truck win for General Motors. The Silverado also won in 2007.

To be eligible a vehicle must be all new or substantially changed. The jurors considered dozens of new vehicles before sending their ballots to Michelle Collins, a partner at Deloitte & Touche early in December.

On December 10th the three car and truck finalists were announced. But only Ms. Collins knew the winners until she handed over envelopes today to Tony Swan, a freelance journalist and member of the organizing committee, who made the announcements.

The votes each juror will be posted by January 20th on the awards web site, www.northamericancaroftheyear.org

The awards were inspired by the "Car of the Year" in Europe.

They are administered by an organizing committee and are funded with dues paid by the jurors. There are no paid positions. Automakers do not pay to have their vehicles considered or to mention the awards in ads.

The "2013 North American Car of the Year" was the Cadillac ATS.