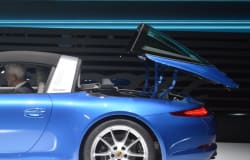 Back in 1965, Porsche invented the 911 Targa as a matter necessity. Believing that a finicky National Highway Traffic Safety Administration was prepared to outlaw convertibles, the innovative automaker created the half-open car as a way to keep wind rushing through owners' hair. Though far removed from those formative days, it seems as though the 2015 Porsche 911 Targa has come to the Detroit Auto Show with a new-school version of some old-school tech.

While the last Targa featured a trick sliding glass roof at the touch of the button, the new car dramatically swallows a traditional-looking panel via an exceptionally complex-looking mechanical operation. The net result is "the same fun factor and freedom" that can be had with a complete convertible, though with slightly more open-driving protection while underway.

And, as is the case with all of the current 911 range, getting underway can be done with reasonable rapidity. The entry-level Targa 4 rocks a 350-horsepower, 3.4-liter flat-six engine just behind the rear axle, making that car good for 175 miles per hour at the top end (with the seven-speed manual, 174 mph with PDK) and a 0-to-60 sprint of 4.6 seconds. The Targa 4S, meanwhile, offers 400 horsepower from 3.8-liters of boxer six, runs to 60 in 4.2 seconds and hits a top "track speed" of 183 mph.

As you can make out from those "4" monikers after the Targa sobriquet, every version of the car will come complete with all-wheel drive. Porsche was pushing the Targa as the best 911 option for all climates, so the inclusion of all-wheel drive makes an element of sense. It also, no doubt, adds to the bottom line of the car – the Targa 4 starts at $101,600 and the Targa 4S asks $116,200 (add $995 worth of destination fees to both those numbers). Expect the car to make it into dealers in the summer of this year.
Show full PR text
The 2014 Porsche 911 Targa

The world premiere of a modern classic

Atlanta. At the North American International Auto Show (NAIAS) in Detroit, Porsche is introducing two new models to the 911 range: the 911 Targa 4 and 911 Targa 4S. These models are the first to combine the classic Targa concept with cutting edge, innovative roof technology. Just like the legendary original 911 Targa of 1965, the new models feature the distinctive Targa roof bar, a movable front roof section, and a wraparound rear window. But unlike the classic 911 Targa, the roof segment can be opened and closed at the push of a button. The fully automatic roof system stows the Targa top behind the rear seats.

Both 911 Targa models exclusively come in AWD version, featuring the wider rear track and body, and the same Porsche Traction Management (PTM), found in all 911 all-wheel-drive models. It is an active all-wheel-drive system that helps to ensure the optimal distribution of drive power for optimum traction in most road scenarios, whether on long straights, through tight corners, or on surfaces with different friction coefficients. The combination of the wide body, the Targa bar, and the wraparound rear window results in an extremely sporty and low-slung profile.

Porsche Cars North America, Inc. (PCNA), based in Atlanta, Ga. is the exclusive U.S. importer of Porsche sports cars, including the Macan and Cayenne SUVs and the Panamera sports sedan. Established in 1984, it is a wholly-owned subsidiary of Porsche AG, which is headquartered in Stuttgart, Germany, and employs approximately 220 people who provide parts, service, marketing and training for 189 dealers. They, in turn, work to provide Porsche customers with a best-in-class experience that is in keeping with the brand's 63-year history and leadership in the advancement of vehicle performance, safety and efficiency.

At the core of this success is Porsche's proud racing heritage that boasts some 30,000 motorsport wins to date.