Never mind the naysayers; Lincoln is worth saving

In the case of Henry Leland, naming his new car brand after the first President he cast a vote for in 1864 seemed a jolly good idea, on paper.

You should always be careful about the name you choose to give your new baby. The power of association can work in many ways, not always positive.

In the case of Henry Leland, naming his new car brand after the first president he cast a vote for in 1864 seemed a jolly good idea, on paper. His pride and patriotic fervor easily overlooked the fact that the namesake was assassinated and for sure, poor Henry couldn't have known that the second most infamous presidential assassination in US history was to take place some 70 years later in one of his offspring's back seats. Both of those world events sent shockwaves through a nation, and could easily have created a crisis of confidence from which many other countries could not have recovered. The nation did recover and grow stronger, but the Lincoln Motor Company sadly has not enjoyed the same resilience.

From a peak in the '80s, sales of Ford's luxury division have been in decline. Even last year, when all its major competitors ( Mercedes-Benz, BMW, Audi and Cadillac) posted healthy gains, Lincoln suffered another year-over-year loss. The drop in demand came despite several new model introductions and intense marketing support. So how can a storied car marque, which given its nomenclature should be the very embodiment of integrity, strength and achievement, regain its position as the luxury car brand in the US?

Geoff Day has been called the "Pied Piper" of the auto industry, leading auto journalists on wild rides around the globe in his position as former director of communications for Mercedes-Benz USA. Before that, he worked at DaimlerChrysler UK on its PR efforts, and rubbed elbows with the Queen of England in his role at the Buckingham Palace Press Office. His phone is filled with the numbers of the great, the good and the bad. His head is filled with dirty little secrets hiding in many corners of the auto industry.


Lincoln take note: Everybody thought Cadillac was on its last legs a few years ago and it's now America's fastest-growing luxury car company. The same people who predicted Caddy's imminent demise are now calling for the killing of Lincoln, but I think that's Mr. Magoo vision. A distinct product line up, a cohesive marketing story, confidence in its own voice and a strong, vocal commitment from the Blue Oval boys and girls could return Lincoln to leadership. 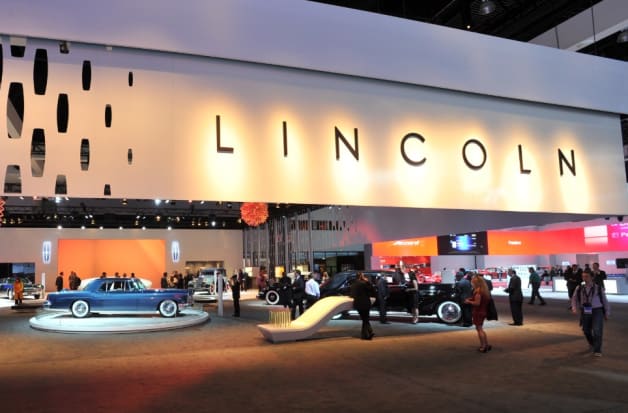 As a founding father of the US auto industry, the Lincoln Motor Company needs to remember what made it great, take those things and put a fresh modern twist on it.

I was very impressed at the 2012 LA Auto Show when Lincoln's stand was a wonderful homage to the brand's rich and celebrity-endorsed history, including Elizabeth Taylor's Continental Mark 2 with a custom interior to match her eyes. Dirty little secret No. 1: one day I hope to own a Mark 2 and make an entrance in a driveway much like Uncle Willie did in High Society. Now that's what I call glamour. But where is that appeal today?

Similar style, luxury and effortless performance were on display at Los Angeles across some 60 years of Lincoln automobiles – the trouble was though, that rich lineage hit a wall around the mid '60s and that is where the display drew a line under its history. They also hurriedly pushed these beauties off the stand after the press had seen them and replaced them with Monroney-clad new cars for the public days.

Removing the vintage cars was a mistake. Why would you sell your best story to an audience already well read on the subject and not show much-needed potential customers the DNA of your current offerings? One of the qualities of luxury is authenticity; I would suggest that is done more by an association to your past achievements than your current lease price.


One of the qualities of luxury is authenticity; I would suggest that is done more by an association to your past achievements than your current lease price.

Ralph Lauren once said to me that when a company's most desired product is one they built 40 years ago then that company is in trouble. Trust me, he knows a thing or two about using the glories of yesteryear to turn a tidy profit today. As the old saying goes, those who do not learn from history are condemned to repeat it.

Lincoln seems to have forgotten the lessons of its early years, when Edsel Ford acquired the company and set its sights on grace, elegance and speed. From that distinct brand philosophy was born the magnificent K series, the sexy Zephyr Coupe sedan and the glorious four-door Continental convertible. Sadly though, it seems today Lincoln is repeating the history of the '80s, little more than badge-engineered versions of the main Ford stable.

Whilst I understand the economics of the car business – it is first and foremost a business, after all – if you have aspirations to own a luxury brand, you better make sure you know what luxury means. Luxury lives in the allure of the form, not the rationale of function. It is tempting for sure to raid the extensive Ford part bins for the latest tech whiz bang, but luxury buyers take cutting edge innovation for granted. It's the price of entry into this segment. What Lincoln needs to do is wrap its technical ability up in a seductive design and a brand statement that says, "I made a cool and intelligent choice in buying this car." A luxury brand captivates by its promise, not its price.


Lincoln should be the American Audi. It has a longer and richer history and a recognition level that makes it a household name.

Some of Lincoln's past associations may have been inglorious, but to be fair, many more spoke to decades of leadership and proud confidence. When the Lincoln Mark 2 was introduced, it cost more than a very royal Rolls-Royce, it looked sexier than a svelte Italian job and was as well built as a German butcher's son. Given all the resources at Dearborn's disposal it doesn't seem a quantum leap to go back to those associations and own its future. Ford engineers are amongst the best in the world and Jim Farley is a highly acclaimed and likeable marketer; the bench strength is most certainly there. As a founding father of the US auto industry, the Lincoln Motor Company needs to remember what made it great, take those things and put a fresh, modern twist on it. Audi wasn't always the cool brand it is today. Only a few decades ago it was the poor, unloved cousin of the Germany car industry. Lincoln should be the American Audi. It has a longer and richer history, and a recognition level that makes it a household name.

By the time Lincoln celebrates its centenary year in 2017, there is no reason why it should not have as many again bright years ahead of it. But it needs the current talented team to breathe confidence and aspiration into the brand. Reaching the ripe old age of 100 is a cause for celebration, but only if they have in place a full car line of models people "ooh" and "aaah" over, teens want to own one day and enthusiasts believe are just as worthy of the badge today as the collectables of yesterday.

In other words, as Abraham Lincoln, the man whose name was taken to form this car company, said,"In the end its not the years in your life that count, it's the life in your years." If the brand accepts that philosophy I am confident the baby will continue to develop as a healthy growing boy.