The Best, Or At Least Not The Worst, Or Nothing View All Specs
The great all-arounder. A concept as familiar to sports fans as it is dear to gearheads, the expression sums up a person or thing that excels by way of diffuse – rather than concentrated – excellence. This is an especially formidable concept in the picky midsize sedan segment of the luxury car world, we'd argue, where brand loyalty and the force of history often power purchases as much as a car's feature set. Do nothing wrong and win, assuming your brand is strong and your model's reputation sterling.

In the case of the Mercedes-Benz E-Class, both brand and model are held in high regard, of course. What's more, the current iteration of the car, substantially revised for 2014, is very much in the competitive mix with other luxury sedans in most categories, without really being the best at any one thing.

The question is, does that make it the best choice in its segment overall?

We grabbed the keys to a well-optioned E350 4Matic sedan in an attempt to answer just that. Though rear-wheel drive is standard for the E-Class; diesel- and V8-power available; and coupe, convertible and wagon bodystyles are on the offer sheet, the V6-propelled, all-wheel-drive sedan seems to be a bread-and-butter choice for executive shoppers here in the northern part of the country. And, of course, BMW, Lexus, Audi, Cadillac and all the other contestants make sedans with similar drivelines, power and price tags.

A downward-sloping, curvaceous nose has replaced the more square-jawed look of its predecessor.

It's easy to pick out the visual updates that Mercedes has wrought for its E-Class in 2014. That's especially true from the front, where a downward-sloping, curvaceous nose has replaced the more square-jawed look of its predecessor.

You, dear reader, have gotten the full styling scoop on this car from the sharp eyes and flowing pens of both Chris Paukert and Matt Davis; suffice it to say that both reviewers wrote glowingly about the E-Class' exterior redux. Allow your current writer to step out of the first-person plural for long enough to say that I find the new car, not ugly, but uglier than it was before the extensive refresh. That delicate nose looks considerably more effete than I like on my sizable German sedans, creating a similar effect as seeing a huge man with a tiny head. It's worth noting that the car you see in our gallery wears the no-cost-optional Sport Styling package and its two-bar grille, which is ever so slightly more attractive than the three-bar chrome grille to my eyes. You'll vote on the styling yourself, we've no doubt, in both our comments section and with your hard-earned dollars.

And, even those who prefer the new looks over those of the outgoing car aren't likely to feel so strongly about them that they take the car off their consideration lists. There's too much good in the machine for that to happen. 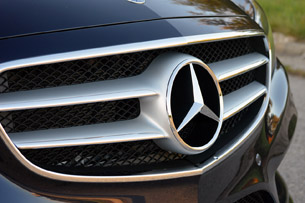 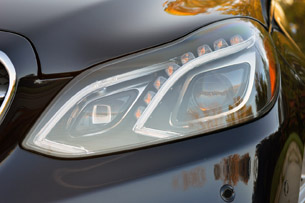 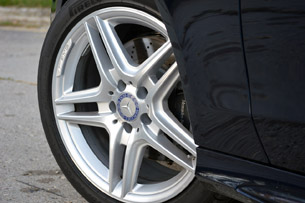 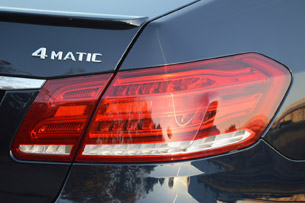 The Mercedes is extremely competitive in terms of fuel economy ratings.

A lot of what we love can be found under the hood of the E350, wherein a creamily tuned 3.5-liter V6 engine makes its happy home. Rated at 302 horsepower and 273 pound-feet of torque, the powerplant has held steady in output versus the car it replaces, and its specs put it in the middle of this tightly grouped pack of premium sedans. Forced-induction, 3.0-liter six-cylinder options from Audi and BMW offer considerably more torque (325 and 300 lb-ft, respectively), while Cadillac makes a goodly 318 hp from the slightly larger 3.6-liter V6 in its brand-new CTS.

Still, we feel just great behind the wheel of the E350 under most circumstances. The V6 might not make the bulk of its power until its tachometer needle is leaning to the right (max horsepower comes on at 6,500 rpm, and max torque between 3,500 and 5,250), but its satisfying, linear delivery, and the lovely exhaust note that emanates from the tailpipes, almost makes up for the lack of low-down grunt.

What's more, despite the E350's V6 being connected to an automatic transmission with 'only' seven speeds – the BMW 535i and Audi A6 offer eight, while the Cadillac CTS AWD and Lexus GS 350 make do with six – the Mercedes is extremely competitive in terms of fuel economy ratings. The E350 4Matic matches the more powerful BMW 535i xDrive with 20 miles per gallon in the city and 29 on the highway. (Of course, this is 2014 – these days every competitor offers a 2.0T, diesel or hybrid option if fuel economy is at the top of your shopping list.) 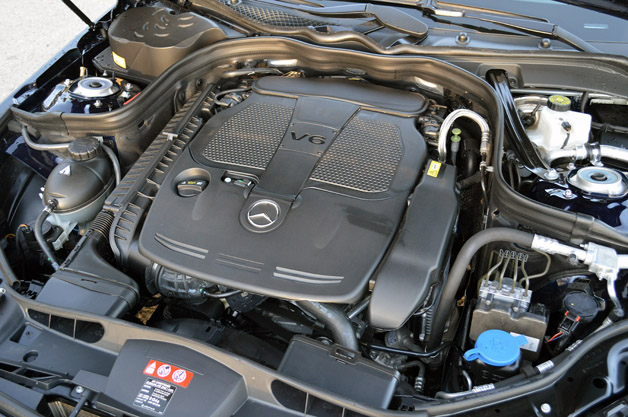 The steering experience is better than we remember from non-AMG Mercedes products.

Dynamically, we note that the seven-speed auto is incredibly smooth in operation, with neither the Mercedes' stop/start function nor the 4Matic system impacting the fluid manner in which power is delivered to the pavement.

We didn't have much in the way of inclement weather with which to test the robustness of the fourth-generation 4Matic all-wheel-drive setup, but we can say that it's completely unobtrusive on dry pavement under nearly all circumstances. 4Matic only adds about 150 pounds versus the rear-drive E-Class, and initial acceleration is unimpacted from a practical point of view (Mercedes drops its official 0-60 mph time by 0.1 seconds for the AWD car). Even with a standard front/rear torque split of 45/55, the overwhelming impression from behind the wheel is that you're in a rear-drive sedan – at least on clear roads. If we lived in a snow-free sector of the US, we might consider saving the $2,500 it costs to add the 4Matic package to the bottom line, but for everywhere else, it seems an almost painless addition.

Without a back-to-back driving comparison, it's hard to say where the E-Class nets out against its competition in terms of ride and handling. From what we've reported to date, it seems very likely that the new CTS might be the star of the lux-midsizers in terms of athleticism. We can say that the E350 feels pretty darn unflappable under normal conditions, however, with truly excellent ride quality over the busted Michigan highway system and slightly sporting inclinations on windier, twistier fare. The steering experience is better than we remember from non-AMG Mercedes products, too, with a nice, heavy weight when rowing from side to side, and overall control is bolstered with actual information from the front wheels.

We were less impressed with the design and finish of the E's interior.

The confines of the E-Class cabin are also remarkably quiet at speed. Unless we dug into the throttle deeply enough to elicit some bark from the tailpipe, the car proved pretty sanguine in all conditions – another place where the E is, if not at the very top of the class, at least among the leaders.

Sadly, we were less impressed with the design and finish of the E's interior – especially its suite of infotainment technology – than we were with the hushed, calm ride. Mercedes' software and interface has simplicity going for it, and the central COMAND control knob feels good and solid in hand. However, the processing guts of the system feel well behind the pacesetters of the segment, with laggy responses to inputs more or less found system-wide.

Despite disappointing infotainment electronics, the Mercedes' interior wins a lot of points for its resplendent front seats, which proved to be soft, easily adjustable and remarkably comfortable on hours-long drives. We also quite enjoyed the listening experience of the Harman/Kardon sound system (part of the $3,870 Premium 1 Package), which was doubtlessly impacted by the quiet cabin making for an excellent soundstage. The forward-view of the cabin is still dominated by a large amount of somber black plastic, however, and we're not crazy about the fingerprint-heavy sections of gloss black, nor the smallish navigation screen considering this car's starting price of over 50 grand. Again, no one predisposed to buying a new (or another) E-Class will sit down in the driver's seat and demand their money back, but comparison shoppers will likely find more of a wow factor in competitors' cars. 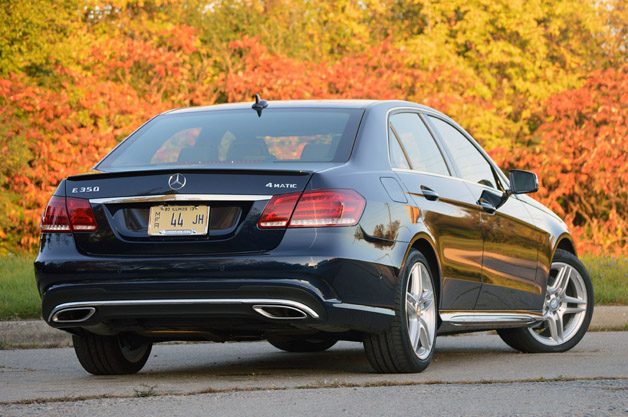 Of course, it might take slightly less to wow you into a new E350 4Matic these days, as Mercedes has – shock, wonder – priced the thing to be massively competitive within the segment. The E350 4Matic starts at $54,400 before you tally destination fees or any options. Audi, Cadillac and BMW all charge more for the all-wheel-drive versions of their sedans with comparable powertrains; Audi is closest with a roughly $1,500 gap, and BMW the farthest away with a $3,000 premium to start. The Lexus GS 350 AWD, another heavy hitter here, is by far the most affordable, starting at $49,950.

A trip through the world of online configurators shows that Lexus remains the price leader, though it's not inexpensive to get fully loaded versions of any of these vehicles, as evidenced by the $66,270 as-tested price you see for our E350. Oh, and don't forget that price doesn't include the $1,620 you'd have to spend to get actual leather seats instead of the M-Tex-clad chairs (honestly, the synthetic stuff is so convincing we're not sure we would bother). Any vehicle mentioned above can hit the $60k mark in its sleep.

So we come back to what you value, how you perceive the company that is marked out by that badge on the hood. In the case of the Mercedes-Benz three-pointed star, worn proudly on the E-Class' new nose, chances are good that your associations are top-notch. Priced right, good in every area, terrible in none, this is another Mercedes-Benz all-arounder that'll find a happy home in quite a few garages. 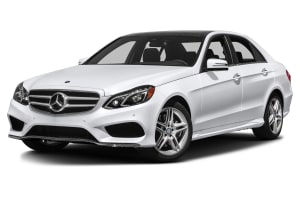