View All Specs
This could have been something great. Last fall, Mitsubishi slapped its triple-diamond badge on a dainty little hatchback called Mirage, offering plenty of functionality and 44 miles per gallon on the highway, all starting at a super-low $12,995. For budget shoppers, this seemed to be a good thing – not to mention a much-needed breath of fresh air for the company's waning US automotive arm.

I will fully admit to being a bit harsh on the Mirage following its debut at the 2013 New York Auto Show, often making it the butt of jokes with my colleagues. But at the end of the day, I love cheap, basic, honest little cars like this, and I wasn't prepared to write off the Mirage until I spent some time behind the wheel. After all, on paper, a Mazda2 looks pretty unremarkable, and yet it's one of my favorite small cars to drive.

Much as I wasn't looking forward to putting my foot in my mouth, I was sort of hoping to feel the same way about the new Mirage. It's a bland package, but it could have been filled with the same spunky spirit and well-meaning composure of vehicles like the aforementioned Mazda, or even stuff like the Honda Fit or Chevy Spark and Sonic.

It could have. And in this day and age, it should have. 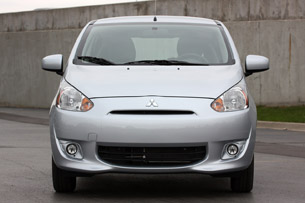 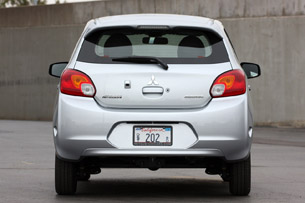 Let's start with first impressions where, if I'm honest, the Mirage doesn't even look like a new-for-2014 model. There's this sort of charming, cartoon-like quality to the design of many modern subcompacts – look at the oversized features of a Spark, Fit or Fiesta to see what I mean. Their big eyes, tall glass area and seemingly oversized mirrors are often endearing – cute, really. But the Mirage just doesn't have it. I suppose it didn't help that my test car was painted in this gray-as-the-sky Starlight Silver, but even in flashier Kiwi Green or Plasma Purple, there's no escaping that this Mitsu already looks mid-Nineties dated.

At 148.8 inches long, 65.6 inches wide and 59.1 inches tall, the Mirage is ever-so-slightly larger than the aforementioned Spark, yet it offers a wee bit less passenger volume than the taller Chevy. That means the Mirage is easy to drive and easy to park, with good visibility all around. Puny 14-inch wheels are placed at all four corners, wrapped in 165/65-series tires – if you want bigger duds, you'll have to look to the aftermarket. The 14-inch rollers are standard across the board, though ES models are fitted with the seven-spoke alloys you see here. Larger rolling stock might – might – help the Mirage's driving dynamics, but as I would come to learn, it's still pretty much a lost cause when it comes to driver involvement. 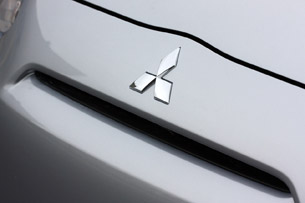 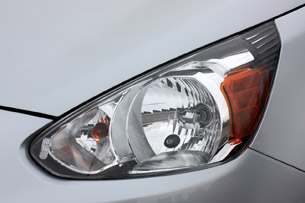 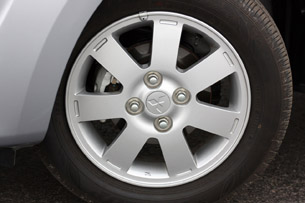 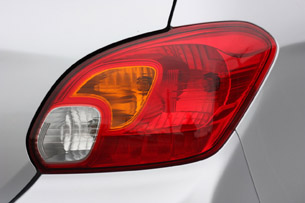 Power comes courtesy of a 1.2-liter MIVEC inline three-cylinder engine delivering 74 horsepower at 6,000 rpm and 74 pound-feet of torque at 4,000 rpm. Considering the Mirage's curb weight of just 2,051 pounds in ES trim with the continuously variable transmission, it's an appropriate amount of power (the heavier Spark makes due with just 84 hp, after all), and around town, running between stop signs and red lights, it's mostly adequate.

The engine's vibrations are strong enough that you can actually feel them through the steering wheel.

Mitsubishi estimates the Mirage will accelerate to 62 miles per hour in 12.8 seconds with the CVT, or a more spritely 11.7 seconds with the five-speed manual. Yes, that's slow, and while it's not completely horrible when pulling away from a stoplight in traffic, that lack of grunt is very noticeable during highway passing and on-ramp merging moments. Pack the Mirage with four adults as we did (let's say, 600 pounds), and it's pretty brutal, as it can be with some other cars in this class. Drag race a Chevy Spark, for example, and you'll likely keep an even pace.

Ford has really set the standard for modern, three-cylinder engines – its excellent 1.0-liter EcoBoost unit being highly regarded around the world for its smoothness and efficiency. And while Mitsubishi certainly has the economy thing under control (the Mirage will easily hit its 37/44/40 city/highway/combined mpg ratings), smoothness is an issue. Fire up the Mirage, and the engine shudders to life. At a standstill, the engine's vibrations are strong enough that you can actually feel them through the steering wheel and inside the car. 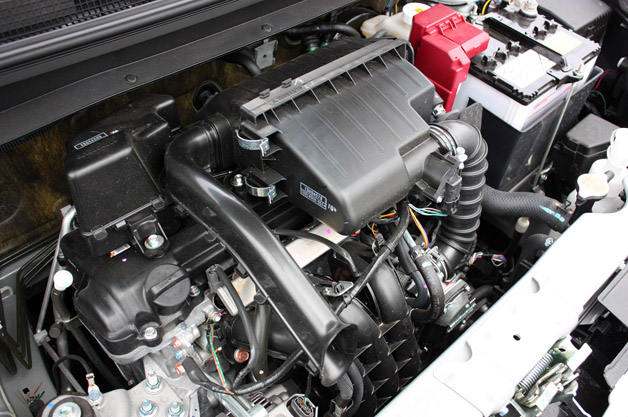 A five-speed manual transmission is standard, but my car arrived fitted with Mitsubishi's continuously variable unit that allows for those excellent fuel economy numbers. It's not nearly as easy to live with as Nissan's Xtronic CVTs, but it works just fine, and that's just about all that needs to be said. Driving the Mirage is a noisy experience, with not just engine din and transmission drone present, but also a fair amount of wind noise. I've heard that the manual setup is far more rewarding, and honestly, anything that offers a stronger connection between car and driver in the Mirage would be welcomed.

And then there's the handling. The Mirage's electric power steering is downright terrible. It's a setup that provides little-to-no feedback at any point during the action of cornering. On-center vagueness is plentiful, so driver confidence is in short supply. You cannot feel what the wheels are doing, so you're left playing guess-and-check as you head down the road. 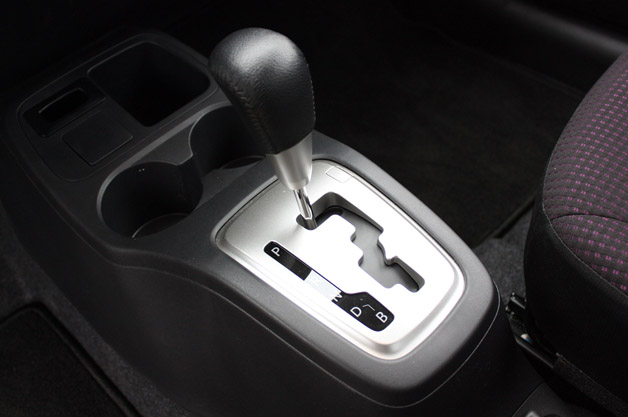 Credit where credit's due, however: the brakes are actually pretty good.

The suspension consists of a MacPherson strut setup in the front and a torsion beam in the rear. Here, too, things are pretty unfortunate. There is a ton of body roll, matched with a dollop of fore/aft pitch under acceleration and braking, and the suspension is just as crashy over broken pavement as it is vague in the turns. Credit where credit's due, however: the brakes are actually pretty good. There's linear, solid pedal feel, matched with adequate stopping power to slow all 74 of those horses down.

But decent braking can't make up for all of the Mirage's dynamic shortcomings. The Mitsu is, simply put, one of the worst new cars I've tested. And it's not because it's underpowered. Allow me to bring up the Mazda2 again – it only has 100 horsepower, but it's still one of the best small cars you can drive. The difference with the Mazda is that the chassis is tuned for driver involvement, whereas the Mirage truly feels like every facet of the driving experience has been engineered to be as disconnected and hands-off as possible. It's like an executive at Mitsubishi told his engineers, "Make me a cheap car," and gave no further instructions. Take a sharp turn in the Mazda2, and you'll be surprised at just how entertaining a lightweight, front-drive car can be. Take that same turn in the Mirage, however, and the massive body roll and lack of driver feedback will leave you discouraged.

The Mirage can accommodate 47 cubic feet of cargo – far more than the Spark.

The Mirage's interior doesn't help things either, with unsupportive, decidedly uncomfortable cloth seats up front and a completely flat rear bench (all done up in this weird – look closely – purple/black dot matrix pattern). In front of the driver is everything you need and nothing you don't, with an honest (if basic) instrument panel and easy-to-locate controls for all vehicle functions. And if you're blessed enough to have the ES trim, there's even keyless ignition, though the push-button start is located in a rather awkward position on the left side of the steering wheel (à-la Porsche). The plastics look cheap and don't feel particularly great to the touch, either. Even when you consider its $12,995 starting price, the Mirage's cabin feels discount and dated.

The rear bench folds flat-ish, meaning the Mirage can accommodate 47 cubic feet of cargo – far more than the 31.2 cubes available in the Spark. And if you're forced to sit in the back seat of the Mirage, it's not as cramped as you might think. Uncomfortable? Oh, yeah. But at least your knees won't be pressed into the front seatbacks. 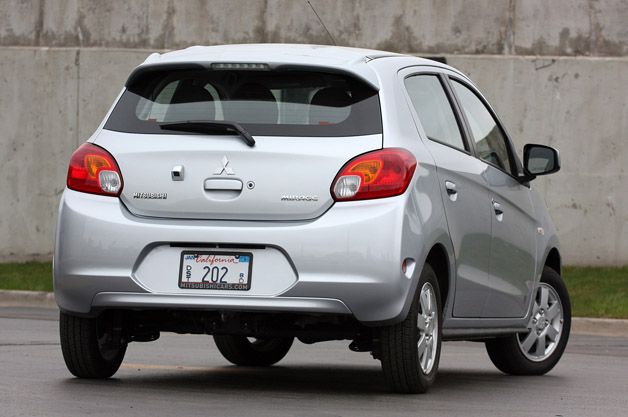 The cons far outweigh the pros when considering the Mirage.

Fully loaded, my test car arrived packed with Bluetooth connectivity, a navigation/infotainment system housed within a relatively large touchscreen interface, and a backup camera (notice the tumor-shaped protrusion on the car's rump). All in, a loaded Mirage ES will set you back $16,890, including $795 for destination. That's cheap, sure, but a top-shelf Spark will only set you back an additional $320, and you get things like better infotainment, heated leatherette seats, larger alloy wheels, a more modern cabin and better driving dynamics. As much as I want to say the Mirage works from a value proposition standpoint, the more features you add, the less sense it makes. And if you're just looking for basic, affordable transportation at the DE level, try the far roomier $11,990 Nissan Versa.

It's a shame the Mirage is such a dud. If there's one thing Mitsubishi could use here in the States, it's good, fresh product to bring people back into its showrooms. The Mirage's attractive price point will likely get the attention of the budget-minded set, but it's still not the best deal you can get. And while the Mirage did briefly hold the title of being America's most fuel-efficient non-hybrid, the 1.0-liter Ford Fiesta now bests it.

Sad to say, the cons far outweigh the pros when considering the 2014 Mitsubishi Mirage. What could have been a decent little subcompact is in fact an all-around poor product. And it should have been so much more. 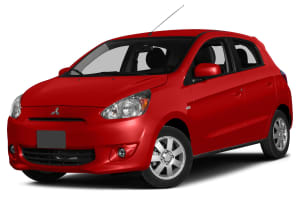