Opel brings in Valentino Rossi, Bryan Adams to jazz up the Adam Every notice than when an automaker brings in a fashion designer or celebrity to "design" one of its cars – and by "design", we mean give them fancy paintjobs – it's almost always a European city car? If it's not a Mini for the Life Ball, it's a special Renault Twingo, a '60s-style Alfa MiTo by an Italian artist or a Fiat 500 by Gucci. This time it's the turn of the Opel Adam, which GM's European brand has done up in collaboration with two well-known entities.

The first one, pictured above, is the result of a collaboration between MotoGP champion Valentino Rossi and designer Aldo Drudi. Done up with chrome and neon yellow, the special Opel features Rossi's signature and number 46 on the hood and an interior decked out in Dainese lather like Rossi's riding gear. Unveiled at the EICMA motorcycle show in Milan, this unique take on the Adam is being auctioned off on eBay to raise money for the Meyer Children's Hospital in Florence. 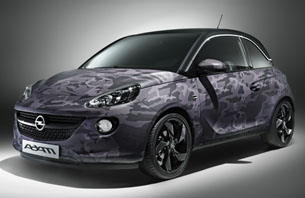 The second collaboration brings in a name you may not have heard of in a while: Bryan Adams. Not to be confused with Ryan Adams (the American singer), Bryan Adams is Canada's biggest rock star, but after gaining fame for tracks like "Cuts Like a Knife", "Summer of '69" and "(Everything I Do) I Do It for You", the multi-Grammy Award-winning musician turned to photography, shooting everyone from Michael J Fox and Dustin Hoffmann to Amy Winehouse and Queen Elizabeth II.

He designed the "Adam by Bryan Adams" (pictured right) with a subdued camouflage motif that will be produced in a limited edition of ten examples, with sales proceeds going towards Adams' global education campaign. Adams also shot a calendar based around the Adam, which will be unveiled together with the car at the Haus der Kunst museum in Berlin. Details in the trio of press releases below.
Show full PR text
Now available on eBay: ADAM designed by Moto GP Champion Rossi
2013-12-17

Rüsselsheim. A small car for a great cause. Today (17 December) the 'Opel ADAM & Vale for charity' auction is launched on eBay. The funds raised in the auction will be donated to the Meyer Children's Hospital Foundation – Meyer O.N.L.U.S. in Florence. The unique and funky car was completed in three months by Opel brand ambassador Valentino "Vale" Rossi and star designer Aldo Drudi. Aldo Drudi redesigned the livery and interior that is now fitted with Dainese leather. Just as visible is the creative influence of Valentino Rossi. The star of the Moto GP championship, who is also known by his nickname "The Doctor", has added his own personal touches to the individualization champion with numerous ideas. Therefore, for example, Rossi's racing number 46 in neon colors adorns the exterior while his own signature is written across the hood.

Valentino Rossi is excited to be part of the project: "I am very happy that the car has turned out so well and I hope to be able to participate in further projects: Together we can do a lot to support the children's hospital foundation Meyer O.N.L.U.S." says Rossi.

The Meyer O.N.L.U.S children's hospital offers a distinct approach that focuses on the child and his/her wellbeing and at the same time places emphasis on a number of activities that ensure the quality of the child's stay in hospital and that of the family. The hospital warmly welcomes the 'Opel ADAM & Vale for Charity' initiative – Tommaso Langiano, Director-General of the University Hospital Meyer and President of the Meyer Foundation says: "Opel together with Valentino Rossi and Aldo Drudi have shown us an act of generosity for which we express our heartfelt gratitude. The funds will be used for the activities of our games room, where children can play, participate in lessons and learn to read with the help of professional educators."

Milan, Italy: 'ADAM & Vale for Charity', a fully customized version of Opel's small city car is the result of Valentino Rossi's creativity combined with the experience and expertise of Aldo Drudi, a designer who has been collaborating with Valentino for years. The champion pair has developed an original and unique project to support a charity initiative sponsored by Opel: the Meyer Children's Hospital Foundation. The car will be put up for auction during a fund-raising event next December, organized by the Foundation to support the activities of the Meyer Hospital.

'Customizable from roof to wheels': Opel ADAM has channeled the creative energy of Valentino Rossi and Drudi, who have redesigned it not only drawing their inspiration from the Champion's graphic universe (such as Valentino's most widely known fetish images and the symbols most treasured by him) but intentionally reversing its image. For three months, a team of four people directed by Drudi worked to completely redesign the car livery, while Dainese leather was used for the interior trim.

"We've worked together as a real team; everyone has contributed not only his or her own expertise and ideas, but also true, enthusiastic support for a project that immediately appealed to Valentino and Drudi" – said Roberto Matteucci, Managing Director of Opel Italy.

The Meyer Children's Hospital is an example of Italian excellence in the public healthcare sector: it boasts an innovative approach centered on the young patient and his/her well-being and is aimed also at improving the quality of hospital stay for the patient's family. Besides high-quality pediatric specialty care and scientific research activities, the hospital offers a whole range of medical and hospital activities which are all creatively integrated with games and playfulness.

The Meyer Children's Hospital Foundation supports the hospital in carrying out scientific research work and excellence health projects with continuous upgrades of technological equipment. And that's not all: it invests in facilities to welcome children and make the hospital environment more comfortable for them while supporting their families.

"How could I resist the challenge?" commented Valentino Rossi. "The task was to invent a completely new car, and for a good cause. No sooner had I spoken with Opel than I was already discussing with Drudi how to design this special ADAM." "To tell the truth, the design phase took a very long time" – added Aldo Drudi – "It took us hours of hard work, but then you know Valentino, he is hard to please. And so am I. Scores of drawings were produced, phone calls were made and every time we decided to change everything and started all over again. In other words, it was exhausting but it was worth the effort."

"The car has turned out beautifully and we're happy that it will be used to support the Meyer Hospital. We hope that this choice fires up everybody with the same enthusiasm we feel, because we can accomplish a lot together", they concluded.

To complement the charity auction organized by the Foundation and scheduled for next December, Opel is promoting a further fundraising initiative: supporting the activities of the Florence Children's Hospital by visiting the www.ioaiutoilmeyer.it website. Here, you can easily make a direct donation.

The 'ADAM & Vale for Charity' car will be on display at EICMA, the international motorcycle exhibition – in Hall 14 Booth I/16 – for the duration of the show (until November 10th). Afterwards, it will be on display in the Milan ADAM Store, Corso Garibaldi, 19.

Rüsselsheim. The Opel ADAM is to be restaged and what's more, by an international superstar. The Canadian composer and rock-singer isn´t only an outstanding musician, he is also a respected photographer. In his studio in Berlin the artist photographs the individualization champion for a calendar entitled 'ADAM by Bryan Adams'. Furthermore, Bryan Adams created an ADAM according to his own artistic design – in a camouflage look. On January 23, the results will be unveiled at a vernissage in the museum Haus der Kunst in Munich and will be on show until January 26. The 'ADAM by Bryan Adams' in camouflage-look will be launched as an exclusive limited edition series of ten cars, the proceeds will go to the 'Bryan Adams Foundation' that looks after needy people the world over.

Tina Müller, Chief Marketing Officer, who was present at the shooting in Berlin is excited about the cooperation: "We´re happy that we were able to win such an excellent artist. That´s automotive photography as has never been seen before and one that is surprising coming from Opel. Opel is going to use the motifs in the communication around the ADAM in diverse ways. This campaign will deliver plenty to talk about – and that´s only one of the elements with which we want to position the brand as increasingly modern and as a lifestyle brand.

Bryan Adams had a lot of fun with the project and says: „With the Opel ADAM everything is possible."

As a motif designed by Brian Adams, the Opel ADAM joins the ranks of the prominent and world famous. The Canadian has already had Amy Winehouse, Michael Jackson and Dustin Hoffmann model in front of his camera. On the occasion of the golden jubilee, Bryan Adams was chosen to make a portrait of Queen Elisabeth II – today it´s a motif on a Canadian stamp.

The Opel ADAM was launched at the beginning of the year and now the model inspires experts and customers with its unconventional entrance and groundbreaking technology. The jury of the renowned red dot design award certifies that the ADAM cuts a good figure as a design-object. Just recently, the ADAM convinces the readership of the Auto Zeitung for the second time running and was awarded the 'Auto Trophy 2013' in the category city cars.

The ADAM is also top in all things connectivity. The IntelliLink-Infotainment-System is the main attraction. It makes the Eisenach-produced little car the best-connected small car: The system is compatible with iOS and Android-operated Smartphones; the Siri Eyes Free feature in the IPhone is also supported.

Furthermore, the urban lifestyle model offers a firework of further innovations, until now only seen in premium class vehicles. The automatic parking assistant, a heated steering wheel, a blind spot assistant and a fully integrated FlexFix rear bicycle carrier –exclusive to Opel - are unique in this segment.