DOT hopes to stem a sharp increase in pedestrian deaths

AOL Autos Staff
The New York City Department of Transportation has a new ad campaign to battle an increase in pedestrian deaths. They target drivers by reminding them unsafe driving can have dire consequences.

The ads, which are popping up on bus shelters and street advertising, feature people holding photos of loved ones killed by reckless drivers The New York Post reported.

In one ad, a Queens mother Audrey Anderson holds up a photo of her 14-year-old son, Andre. He was killed while riding his bike on Shore Front Parkway in 2005.

Another ad shows David Shepard holding a picture of fiancée Soyna Powell, who was hit by a speeding driver in 2009 while using a crosswalk in the Bronx.

"My fiancée was hit and killed by a driver while crossing Baychester Avenue," the ad reads. "This year would have been another anniversary."

In a city crowded with busy sidewalks and crosswalks, a rise in pedestrian deaths is cause for concern. The New York Post reported that while traffic deaths are down overall, pedestrian deaths have increased 15.5 percent since 2011. According to The Post, DMV statistics show 59 people were killed by speeders last year. Distracted drivers killed another 48 and 34 pedestrians were killed by drivers who failed to yield the right of way. 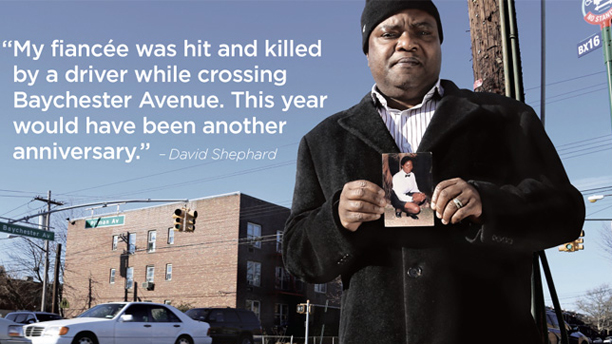