Danny King
Honda is joining a pre-existing vehicle-to-grid (V2G) demonstration project involving the University of Delaware and NRG Energy. Honda will use one of its Accord Plug-in Hybrid models as a back-up grid-power source when conventional power supply drops and demand surges. NRG Energy started funding its testing system with the university earlier this year.

In order to participate, Honda is installing a bi-directional on-board charger in the Accord PHEV. The test is part of a broader effort by automakers and other entities to explore how plug-in vehicles can help regulate the grid something that will become more common as renewable energy sources become more common.

Nissan has been running similar demonstration with its all-electric Leaf. Recently, Nissan tested its "Vehicle-To-Building" system in Japan, which involved a half-dozen Leaf vehicles powering an office building during peak demand, then having the cars re-juiced when electricity costs go down. In 2011, Nissan also started getting results from its "Leaf-to-Home" system, which uses the EV to power a house during blackouts. Check out Honda's press release below.
Show full PR text
Honda Joins Vehicle-to-Grid Technology Demonstration Project in Partnership with University of Delaware and NRG Energy

The Honda technology builds off of the research conducted by the University of Delaware and now supported by NRG Energy, Inc. NRG and the University of Delaware, through their eV2g joint venture, came online early in 2013 with the world's first revenue-generating vehicle-to-grid project, demonstrating the controls, regulatory requirements, and market participation rules for selling energy storage from vehicles into the PJM Interconnection Regulation Market. Honda is supplying an Accord Plug-In Hybrid with added V2G capabilities to the University's Science, Technology and Advanced Research (STAR) Campus to jointly investigate the potential of this technology to benefit the electrical grid, vehicle owners and society.

Using smart grid technology, the V2G system is able to monitor the status of the grid to determine whether the grid requires additional power sources that can respond rapidly, or the grid requires power demands that can absorb transitional power supply. Such a system has the potential to reduce or eliminate the fluctuation of the grid, which can occur more frequently when renewable energy sources are introduced to the grid. Electric vehicle owners potentially benefit from supporting a more stable power grid, which can lead to reduced utility costs for the vehicle owner.

The Honda Accord Plug-In Hybrid demonstration vehicle is equipped with a bi-directional on-board charger, which allows the vehicle propulsion battery to both charge from and discharge to the electrical grid. With an additional communication device, the vehicle receives signals from a grid operator via a charging station, and controls charge and discharge in accordance with the signals. When electric power is requested by the grid, the vehicle will discharge power from its battery. When the grid power supply exceeds demand, the vehicle proactively charges its battery.

About Honda Honda is a leader in the development of leading-edge technologies to improve fuel efficiency and reduce CO2 emissions. Honda has led the Union of Concerned Scientists (UCS) rankings of overall vehicle environmental performance since 2000, and a Honda vehicle has topped the list of America's greenest vehicles from the American Council for an Energy-Efficient Economy (ACEEE) for eleven out of the past twelve years. In 2006, Honda became the first automaker to announce voluntary CO2 emissions reduction targets for its global fleet of automobile, power sports and power equipment products and its global network of manufacturing plants. In 2011, the company set a new CO2 emission reduction targets for 2020, including a 30% reduction in CO2 emissions from its products compared with 2000 levels. 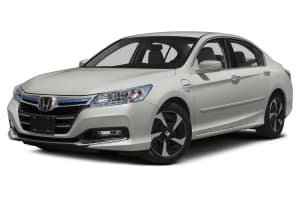