Noah Joseph
If at first you don't succeed, try, try again. So goes the saying, and Lexus seems to be taking it to heart. In addition to the hybrid versions of the Japanese luxury marque's conventional cars, Lexus is intent on offering a dedicated luxury hybrid. The original HS 250h failed to gain traction, so to speak, in the marketplace, and was quickly withdrawn from just about every market but Japan's. Lexus followed up with the CT 200h, exclusively packaging a hybrid powertrain into a premium hatchback form, but while it's been more successful than its predecessor, there's still room for improvement.

That's what Toyota and its premium division are going for with a slightly refreshed take on the CT. Spied completely undisguised (and in F-Sport guise) less than a month ago, the facelifted CT 200h is now confirmed for debut not at the LA Auto Show or the Tokyo Motor Show but at the Guangzhou Motor Show that's set to take place at the same time in China.

Although Lexus hasn't revealed much in the way of details and only two images, it's plain to see that what we're looking at is a mildly refreshed version of the existing CT 200h. The front end is now dominated by the spindle grille that adorns the rest of the Lexus range, flanked by reshaped headlamps. The rear end has been updated as well, but whether the cosmetic changes are joined by any mechanical ones – or, for that matter, if the changes made will be enough to put the hybrid hatchback ahead in the sales curve – remains to be seen.
Show full PR text
NEW LEXUS CT 200h TO DEBUT AT THE 2013 GUANGZHOU MOTOR SHOW
WORLD PREMIERE ON NOVEMBER 21, 2013

Brussels, Belgium - Lexus announced today that the world premiere of the new CT 200h will take place at the 2013 Guangzhou Motor Show in China, on November 21, 2013.

The CT 200h was introduced in 2010, and was the world's first full hybrid luxury compact car.

All other details about the new CT 200h will be revealed at the upcoming Guangzhou Motor Show. A press conference will be held on November 21 at the Lexus booth, Hall 5.1 in the China Import and Export Commodities Fair Complex. 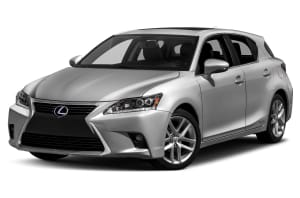