Sebastian Blanco
Compared to last year's model, there's not much that's new in the 2014 Toyota Prius Plug-In hybrid –except the price tag. The nominally updated PHEV will lose $2,010 off of its base price while keeping all of the tech and options from the 2013 model. The new base model will therefore start at $29,990, while the Prius Plug-in Advanced model gets an even bigger cut – $4,620 - and will now start at $34,905. Those prices do not include destination fees, which Toyota has not revealed (note: they were $810 for 2013). The price cut comes after many other plug-in vehicles in the US have seen their MSRPs fall and Bloomberg says Toyota's mission here is to push up sales numbers. The PHEV Prius's sales are up only slightly in 2013, with 7,974 sold through September. In the same time period in 2012, Toyota sold 7,734 units. You can find additional details pertaining to the vehicle's pricing and packages in the press release below – special Blizzard Pearl paint, for example, will cost you $395 - but the real fun comes when we look to Japan's model.

That's where the new Prius PHV gets a visual refresh (pictured), including available eye-catching two-tone paint, new LED lighting and new wheels, according to Indian Autos Blog. On the inside, there's a new padded smartphone compartment and available dark wood grain accents. We enquired to see if any of these goodies will make it to the US, and Toyota's Cindy Knight told AutoblogGreen that she was "not aware of upcoming cosmetic tweaks for the US version." Given that the official US press release includes an image of one car and the caption, "2012, 2013 and 2014 Toyota Prius Plug-in Hybrid," we're gonna go out on a limb and say the upgrades are JDM only.

We're less clear on the manufacturing changes that Indian Autos Blog mentions. Apparently, Toyota will make its home-market 2014 Prius PHEV with upgraded welding equipment that helps "new spot welds contribute to a slightly enhanced body rigidity." We'd expect something fundamental like that would be used in Prius Plug-in Hybrids destined for any market, but are still awaiting confirmation.
Show full PR text
2014 Toyota Prius Plug-In to Start Under $30,000 TORRANCE, Calif., Oct. 9, 2013 – It just got a little easier for drivers to maximize their fuel savings and be environmentally responsible.

Toyota's most advanced technology passenger car, the Prius Plug-in, will be available to customers at a substantially reduced price beginning with the 2014 model year.

Production of the 2014 model year Prius Plug-in begins in October with pricing taking effect when these models arrive in showrooms in November.The Prius Plug-in qualifies for a Federal Tax Credit of up to $2,500 in addition to the State of California's Clean Vehicle Rebate Program (CVRP) which offers a $1,500 rebate. Information about the Federal Tax credit and vehicle eligibility can be found on: http://www.irs.gov/businesses/article/0,,id=219867,00.html


*Prices in Hawaii will vary. 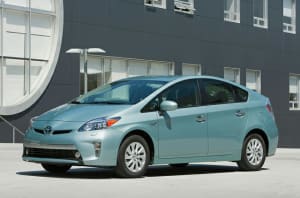