The Walking Dead, the hit zombie apocalypse show on AMC, has enjoyed a marketing tie-in with Hyundai for two seasons now. If you've watched the show, you'd no doubt seen Rick Grimes, his sociopath-in-training son Carl and emerging hero Glenn Rhee avoiding the dead behind the wheel of a light-green Hyundai Tucson. That relationship expanded beyond the show when Hyundai brought an Elantra Coupe-based Zombie Survival Machine to last year's San Diego Comic-Con.

For this year's Comic-Con, the new Zombie Survival Machine is just a touch faster, funkier and deadlier. Based on a Hyundai Veloster Turbo and built by Galpin Auto Sports to decapitate as many Walkers as possible, this four-door hatch has been heavily modified. The headlights, taillights and windows are all protected with a combination of wrought iron and chainlink fencing. There's also plenty of armor on the body panels.

Passive zombie killing features abound, like the "horde plow" on the front bumper and sawblade grille. But by and large, the majority of the Veloster Turbo Zombie Survival Machine's offensive power comes from a combination of firearms and chainsaws. A .50-caliber machine gun is mounted on the roof, along with a pair of assault rifles on the hood. Each door features blades along the base and a machine gun. Melee weapons can be found in the back, including a spiked baseball bat or katana.

We see a few issues with the Veloster Turbo ZSM. Clearly, the creators have never read Max Brooks' excellent book, World War Z, otherwise they'd know that flame throwers (of which we counted three) are ineffective against the dead, as are rapid-fire weapons. Our nerdy minds aside, this is a pretty cool one-off concept from one of the very best shows on television. But if you think you can do better, Hyundai has set up an app for fans to design their own Zombie Survival Machines. The winning entry will get their car built and put on display at New York Comic-Con in October. Now, if you'll excuse us, we need to see if we can retrofit our long-term Veloster Turbo into a Zombie Survival Machine.
Show full PR text

Last night, The Walking Dead Veloster Zombie Survival Machine was unveiled at The Future US Booth at San Diego Comic-Con.

Hyundai also developed a unique configurator app, the WalkingDeadChopShop.com, that allows fans to design a custom zombie survival machine, using the Hyundai Veloster Turbo, Santa Fe or Elantra. The submitted designs will be entered into a contest and the winning design will be constructed and unveiled in October at New York Comic Con.

"The Hyundai Veloster Zombie Survival Machine is the ultimate car for The Walking Deadfans and anyone who wants to survive a zombie invasion," said Steve Shannon, vice president, Marketing, Hyundai Motor America. "We are excited to share this post-apocalyptic Veloster with fans and we can't wait to see all of the fan design submissions."

For a look at the Machine's build check out: http://galpinautosports.com/2013/07/the-walking-dead-zombie-survival-machine/ 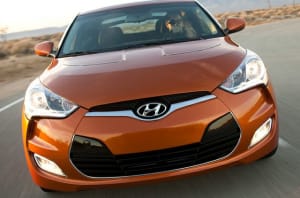