View All Specs
Left In The Weeds, But Okay With That

Seventy years ago, the Jeep Patriot would have been amazing. In 1941, the year the original Jeep was drawn up, the power windows, air conditioning and automatic transmission in this Patriot Latitude were features only available in cars like Packards.

The Patriot has features and dynamic capabilities unheard of back when the Jeep was an idea, not a brand. Seventy years of progress, perspective and turmoil has a way of turning the formerly amazing into the mundane. Since its introduction, along with its Compass close relation, this Illinois-built crossover has been viewed as the Fauxlex of Jeeps. It's based on the defunct Dodge Caliber, which itself shares the Mitsubishi GS platform, ensuring a complete lack of underlying Jeep DNA. The only link back to Karl Probst and his seminal design is some squared-off styling and the impression that the Patriot was also designed over a marathon weekend, just like that first Bantam proposal.

There have been a couple rounds of updates to the Patriot to address previous foibles including its former horror chamber-like interior, along with moves to banish the traces of econobox from its styling. We wanted to sample these changes and see just how far the Patriot can go on its reserve of charm.

After two revisions, the interior has finally atoned for the original.

The Patriot has always had Jeepy good looks. Boxy and reminiscent of the original Cherokee, the Patriot recently got subtle styling changes. These inconsequential tweaks follow an "If it ain't broke, add cladding and move the fog lamps" philosophy. There are some angles, like the rear three-quarter view where you can see through the sharply folded metalwork to the GS platform underneath. A redesigned lower rear fascia does a better job at hiding the muffler, a small change that pays off classy. For what it is, the Patriot pulls off looking like a Jeep.

The interior may trump the class of 1939, but it was massively upgraded for 2011. Better materials now cover the cleaned-up dashboard design, which has been improved ergonomically. Finally, after two revisions, the Patriot's interior has atoned for the original's shameful outfitting. Soft padding for the upper front door panels even helps the Patriot trump some of its hard-doored competition. The center armrest with two storage areas and a chunky steering wheel festooned with easy-to-master controls are also newer worthwhile enhancements. Compared to the original Patriot, standard upholstery is now premium cloth, door switches and ancillary controls are newly backlit and cruise control is standard, too.

UConnect is, as always, incredibly usable and friendly.

Jeep has done its best with what it's got, but the low roof and smallish glass area still make the driver feel boxed in. Looking around, it's a reminder of how 1980s cars were put together, the Patriot's $17,695 base price is the reason behind its retro-style assembly. Comfort in the chair-height seats is good. They're minimally bolstered, but the 17-inch tires aren't grippy enough for that to matter.

Shortcomings aside, the Patriot's interior is a nice one in a class plagued by Cabinus Crappyitis. Just about everything is right. Three big knobs for climate adjustment could hardly be more clear. The gauges are equally intuitive, and the chunky leather-wrapped Chrysler corporate wheel with its slick back-of-spoke controls puts unexpected functionality literally at your fingertips. Latitude trim starts at $19,745 for a front-wheel drive model, and it carries significantly more equipment and a spendier bottom line than the $16,995 Patriot Sport. Most people are going to want the power windows, air conditioning, keyless entry and power heated mirrors that the Patriot Latitude comes with, but they may not want to have to pay four grand extra for them. Uconnect is, as always, incredibly usable and friendly, and would have seemed like super-advanced alien technology during the Apollo moon landing, let alone 1941.

Freedom Drive I is essentially all-wheel drive with a locking feature.

The Patriot Latitude 4x4 we drove (a 2012 model, though there were no significant changes for 2013) has a starting price of $21,445, a number that sees this Jeep mini-ute wading into waters infested by the Honda CR-V, Toyota RAV-4 and even the new Ford Escape, all of which sell like gangbusters. Going with the all-wheel-drive Patriot nets the 2.4-liter four cylinder that cooks up 165 horsepower and 172 pound-feet of torque, which is what you want if picking either version of the Continuously Variable Transmission. Ours arrived with the CVT2 with Autostick manual control, but without the low-range of the CVT2L that's also available. This setup, called Freedom Drive I, is essentially all-wheel drive with a locking feature. Freedom Drive II adds the crawl range and extra skid plates underneath. You'll be able to spot those models by the Trail Rated badges on their front fenders.

In 1940, the 2.4-liter engine would have seemed almost as incredible as a nuclear reactor under the hood. There's an aluminum block, four valves per cylinder and variable valve timing on both camshafts. The intake manifold is molded polymer and its specific output is higher than any mass-produced automobile engine was capable of 70 years ago. It's a modern engine that's not at all like the Willys "Go Devil" side-valver in the first Jeeps. None of that, however, makes it as smooth or refined as the class leaders. This is a growly mill.

The engine drones on as endlessly as an intoxicated uncle during the holidays.

Back then, most drivers would have chosen the five-speed manual transmission and marveled at it an age of three speeds. Drivers going for this CVT would have hated it as much, possibly more, than we currently do. To many of us on staff, CVTs are the devil. Some are better than others, but the Patriot feels sluggish and slow-witted with this transmission, and the engine drones on as endlessly as an intoxicated uncle during the holidays, and it's even less appealing to listen to. ( Rumors suggest the Patriot will broom the belts in favor of a traditional automatic soon).

The ride and handling of the Patriot would have been a revelation during the WWII era, and they're not bad now. There's good compliance in the suspension, and the impression from behind the wheel is one of sufficient solidity. Pitch it into a corner hard, and the Patriot leans over enough to let you know that you really shouldn't be doing what you're doing. That's okay in this instance, because you can nudge this little crossover box off the pavement and it'll more than hold its own, especially with the Trail Rated chassis enhancements. Braking, however, is an experience lifted directly from the 1940s – not really, but there is a surprising lack of effectiveness when you step on the brake.

Patriot may still have it in the woods, but on the road, there are newer and more refined choices.

Try too much maneuvering with the Patriot, and you may end up with a few carsick passengers, especially the ones hanging out on the exceptionally squishy-foamed rear seat that's sort of like perching on an overturned bucket. What the Patriot lacks in wheelbase, it makes up for vertically, so at least the footwells seem very deep. Behind the rear seat is a decently sized cargo area, and one nice touch is an integrated flashlight that can be popped out and used when needed, then snapped back in to recharge.

The Jeep Patriot's utility is there, mainly because it's a squared-off little wagon, and there's also a smart roof-rail system that seems ready to have your stuff lashed to it. The small crossover segment has really heated up, though, and where the Patriot was once doing battle with the old versions of the Escape, RAV-4, CR-V, Hyundai Tucson and Kia Sportage, all of those vehicles have been redesigned. The Jeep may still have it in the woods, but on the road, there's a lot of newer and more refined choices. The Patriot remains the only way to get into something with Jeep looks and character for this kind of money, so some of the rough edges are likely to be forgiven by those who just really want to get into something with a seven-slot grille. Whether you're one of them or not will be clear by how charmed you are after a drive. 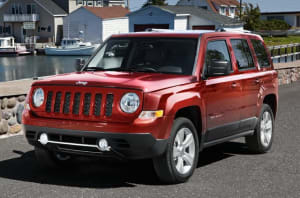