The business case is pretty simple: BMW wants a green (or blue, if you like) "liaison" line of models between its standard lineup of cars and the upcoming mega-wow i models. This maximizes choices, fills all niches, and buys time while BMW waits to get those i cars just right before the start of deliveries.

These ActiveHybrid full parallel-hybrid electrics are also acting as the closest BMW can get to its amazing range of turbocharged diesel motors that not enough people want in North America and Asia. In European terms, there is no business case for these hybrid cars apart from curious and cash-heavy early technology adopters, since the EU is awash in BMW's wonderful oil-burners. Those beloved turbocharged diesels would be a far better product in North America and Asia as well, but, hey, let's not get all pipedream-y, now. And, no, we're not trolling here.

So BMW has created a lineup of pretty darn good heavier and pricier models, coining the new brand word ActiveHybrid with versions of the X6, 7 Series, 5 Series and now the 3 Series, called "F30h" internally in this case. The efficiencies gained by this powertrain are fairly good as well, so we'll try tempering our doubts.

The ActiveHybrid 3 adds 305 pounds of curb weight, mostly between the rear wheels.

Versus the 335i sedan, the ActiveHybrid 3 adds 305 pounds of curb weight for a grand total of 3,860 pounds. Most of that weight increase happens under the trunk floor thanks to the 96-cell lithium-ion battery pack between the rear wheel wells. This changes the fore:aft weight split from 51.5:48.5 percent in the 335i sedan to 49.7:50.3 percent in the ActiveHybrid 3. Seems small to notice, but it does change the comportment of the sedan to a more dynamically neutral feel. We also lose 3.2 cubic feet of trunk space.

While the electrical guts added pump up the curb weight, they also thankfully add some welcome juice to the throttle play. Versus the 302 horsepower and 295 pound-feet of torque of the 335i with the "N55" twin-scroll turbocharged inline six-cylinder engine, the ActiveHybrid 3 adds an electric motor integrated in the housing of the eight-speed Steptronic transmission. This e-motor by itself is good for 54 hp and 155 lb-ft of torque from the moment you graze the pedal. The actual power and torque numbers that result are exactly what we reported for the ActiveHybrid 5 back in January of this year: 335 hp and 332 lb-ft.

At least the ActiveHybrid 3 weighs 505 pounds less than its larger 5 Series sibling and therefore the overall drive experience is more suited to our expectations of a BMW carrying the 35i engine. We require at least a little "ultimate driving machine" in our ultimate driving machine, especially if we're paying a base price on delivery of $50,195 ($7,395 above the 335i) when the ActiveHybrid 3 leaves the lot for home. And the characteristic Liquid Blue metallic paint job that screams "ActiveHybrid"? Costs $550 extra right off the bat. Jet black or Alpine white are the only colors that cost zero dollars.

There are four separate model lines you can choose from to enhance your active hybridization – Sport, Modern, Luxury and M Sport – each of them prettying up both the exterior and interior. Ours was a Sport Line car (add $1,700) that stresses the color red, while Modern goes with shiny chrome details, Luxury with brushed chrome and M Sport runs with blue. Our car also had the no-cost optional 18-inch Streamline design alloy wheels that slightly enhance aerodynamics and brake cooling, plus they look very "AH".

In some ways you have a heavy BMW 335i Sport Line on your hands.

As we said, this 3 Series setup with its ActiveHybrid powertrain and drivetrain is dynamically superior compared to the heavier and larger ActiveHybrid 5, so unless you absolutely need a larger car, stick with this smaller carriage. Besides, it's quicker off the line than its big brother – an estimated 5.2 seconds to 60 miles per hour against the Activehybrid 5's 5.3 seconds. Wow.

About all of the hybrid action that happens is dictated by the attitude you choose for the car through the touchy-feely-sounding Driving Experience Control to the left of the console lever for the eight-speed Steptronic transmission. While in Eco Pro and Comfort modes, the hybrid electric system is showing us everything it is programmed to do, including the standard Stop-Start function at intersections with red lights or in stop-and-go traffic. Once in Sport or Sport+, you in some ways have a heavy BMW 335i Sport Line on your hands, though some energy recuperation for the lithium-ion battery pack still happens as well as other small efficiency moves. And there is still the added boost at take-off of the parallel electric motor.

Fuel mileage is said to improve by an average of 25 percent over the stock 335i sedan.

All else aside, though, this N55 six-cylinder is simply an exceptional motor, and using it as the base material for any car almost automatically makes that car really good. Even with the e-motor and/or N55 engine chiming in seamlessly and often (pure EV driving extends only to 2.5 miles max and at an average speed no greater than 22 mph before the internal combustion engine switches back on), the overall driving comfort of this hybrid design works extremely well. Fuel mileage per gallon with the ActiveHybrid tech on board is said to improve by an average of 25 percent over the stock 335i sedan. The car has an official EPA rating of 25 miles per gallon in the city and 33 on the highway, though, which likely underestimates how it will perform in the real world.

There is also a coasting mode for the drivetrain, a state of forward progress more fanciful companies call 'sailing'. When you let off the throttle on a downhill portion of the highway (only up to 100 mph while operating in Eco Pro mode), the internal combustion engine decouples from the driveshaft to the rear axle and shuts off, thus emitting no pollutants nor slowing the car down via the engine's own friction. It is a very interesting experience watching needles drop to zero. On some of the downhills we were actually gaining speed, so when they say decoupled, they mean it.

All the while, as you play with the various calibrations over different road situations, there is a small blue number readout at the base of the instrument cluster telling you how many "free" miles you are awarding yourself thanks to having bonded with the hybrid system.

Further, as on the ActiveHybrid 5 we tested, when you opt for the $2,150 Navigation Professional onboard system, its intelligent ECU syncs up with the car's ECU, the chief benefit being to chart out the entire mapped route and anticipate hills, descents and curves so as to maximize fuel savings at all times without slowing the journey. This feature also permits a fully accurate, instantaneous recalculation of true range when weighing remaining battery energy in parallel with the fuel supply over the chosen route.

To make certain the ActiveHybrid 3 can be more than just quick in a straight line despite all its green credentials, you can still opt for an M sport suspension calibration, variable sport steering ($1,000 together) and crisper shift mapping with the sport automatic that then gets a dedicated console lever design ($500).

It'll be very interesting to see for how long BMW carries on the ActiveHybrid offerings once plans for the opening salvo of BMW i models are all realized in a few years. That's the challenge with these nonetheless perfectly valid hybrid-electric Bimmers: It feels like a placeholder solution while Munich waits eagerly to start selling the dense i technologies it cares about more. This ActiveHybrid 3 really is as good as BMW needs it to be and, to their credit, they admit that the sales figures sought are "realistic".

A new-gen 330d and 335d would be exceptional, lighter and more efficient. Or even an ActiveHybrid diesel with these. But we'll leave the business case stuff to the experts. 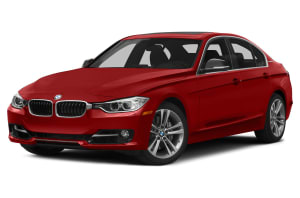