Jeffrey N. Ross
When it comes to the M version of the BMW 6 Series Gran Coupe, we've already seen spy photos and video of the car testing, but we've yet to see any shots of it in production trim until now. The new M6 Gran Coupe has done plenty of testing on the Nürburgring, but Car Magazine snapped a picture of the car sitting idle at the 'Ring, which was reportedly on hand for a BMW event.

Differing from the 640i Gran Coupe, this new four-door M6 looks to have the same aggressive body kit as its coupe counterpart, including the massive front air intakes and vented front fenders. The M6 GC does appear to be getting a unique design for the 20-inch wheels not currently available on other M6 models. Also like the recently released M6, key differences inside the M6 Gran Coupe include an M-exclusive steering wheel that has been completely redesigned from the 640i Gran Coupe and gets the signature red and blue stitching, a different shifter and bezel for the seven-speed M Double Clutch Transmission ,and we can also see that this M6 will be equipped with the Auto Stop-Start feature.

Keeping with the M6 similarities, power will almost certainly come from BMW's 4.4-liter twin-turbo V8 that is currently rated at 560 horsepower and 500 pound-feet of torque. No word yet on pricing, but like the 640i Gran Coupe, the M6 Gran Coupe will likely be positioned between the M6 Coupe ($106,100) and M6 Convertible ($113,100). BMWBlog says that the M6 Gran Coupe will make its big debut in January at the Detroit Auto Show before going on sale next summer. To see full shots of the undisguised M6 Gran Coupe, head on over to Car Magazine. 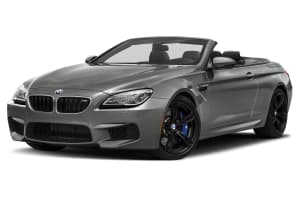