Between recent word of a new turbo engine in the works and these latest spy shots, there is no doubt Subaru is working on a faster version of its sporty BRZ coupe. Our spy photographers snapped these images of an interesting-looking BRZ testing around the Nürburgring that, upon closer inspection, is proudly displaying the STI badges.

Right away, we can tell something is special about this car from its aggressive body kit including a front chin spoiler and extended lower side sills. This car is also fitted with 15-spoke wheels that aren't hiding the red STI center caps and help show off the bigger brakes and STI-branded brake calipers. Of course, you can't miss that adjustable rear wing that replaces the BRZ's regular spoiler, but we're guessing this is more for aero testing rather than a production-ready piece. There are also fatter exhaust outlets on this prototype that should help give this car a deeper growl.

It isn't clear where the turbo engine fits in with this potential BRZ STI model, but with auto show season upon us, we get the feeling we'll be finding out much more about a sportier version of the BRZ sooner rather than later. 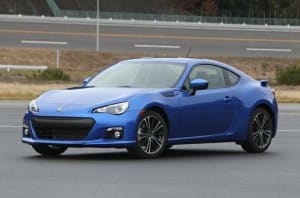