THe PHEV starts at $33,745, and the Feds will subtract a tax credit worth up to $3,750. Then, if you live in California, where the Energi now qualifies for the green carpool lane sticker, the state will offer you another $1,500 rebate. That brings the total lowest price down to $28,495 in the Golden State, if you qualify for all the incentives, minus whatever you think the HOV lane access is worth.

Now that the C-Max Energi has been approved for the Green Clean Air Vehicle Sticker, Ford says it will be likely to get the same benefit in other states with similar carpool laws, like Maryland, New York and Virginia. The catch, in California at least, is that there are only 40,000 of these special green stickers available for all qualifying cars from any automaker, and they will be given out first come, first served.
Show full PR text
Ford C-MAX Energi Plug-in Hybrid Qualifies for California Carpool Lane Access and Incentives Up to $5,250 SACRAMENTO, Calif., Oct. 23, 2012 – Californians looking to avoid near $5-per-gallon gas will soon be able to buy the C-MAX Energi plug-in hybrid, potentially save $5,250 off the purchase price and enjoy high-occupancy vehicle lane (HOV) access.

The C-MAX Energi was just approved for the Green Clean Air Vehicle Sticker as part of the Clean Vehicle Rebate Program (CVRP).

California C-MAX Energi customers can now apply to receive a $1,500 state tax rebate when purchasing or leasing the vehicle for 36 months or longer. In addition to the state rebate, C-MAX Energi will qualify for the existing $3,750 federal tax credit – making America's most affordable plug-in hybrid even more affordable for Californians at $28,495 after the federal tax credit and state tax rebate.

The approval also paves the way for the C-MAX Energi to be approved in other states with carpool lane plug-in vehicle incentives, such as Maryland, New York and Virginia.

"We're pleased with California customers' early interest in the C-MAX hybrids, our first dedicated hybrid-only nameplate in North America, in the No. 1 hybrid market in the U.S.," said Michael O'Brien, Ford electrified vehicle marketing manager. "The C-MAX Energi is the most affordable, most fuel-efficient plug-in hybrid with the longest overall range for any utility or compact vehicle on the market today – this extra carpool lane incentive and rebate will help Californians go further with Ford in every sense of the phrase."

The C-MAX Energi achieves up to 21 miles in all-electric range – more than triple Toyota Prius plug-in hybrid's six-mile all-electric range. This means that at least one leg of the average work commute – reportedly 20 miles each way – could be completed each day on electric battery charge only, allowing customers to save gas as they face traffic congestion in their commute. A study by the United States Department of the Treasury estimates congestion consumed an extra 1.9 billion gallons of fuel in 2011, approximately 5 percent of all gasoline used.

CVRP is funded by the California Environmental Protection Agency's Air Resources Board (CARB) and administered statewide by the California Center for Sustainable Energy (http://energycenter.org/index.php/incentive-programs/clean-vehicle-rebate-project).

Access to HOV lanes, plus the C-MAX Energi's combination of fuel-efficient highway driving and electric-powered city driving is more important than ever with the growing trend of commuters spending more time on the roads. A recent study from New York University's Rudin School of Transportation shows today's commuters are on the road longer than ever before, and the number of people who commute more than 90 miles to work has doubled over the past 10 years. The all-new Ford C-MAX Energi is America's most fuel-efficient plug-in hybrid with an EPA-certified 108 miles-per-gallon equivalent (MPGe) city rating, 92 MPGe highway rating and 100 MPGe combined rating.

About Ford Motor Company
Ford Motor Company, a global automotive industry leader based in Dearborn, Mich., manufactures or distributes automobiles across six continents. With about 168,000 employees and about 65 plants worldwide, the company's automotive brands include Ford and Lincoln. The company provides financial services through Ford Motor Credit Company. For more information regarding Ford and its products worldwide, please visit http://corporate.ford.com 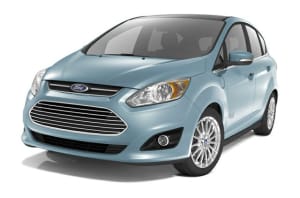