The U.S. federal tax credit for plug-in vehicles maxes out at $7,500 for cars with batteries that are 16 kWh or larger. The Ford C-Max Energi plug-in hybrid doesn't have that big of a pack, so the most the feds will grant you for buying one is $3,750. Still, the Energi's just-announced price of $33,745 is competitive in the plug-in space, since most people will end up paying $29,995.

Ford calls the Energi "America's most affordable plug-in hybrid," but that would seem to be just barely the case. Ford doesn't specify if the $33,745 price includes destination fees, which run $795 for the standard C-Max, but we think it does. With those fees, the Toyota Prius Plug-In is priced at $32,760, and it qualifies for $2,500 in federal tax credits, so it comes to $30,260 in the end. That's just $265 more than the Energi, and if Ford's stated price does not include the fees, then the Prius Plug-In will be cheaper. To make another comparison, the regular hybrid C-Max will cost $25,995, including destination. Both of these Ford vehicles will be available later this year.

The C-Max Energi is Ford's first production plug-in hybrid and has a 20-mile all-electric range and 95 miles per gallon equivalent rating. Ford's C-Max configurator website is here, but the plug-in model has not been added yet. It should go live later today.

*UPDATE: The configurator is now live, and the $33,745 price does include the destination fee of $795.
Show full PR text
C-MAX Energi Becomes America's Most Affordable Plug-In Hybrid as Ford Cuts Hybrid Technology Costs by 30 Percent DEARBORN, Mich., July 24, 2012 – Ford's new C-MAX Energi – expected to offer 15 class-exclusive features, a 550-mile total range and more than 20 miles of electric-only range that is at least triple Toyota Prius plug-in hybrid's EPA-tested range – will now be America's most affordable plug-in hybrid when it goes on sale.

C-MAX Energi delivers a projected 550 miles of total range, a 95 mpg equivalent (MPGe) and an electric-only top speed higher than the Prius plug-in. The new C-MAX Energi also has 60 more horsepower than the Prius plug-in hybrid considering full battery power, along with class-exclusive technologies such as hands-free liftgate and active park assist for easier parallel parking.

"The Ford C-MAX Energi is within financial reach for those who want a hybrid, but is also something customers will want to reach for because of its unique look and amazing value," said Michael O'Brien, Ford electrified vehicle marketing manager. "It offers exceptional fuel economy, better features and a better price tag than a Prius plug-in hybrid, which we think will help make C-MAX Energi one of our most attractive vehicles for import customers."

Ford expects about half of C-MAX buyers to trade in competitive models – one of the highest conquest rates of any Ford vehicle. C-MAX Energi will soon be available for order at Ford Certified EV Dealers. Starting today, anyone interested can go online to build and price their ideal plug-in hybrid at this site.

Ford calls C-MAX Energi a "hybrid-plus" because it not only operates just like C-MAX Hybrid, but also features an external charge port and larger lithium-ion battery pack so owners can plug in the vehicles to fully charge the battery using either a standard 120-volt outlet or the available 240-volt charge station. The vehicle also is expected to be capable of making trips of more than 20 miles in electric-only mode and longer trips of as much as 550 miles on a single tank of gas and fully charged battery.

C-MAX Hybrid and C-MAX Energi figure prominently in Ford's rollout of five electrified vehicles this year. Ford's other electrified vehicles include:
Maximizing efficiencies
Starting at $33,745 – and eligible for a $3,750 federal tax credit – Ford is passing along to customers cost savings that have been achieved through various efficiencies, says Kevin Layden, director, Ford's Electrification Programs and Engineering.

For example, Ford has cut costs by bringing in-house the development and manufacture of many aspects of vehicles such as C-MAX Energi. The hybrid battery system, hybrid transmission system and software for C-MAX Energi all were developed in-house.

Further, by creating global vehicle platforms, Ford maximizes the use of as many shared parts and components across as many lines as possible to lower overall costs.

Ford's revamped Michigan Assembly Plant is the first facility in the world capable of building a full array of vehicles – gas-powered, electric, hybrid and plug-in hybrid – all on the same production line. That means C-MAX Energi is being built on the same line as C-MAX Hybrid, Focus, Focus Electric and Focus ST. More details about MAP can be found here.

Maximizing experience
While the C-MAX Energi nameplate is new to the U.S. market, the technology and design has proven itself already in other ways and in other places with its fresh, modern style that provides plenty of utility.

Since 2010, more than 144,000 units of the five-passenger C-MAX gasoline and diesel versions have been sold in Europe – where the market is growing for vehicles slightly larger than compacts like Ford Focus and smaller than SUVs like Ford Escape. Though Ford is concentrating on hybrid versions of C-MAX in the U.S., the designs of C-MAX Energi and C-MAX Hybrid are based on the gasoline- and diesel-powered European version.

Like C-MAX Hybrid, C-MAX Energi has projected total system horsepower of 188 – reaching a peak of 195 with a fully charged battery – stemming from the combination of a gasoline engine and a battery-driven electric motor. When powered by gasoline, C-MAX Energi uses the all-new 2.0-liter Atkinson-cycle four-cylinder engine – powerful and fuel efficient and among the most advanced non-turbocharged four-cylinder powertrains Ford has ever offered.

C-MAX Energi also benefits from 20 years of research and innovation behind the software and hardware technology it offers, incorporating many of the nearly 500 patents Ford holds in the area of hybrid technology.

For example, C-MAX Energi offers the latest generation of SmartGauge® with EcoGuide. Designed to help drivers get the most from C-MAX, information such as instantaneous fuel economy can be displayed on one of two 4.2-inch LCD screens, helping drivers more closely monitor how their driving behavior affects the vehicle's efficiency.

In the right cluster, redesigned imagery of green leaves shows overall driving efficiency. The left cluster shows Brake Coach, a feature that helps drivers optimize their use of the regenerative braking system so that driving range can be enhanced through proper braking techniques.

Available for C-MAX Energi is the MyFord® Mobile smartphone application that allows users to monitor charging, receive alerts, find charge stations, plan trips and do more from their smartphones or computers for an effortless transition to an electrified vehicle lifestyle.

Customers interested in the C-MAX Energi plug-in hybrid and C-MAX Hybrid should visit here. A video featuring C-MAX can be viewed online by clicking here.

About Ford Motor Company
Ford Motor Company, a global automotive industry leader based in Dearborn, Mich., manufactures or distributes automobiles across six continents. With about 166,000 employees and about 65 plants worldwide, the company's automotive brands include Ford and Lincoln. The company provides financial services through Ford Motor Credit Company. For more information regarding Ford and its products worldwide, please visit http://corporate.ford.com. 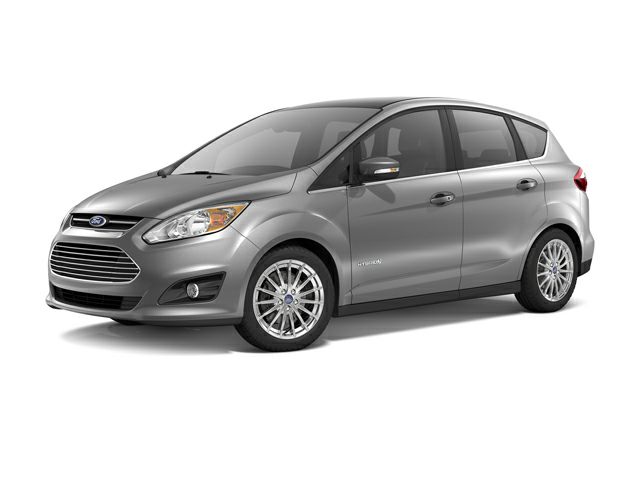