Kia is shortly expected to launch a new rear-wheel drive flagship sedan, but for now, the model seen here is the Korean automaker's new range topper. First introduced at the 2012 Chicago Auto Show in February, Kia has just announced that its 2013 Optima SX Limited will wear a $35,275 MSRP (*including delivery) price tag.

Carspotters will note the SX Limited's more aggressive front and rear bumper treatments (shared with the SX), as well as a chrome-highlighted decklid spoiler and 18-inch chrome alloys shrouding red-painted brake calipers. Power folding side mirrors mittened in chrome (not shown above) will also add to the brightwork count.

Inside, the daddy of all Optimas is loaded to its unique black tricot headliner with equipment, packing everything from heated front and rear Nappa leather seats (the fronts are cooled as well) to wood trim. Navigation, a backup camera and an Infinity audio system with Sirius are also standard fit. Oddly, the SXL is the only 2013 Optima to get an electronic parking brake.

The new model should be hitting showroom floors as you read this, and Kia has already fired up its configurator, too. For further details, scroll down or check out the Optima SX Limited's high-res gallery above.

IRVINE, Calif., July 2, 2012 - The 2013 Kia Optima SX Limited (SXL), which is the new top-tier trim level of the ultra-popular midsize Optima sedan line, is now arriving in dealerships with an MSRP under $35,000. First introduced at the 2012 Chicago Auto Show, the upscale Optima Limited went into production at Kia's U.S. manufacturing plant in West Point, Georgia* in early-June and builds on the Optima SX's existing foundation of class-leading horsepower and fuel efficiency while adding a number of exclusive design and feature upgrades, including: 18-inch chrome wheels, red brake calipers, LED lighting and exterior brightwork. Within, the SXL boasts high-grade Nappa leather seating trim, rich wood grain accents and an electronic parking brake, which is exclusive to this trim level.

"With the arrival of the Optima SXL, the Kia brand propels itself into a more premium class, which is something consumers have told us they want to see when they walk into our showrooms," said Tom Loveless, executive vice president of sales, KMA. "This Optima shows buyers that value and upscale character need not be mutually exclusive. For this reason, the SXL stands apart from traditional competitors in the midsize segment."

The SXL trim arrives on the heels of the Optima's record-breaking sales success and exceptional residual value from Automotive Leasing Guide (ALG), the industry benchmark for residual values and a leading provider of data and consulting services to the automotive industry. Contrary to conventional industry residual value trends, the Optima's residual values improved for MY12 and again for MY13 following its launch as a 2011 model. Specifically, the Optima SX trim's notable rating of 57-percent of original manufacturer's suggested retail price (MSRP) for 24 months of ownership is a full 10 points higher than the previous year.

Inside the cabin, high-grade black or white Nappa leather adorns the seats, door panels, center console armrest and center fascia trim for a premium feel. Wood accents can be found on the steering wheel, interior door trim and shift knob, and a black tricot fabric lends a premium feel to the headliner, sun visor, and A, B and C pillars. The Optima SXL also boasts an electronic parking brake, which is offered exclusively on this uplevel trim. A first-aid kit and cloth door weather strip round out the SXL package.

Kia's Unprecedented Growth
Kia Motors is one of the world's fastest moving global automotive brands; from 2009-2011 Kia launched more new vehicles in the U.S. than any other automaker, and under the guidance of chief design officer Peter Schreyer earned a reputation as an industry leader in automotive styling. Kia Motors America's full line of fuel-efficient and fun-to-drive cars and CUVs has earned critical acclaim and dramatically increased consumer awareness, perception and consideration for the brand. In 2011, KMA recorded its 17th consecutive year of market share growth, thanks in part to the largest increase of any major brand in perceived quality9 and the industry's highest brand loyalty ranking10. Kia's U.S.-based manufacturing facility in West Point, Georgia – KMMG – is responsible for the creation of more than 10,000 plant and supplier jobs and builds two of the company's best-selling vehicles in the U.S. – the Sorento CUV and Optima midsize sedan. Kia's value and technology-laden lineup also includes the Sportage compact CUV, Soul urban passenger vehicle, Optima Hybrid, Forte compact sedan, Forte 5-door compact hatchback, Forte Koup two-door coupe, Rio and Rio 5-door sub-compacts and Sedona minivan.

About Kia Motors America
Kia Motors America is the marketing and distribution arm of Kia Motors Corporation based in Seoul, South Korea. KMA offers a complete line of vehicles through more than 755 dealers throughout the United States and serves as the "Official Automotive Partner" of the NBA and LPGA. In 2011, KMA recorded its best-ever annual sales total and became one of the fastest growing car companies in the U.S. Kia is poised to continue its momentum and will continue to build the brand through design innovation, quality, value, advanced safety features and new technologies. 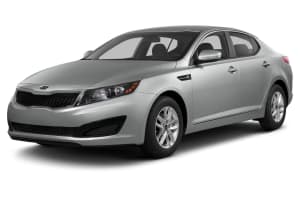