Zach Bowman
The minds at Smart USA took to Twitter to make a point about the manufacturer's tridion safety cell recently. Clayton Hove, who runs a snarky blog about advertising, joked that he "Saw a bird had crapped on a Smart Car. Totaled it," leaving the door wide open for Smart to work up a response. And respond the automaker did.

Smart USA fired off a tweet of its own, complete with an infographic ( click above to enlarge) depicting exactly how much bird excrement it would take to damage the vehicle's safety cell. According to Smart, the structure can withstand up to 9,000 pounds of pressure, which equates to around 4.5 million pigeon droppings.

Smart didn't stop at just doing the math. The company worked up a handy infographic to break down exactly how many turkey or emu droppings would do the same damage. Turns out those numbers are 360,000 and 45,000, respectively. Hilarious. Check out Smart Twitter account to see the original exchange. 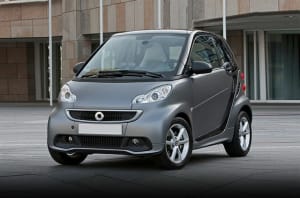