Jonathon Ramsey
It wasn't a joke, but it turns out that when Autoblog discovered the patent filing for a four-door SLS AMG, we stumbled on drawings that were merely part of the development process and not a car intended for production. In February, when we came across the schematic, it was wondered if Mercedes-Benz had another platform utilizing experiment planned – and frankly, based on the sales of the SLS AMG, the idea that such a car was being considered wasn't nearly as outrageous as the look of the four-door car itself.

But AMG chief Ola Källenius has reportedly told Belgian outlet Autovisie "absolutely not" when asked about the possibility or production, and he expressed surprise that the story made such a splash. On the other hand, perhaps the SLS AMG sedan simply needs time to percolate; we're sure that at one time the idea of AMG producing an all-wheel drive subcompact hatchback with 370 horsepower and 300 pound-feet of torque would have been likewise dismissed. 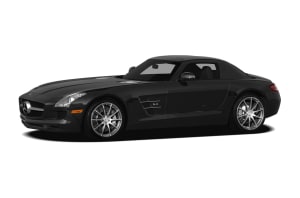