View All Specs
Freshly Tweaked For A Second Life

Ford has not been long known for polarizing design. The company's styling philosophy has read more closely along the lines of "cheap and cheerful." But when it brought out the Flex in 2008 as a 2009 model, Ford started down a road of trying to be more expressive, emotional and evocative in the design of its crossovers and SUVs, not just with the Mustang.

For Ford, the Flex has been one of those hollow victories. The people who buy it love its Mini-Cooper-on-a-high-protein-diet look, especially with the available two-tone paint jobs, and the comfortable packaging and cruising ride they get without bumping up to a frumpy minivan. The trouble is that there haven't been enough of those happy buyers taking the plunge.

Ford sold just 27,000 Flex models last year, down 20 percent from the year before – not exactly one of CEO Alan Mulally's homeruns. Also, its marketing has been confused since its debut. Ford initially pitched it as a cool urban crew wagon – think Funkmaster Flex. The advertising Powerpoint presentation actually said "No dog drool." No kidding. The high-concept ads were all shot at night on city streets. It bombed. Soon after launch, we saw families and even a dog or two in ads.

Ford has refreshed the Flex for 2013, most notably with new front-end and rear-quarter treatments, along with fully updated SYNC and MyFord Touch inside. There are a few other tweaks, none of which feel like difference-makers to us: an updated steering wheel; new seat foams and trim; a thumb rocker to switch between automatic shifting and manual; rain-sensing wipers; new alloy wheel designs and dual chrome exhaust tips.

But let's talk about the front and rear ends first, because they reveal a strategy that leaves we journalists muttering, though most car buyers could probably care less. Ford has removed its iconic, beloved blue oval logo from the vehicle's front fascia. In a move that troublingly reminds us of the strategy General Motors employed in the 1990s when it deleted the Oldsmobile badging from its Aurora sedan because young buyers wouldn't touch something from the brand, the Ford blue oval is reduced to badge jewelry on the rear deck on a token about the size of a silver dollar, as well as on the wheel centers. Across the front and back, in what newspaper editors call "Second Coming Type," is the word "Flex." Or rather," FLEX."

Wethinks Ford is starting to apologize for Ford Blue Oval after several years of pushing "One Ford" and "Drive One." Why? The Ford managers tell us that a full 20 percent of Flex sales are in California, and it's also one of the best brand conquest models Ford has as a percentage of sales. In fact, over 50 percent of Flex buyers are from outside the Ford stable. And the company thinks that it can perhaps up those numbers across the board by recasting the Ford blue oval logo to a walk-on part with one spoken line on the Flex – making Flex more the brand than Ford. Memo to Ford: This idea never works.

What the Flex really has going for it are its looks, versatility and friendly driving demeanor compared to minivans and SUVs that sit higher off the ground. We drove the original Flex when it was first introduced on a 1,600-mile roundtrip between Michigan and South Carolina, with bikes, luggage and one child aboard. We would still be hard-pressed to name a vehicle we like better for such tasks, taking into account comfort, storage, steering and entertainment, so we couldn't help wonder if the 2013 upgrades means a great vehicle has been made even better.

In truth, not much has changed about the formula that helps make the Flex a grand cruiser and one of our favorite alternatives to a minivan. The updated 3.5-liter V6 Ti-VCT engine we've just driven is still everything most buyers will want in a conventional six, offering plenty of get-up-and-go to pull the 4,828 pounds of the all-wheel-drive model we sampled. The 3.5-liter EcoBoost V6 is our top choice, though, with its 355 horsepower and 350 pound-feet of torque, versus the 285-hp – an increase of 25 ponies for 2013 – and 253 lb-ft output of the standard V6. Fuel economy numbers for the front-wheel drive, naturally aspirated V6 ring up at 18 miles per gallon city and 25 highway, and the twin-turbo V6 chips in with a less-than-stellar 16/23. (Fair warning: getting full power out of the EcoBoost requires premium fuel).

Other changes for the 2013 model year include the availability of additional safety features including a radar-based cruise control setup, blind-spot warning system with cross-traffic alert and inflatable rear passenger seatbelts.

Now for 2013's SYNC/MyFord Touch upgrade: There are improvements. Voice command for phone calling is better than in the previous version, and it does a good job of calling up real-time traffic. For those of you with Ford SYNC and MyFord Touch systems already in your driveway, the upgrades are uploaded via a USB drive that is being mailed to owners: the free update includes the new maps, better voice recognition, a simplified interface and a more responsive touchscreen. The graphics are presented in a much more straightforward, uncluttered manner. These are improvements to be sure.

But the bugaboos in the operation of SYNC remain the still-too-distracting voice command operation of MP3 files, especially if using an Apple iPhone, which we were. We found, and had confirmed by Ford, that finding your music and podcasts via voice command on a Bluetooth connection just isn't going to happen. We kept calling out Van Morrison, and it defaulted to Lewis Black. Huh? "Works much better cabled," we were told.

Uh, no. We were still being entertained by comedian Lewis Black. Then, with some advice from Ford, we figured out that even though we had the cable connected, it was still reading Bluetooth. After we reset the system, we got it to behave... sort of. While the phone operations and traffic worked flawlessly, the SYNC voice menu to get us to Al Green (we changed our mind and mood from Van Morrison) was only slightly preferable to getting caught in a Turkish airport with drugs duct-taped to one's chest. As we dove deeper into the voice-command menu, we found we had traveled three miles and hadn't noticed. Conclusion: It was still less distracting to use the improved touchscreen to select Al Green. Transportation Secretary Ray LaHood: Take notice.

Depending on what phone or device you have, SYNC remains a bit like your house's plumbing. Each driver and phone will have some idiosyncrasies to muddle through in the first few days of owning one of these cars with the new system. It might work better with your Blackberry or Android than the iPhone. It may not. If you are a music hound, chances are you are going to want to be cabled in and not use Bluetooth. It's just like having a house where the hot water takes longer to arrive during certain times of the day. You get used to it. But it does appear to us that the system is still not properly organized for voice command to cope with the myriad of band and song names. So, touch away on the screen for that part of the system.

If the Flex has a drawback for family duty, it's that the kids can't crawl between the second row of seats into the third row. You have to fold the second row seats down. For that reason, we think the Flex is an ideal family hauler for two, maybe three, kids. But it is also, or should be, a leading choice for those empty nesters who like the minivans and big crossovers.

Bottom line: As a vehicle, the Flex remains one of those models that its maker did a terrific job of executing. It's comfortable. The ride is much more pleasant than the alternatives (minivans and full-size crossovers). Interior comfort and fit-and-finish is up to snuff. The vehicle's design, while clearly not being for everyone, is fun. We still think the concave lines dug into the doors to mimic the plank lines on old woody wagons are hokey, but not a deal-breaker. This is a terrific, if under-appreciated, crossover-wagon.

With sales as anemic as they are, though, we will be surprised if the company re-ups for Flex 2.0. 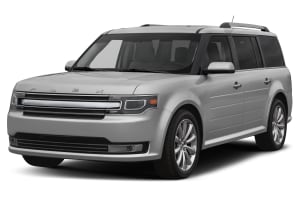