Daimler's Smart minicar division will unveil both a battery-electric version of the Smart Brabus special-edition line and a Smart Brabus electric bike at the Geneva Motor Show this year.
The Smart Brabus electric drive Fortwo will be available in 12 countries by the end of the year. Parent company Daimler notes the model will include touches such as 17-inch alloy wheels, an "electric green" interior. The diminutive runabout will deliver about 80 horsepower, though the German automaker hasn't specified a single-charge range.

Meanwhile, Smart's Brabus ebike will have an electric motor that will deliver 500 watts of power, enough for a top speed of 25 miles per hour. It will also be available at Smart dealers by the end of the year. Smart isn't disclosing pricing on either the Brabus ForTwo EV or the new ebike but you can see both in our gallery.

Last month, Smart said it would start selling a special-edition version called the Sharpred in Europe starting this May. Smart will offer the red and black model in 71- and 84-horsepower versions in both hard-top and convertable configurations, and will make 1,800 Sharpreds.

Stuttgart. For 10 years already smart BRABUS has stood for dynamism and sportiness. Since 2002 the company founded by smart and the tuning specialist BRABUS from Bottrop have brought top versions of the popular car brand to the market. At the Geneva Motor Show the BRABUS versions of the smart fortwo electric drive and the smart ebike will show what these look like in the era of electric mobility. The dynamic character of both models is not only expressed in their appearance, but also in enhanced performance.

"The smart BRABUS electric drive is our sports car with a green heart", says smart boss Dr. Annette Winkler. "Electric driving in the city is more fun than ever with this 2.69 metre short bundle of power.

"The smart BRABUS electric drive will be available from smart centers in 12 countries from the end of this year. In addition to modifications to the exterior and interior styling, its drive has been designed for particularly dynamic and powerful acceleration. Aerodynamic body styling parts, BRABUS sports suspension and BRABUS Monoblock 16/17 inch alloy wheels add to the sporty appeal.

"Like all smart BRABUS vehicles these two new models follow our philosophy of more style, more power and more exclusiveness", says Bodo Buschmann, CEO of the Bottrop customiser BRABUS. "In addition to classic BRABUS customers they also appeal to smart electric drive customers who attach importance to environmental friendliness and also want even more sportiness and exclusiveness. Or to put it another way: we give the sporty soul a green heart."

Zero local emissions but maximum driving fun: the smart BRABUS electric drive proves that cutting-edge urban mobility can be combined with lively agility and a sporty look. The electric motor is based on the state-of-the-art drive technology of the new smart fortwo electric drive and has an output of 60 kW. The smart BRABUS electric drive delivers maximum torque of 135 Nm, which means that it almost always wins when pulling away at the traffic lights. The new BRABUS sports suspension makes a decisive contribution to driving fun by bringing the vehicle approximately ten millimetres closer to the asphalt. The sporty character is accompanied by a special BRABUS sound to match, generated by a sound module. The smart BRABUS electric drive comes with a BRABUS sports steering wheel with steering wheel gearshift as a standard feature. Recuperation can be regulated with the help of the shift paddles.

The smart BRABUS electric drive has a dynamic look that also signals environmental friendliness: the tridion safety cell and door mirror caps are painted in electric green whilst black dominates on all other body parts – even the front grille. Dark BRABUS headlamps, BRABUS "Monoblock VII" alloy wheels measuring 16" at the front and 17" at the rear, and BRABUS Xclusive aerodynamic body styling parts (a front spoiler and a special rear apron insert with double reflectors) round off the sporty look.

Max. speed up to 45 km/h: the smart BRABUS ebike

The smart BRABUS ebike has the features typical of BRABUS - more style, more power and more exclusiveness. It has a dynamic look with the frame and fork in matt black and components such as quick release skewers, pedals and brake callipers in anodised green providing a striking contrast. The saddle and grips come in green leather. A four-piston brake system is fitted on the front wheel. The matt black four-spoke wheels are made of carbon. Further components that distinguish the smart BRABUS ebike from the smart ebike are Sport Contact tyres, weight-optimised cranks and pedals and the carbon seatpost.

With 500 watts the electric motor is twice as powerful as that on the smart ebike. At the same time it was possible to reduce the weight of the ebike by more than ten percent. This makes for agile performance: the two-wheeler that is liable to registration has a top speed of 45 km/h. The rider decides how much assistance to his muscle power he would like from the electric motor with the throttle grip. There is a choice of four power levels with the fourth and highest level providing maximum pushing power.

Sporty smarts are called BRABUS – and have been for ten years already. In 2002 smart and the tuning specialist BRABUS from Bottrop founded a joint company. As early as 2003 the first premium models developed by the joint venture smart BRABUS GmbH - the smart fortwo BRABUS coupé and cabrio - were introduced on the market.

The smart BRABUS tailor made individualisation programme has also been received very well by smart fans. With paint finishes in thousands of different colours, leather in 30 basic colours and exclusive design variants, six cabrio soft top colours and the extensive smart BRABUS accessories portfolio it enables creative customers to configure a smart in line with their own personal ideas. 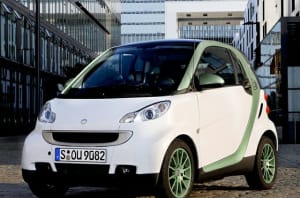