Smart will debut special-edition Sharpred in Europe this May

Danny King
Think if them as the Air Jordans of minicars.

Daimler's Smart division will start selling special-edition versions of its ForTwo in Europe starting in May, as the German automaker looks to jump-start sales of the brand.

The new version, dubbed the Sharpred for its contrasting red-black color scheme (hence the shoe reference) will sold in both hard-top and convertible versions, each having a 71-horsepower and 84-horsepower gas engine option, Daimler said. Daimler will make 1,800 units of the Sharpred, which will also have wider tires and 15-inch wheels. The Sharped will be priced from 14,490 euros (just under $19,000 U.S. at today's exchange rates) for the smaller-engined hard-top to 18,150 euros ($23,700) for the larger-engined convertible.

Daimler, which debuted the Smart as the smallest production car in the U.S. in 2008, is trying to boost Smart sales amid increased competition from models such as the Chevrolet Spark and the Scion iQ. Globally, Daimler sold about 102,000 Smart vehicles last year, marking a 4.6 percent increase from 2010 but which was just 7.5 percent of all Daimler cars sold last year.

Smart recently upgraded the car's look slightly with a bolder emblem, an updated fascia and a new grille, as well as adding a few more options for wheels, though the engines weren't upgraded. The brand, which sells five option packages, will start selling the upgraded ForTwo in the UK in April, followed by the launch of the 2013 model year version in the U.S.
Show full PR text
At dealers from May 2012 - A sharp mix of colours: smart fortwo sharpred
Stuttgart, Feb 09, 2012

The latest edition from smart has been christened sharpred. This smart fortwo is a real eye-catcher as the intense red of the tridion safety cell and door mirror housing forms a striking contrast to the rest of the exterior in black. The smart fortwo sharpred is available as a coupé (from €14,490) and as a cabrio with a 52 kW mhd petrol engine or a 62 kW petrol engine. The exciting special model can be ordered now and the first vehicles of this limited series will reach dealers in May 2012.

The exterior of the smart fortwo edition sharpred is characterised by the striking contrast of elegant black and extravagant red – creating an effect like the red neon sign of an exclusive bar against a black night sky. The bright red paintwork of the tridion safety cell and door mirror housing catch the eye, whilst the rest of the exterior comes in black. The front apron and rear trim panel are grained and the side skirts boast a high-gloss black finish.

The special edition is limited to 1800 vehicles. It is based on the passion equipment line, which means that standard features include softouch automatic gear programme, electric windows, air conditioning with automatic temperature control and a panoramic roof with sunblind. Electric power steering, heated seats, a lockable glove compartment, the smart sound system with five loudspeakers, the smart audio system navigation/multimedia and further equipment are optionally available.

Here is an overview of the prices: 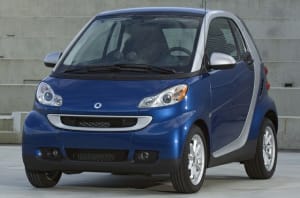