Fiat 500 America not available in its namesake

When a carmaker announces a European-exclusive limited edition, we often feel upset. Sometimes we even get irate. And then there are the instances like this one when we just chuckle and nod.

Not that there's anything exactly wrong with the Fiat 500 "America." We're sure it drives just the same as a regular 500, since, of course, Fiat hasn't changed anything mechanical. It's just that we're not quite sold on the "Old Glory" livery, which doesn't exactly work for the U.S. market. Think about it: Here the car would likely be perceived as a patriotic statement at odds with the car's foreign nameplate.

Overseas, well, we're still not sure why an American-flag bedecked car that looks like it was styled in the aisles of Pep Boys might be desirable, especially given the long-running European sentiment towards us ugly Americans ... but it's fashion, and who are we to argue with the Italians about that? That this is a numbered run of just 1,000 cars (500 two-doors and 500 convertibles) does mean that you won't encounter many others sporting the same side mirror covers, graphics, stickers and color-trimmed alloys or the red seats and contrasting white dashboard inside. Click past the jump for the full press release.
Show full PR text

With the prestigious 5-star EuroNCAP and 40 awards it has won at an international level to date, the Fiat 500 has proven since its launch in July 2007 that it is not merely a city car, but an authentic icon upon which Fiat will build a whole family of cars with innovative technologies and attention to detail worthy of a higher category.

Sold in 110 countries around the globe and with over 800,000 units sold since 2007, the Fiat 500 has set important records in its segment because of its innovation, its "made in Italy" design and its state-of-the-art engine technology embodied by the revolutionary and multi-award-winning TwinAir engine.

The "500 America" numbered edition emphasises the global soul of the Fiat 500 in Geneva, where it is displayed in the saloon version. With only 500 numbered saloon units and 500 numbered convertible units produced, the new Fiat 500 America is celebrating the country where the model was sold in 2011 and where its collaboration with the American pop singer Jennifer Lopez started. The Fiat 500 co-stars with Lopez in her videoclip of the "Papi" track taken from the "Love?" album. An enthralling 30- and 60-second TV commercial was born from this collaboration.

In the Saloon version, the 500 America is offered in the exclusive metallic shade America Blue and it is distinguished by mirror covers with "Stars & Stripes" graphics, stickers, dedicated beltline and 16" alloy rims with red cap edge. American inspiration and iconography are also found in the interiors with red/ivory seats and contrasting white dashboard. The white three-layer paint and "Stars & Stripes" mirror covers are combined with the red top and the graphics in the colours of the American flag in the beltline in the convertible version. In this case the elegant 16" alloy wheels are finished with a blue rim edge.

The 500 America is equipped as standard with manual air conditioning and is enriched with the kit complete with exterior chrome-plating in both saloon and convertible versions.
Lastly, a badge on the pillar bearing the serial number (from 1 to 500) of this ultra-exclusive limited edition makes this car unique. 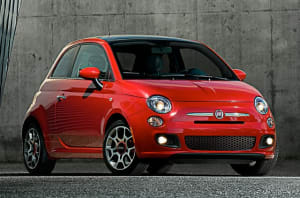