Danny King
While Ford's new Fusion Hybrid is designed to put money back into the pockets of fuel-conscious consumers, some patent attorneys may also be a little more flush as well.

The development of the model, set to debut later this year, helped Ford boost its number of patents related to hybrid powertrain technology to almost 500, reflecting the U.S. automaker's investment in fuel-saving electric-drive technology.

Ford had just 10 hybrid patents in 2000 and about 30 patents two years later. Many of those patented components will be in the Ford Fusion Energi plug-in hybrid-electric, which will debut later this year.

Ford's looking for the Fusion Hybrid to reinvigorate the company's hybrid-electric vehicle sales. Ford's hybrid sales rose just 1.4 percent last year despite the challenges that competitor Toyota had supplying its hybrids to the U.S. because of production issues from parts of tsunami-ravaged Japan, and Toyota's January hybrid sales plunged 35 percent from a year earlier.

The Fusion Hybrid was Ford's best-selling hybrid in the U.S. last year, though the model's 11,286 units sold marked a 6.5 percent drop from a year earlier. Ford unveiled the 2013 Fusion Hybrid at the North American International Auto Show in Detroit last month and said the model may get about 45 miles per gallon combined. That would put the model's fuel economy at about four miles per gallon ahead of the recently re-introduced Toyota Camry Hybrid. 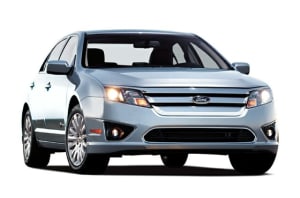