The Soul has been a success for Kia, and a big part of that comes down to style. It's something which the Korean automaker has cultivated with a series of special editions, and this is the brand's latest.

First previewed at the New York Auto Show last year, the Red Rock Special Edition has now been confirmed for production and is available to order. Named after the famous rock formations in the American southwest, it's characterized by a shade of brown exterior paint which Kia calls Canyon, complemented by glossy black trim in the fascia and mirror housings. Inside, the black and brown theme continues, with black leather trim and brown cloth seats.

IRVINE, Calif., Feb. 10, 2012 – Kia Motors America (KMA) announces the seventh version in a series of unique Soul special editions. Inspired by the beautiful rock formations found in the Southwest United States, the Red Rock Special Edition Soul!1 adds style, class and unique features inside and out with a starting price of just $20,600 (2).

"The wildly popular Soul has been a game-changer for Kia since it arrived in 2009, and our series of special editions over the past three years have added individualism and exclusivity to an already fun and youthful vehicle," said Michael Sprague, vice president of marketing and communications, KMA. "Style and flair are key to Soul's success, and the Red Rock Special Edition, which has plenty of both, will help drive sales into 2012."

About the 2012 Soul
Refreshed for the 2012 model year, the Kia Soul has been fine-tuned with a significant number of technological, powertrain and style enhancements. The 2012 Soul delivers class-leading horsepower (3) and significantly improved fuel efficiency of up to 35 miles per gallon (mpg) on the highway (4). Kia Motors' hatchback remains a class-leading value with the lowest starting price of its competitive set at $13,900 MSRP (5). Later this model year, Soul also will be the first among its competitors to offer the fuel-saving ISG technology, which turns off the engine when the vehicle is not in motion, such as at a stop light or in traffic.

Kia's Unprecedented Growth
Kia Motors is the one of the world's fastest moving global automotive brands; from 2009-2011 Kia launched more new vehicles in the U.S. than any other automaker, and under the guidance of chief design officer, Peter Schreyer, earned a reputation as an industry leader in automotive styling. Kia Motors America's full line of fuel-efficient and fun-to-drive cars and CUVs has earned critical acclaim and dramatically increased consumer awareness, perception and consideration for the brand. In 2011, KMA recorded its 17th consecutive year of market share growth, thanks in part to the largest increase of any major brand in perceived quality (6) and the industry's highest brand loyalty ranking (7). Kia's U.S.-based manufacturing facility in West Point, Georgia – KMMG – is responsible for the creation of more than 10,000 plant and supplier jobs and builds the company's two best-selling vehicles in the U.S. – the Sorento CUV and Optima midsize sedan (8). Kia's value and technology-laden 2012 model year lineup also includes the Sportage compact CUV, Soul urban passenger vehicle, Optima Hybrid, Forte compact sedan, Forte 5-door compact hatchback, Forte Koup two-door coupe, all-new Rio and Rio 5-door subcompacts and Sedona minivan.

About Kia Motors America
Kia Motors America is the marketing and distribution arm of Kia Motors Corporation based in
Seoul, South Korea. KMA offers a complete line of vehicles through more than 755 dealers throughout the United States and serves as the "Official Automotive Partner of the NBA." In 2011, KMA recorded its best-ever annual sales total and became one of the fastest growing car companies in the U.S. Kia is poised to continue its momentum and will continue to build the brand through design innovation, quality, value, advanced safety features and new technologies.

Information about Kia Motors America and its full vehicle line-up is available at its website –
www.kia.com. For media information, including photography, visit www.kiamedia.com. 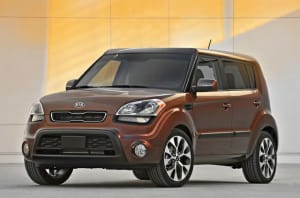