Zach Bowman
A few months ago, we heard word Audi was hard at work on an even sharper version of its TT RS, and as it turns out, those rumors were true. Well, sort of. The German automaker has unveiled the Audi TT RS 'plus' in the EU, though the vehicle produces the same 360 horsepower as the fire-breather we sampled last year. The 0-60 mph dash takes the same 4.1 seconds, though buyers in the old country will have the option of outfitting their purchase with a seven-speed dual-clutch S-tronic gearbox. Likewise, the TT RS plus is available in both hardtop and convertible configurations, whereas buyers in the U.S. can only have theirs as a fixed-roof coupe with a manual gearbox.

Interestingly enough, Audi lists the vehicle's curb weight at 3,196.7 pounds, which is just over 100 pounds lighter than what the company quoted us for the U.S.-spec model back in October. Given the weight reduction, we would expect slightly improved performance over the American TT RS, but the 0-60 mph figures are nearly identical.

It wasn't long after we drove the TT RS that whispers of an even brawnier TT RS 'plus' surfaced. The vehicle was rumored to have 385 horsepower and weigh in at 130 pounds less than the standard model. You know what they say: One out of two ain't bad... or something. Hit the jump for the press release.
Show full PR text
Even more dynamic: the Audi TT RS plus

Even more powerful, even faster, even more dynamic: Early 2012 will see the launch of the Audi TT RS plus. This compact sports car, in both Coupé and Roadster versions, stands out for its awe-inspiring performance. Its power-boosted five-cylinder turbo delivers 265 kW (360 hp), sufficient for a top speed of 280 km/h (173.98 mph).

The 2.5-liter TFSI in the Audi TT RS plus is a high-performance engine. Compared with the engine on which it is based, this turbocharged direct-injection unit delivers 15 kW (20 hp) more power. It produces 465 Nm (342.97 lb-ft) of torque, 15 Nm (11.06 lb-ft) more than before. Customers can choose between a manual six-speed transmission and the seven-speed S tronic with its lightning-fast gearshifts. The dual-clutch transmission comes with a launch control function which optimizes acceleration from a standing start. The quattro permanent all-wheel drive system, which operates with a multi-plate clutch, transfers engine power to the road in supreme style.

The TT RS plus unites dynamics and efficiency in a most impressive way. Against the backdrop of the five-cylinder engine's characteristic roaring and growling, the Coupé with S tronic catapults from a standstill to 100 km/h (62.14 mph) in 4.1 seconds (with manual transmission: 4.3 seconds). The Roadster completes the same exercise in 4.2 seconds (with manual transmission: 4.4 seconds). Top speed is limited to 280 km/h (173.98 mph) for all versions of the car. The Coupé with S tronic uses an average of just 8.5 liters of fuel per 100 km (27.67 US mpg); the Roadster uses 8.6 liters per 100 km (27.35 US mpg).

Alongside numerous efficiency-improving measures, these top figures are due primarily to the extremely lightweight Audi Space Frame (ASF) bodies made of aluminum at the front and sheet steel at the rear. The Coupé with manual transmission, including quattro drive, weighs just 1,450 kilograms (3,196.70 lb); its power-to-weight ratio is 4.0 kilograms (8.82 lb) per horsepower. The power-to-weight ratio of the Roadster is 4.2 kilograms (9.26 lb) per horsepower.

The high-performance brake system is able to cope with the engine's power at all times. Four-piston fixed calipers in conjunction with perforated brake disks are installed on the front axle. The Audi TT RS plus is fitted with 19-inch cast wheels of five-arm "Rotor" design; they are painted black with contrasting red rim flanges. The wheels are fitted with 255/35 tires. The adaptive damping system known as Audi magnetic ride is available as an option. A large, fixed rear wing increases downforce at the back of the car.

The Singleframe radiator grille also sets the Audi TT RS plus apart visually: Its diamond-pattern mesh is in highly polished anthracite, its trim frame has a matt aluminum-look finish. The housings of the exterior mirrors are made of carbon fiber-reinforced polymer (CFRP). The dual-branch sport exhaust system has black oval tailpipe trims. A sound flap further intensifies the sound of the engine. The Carbon design package gives the engine compartment a more exclusive look. The knob on the gear or selector lever features an aluminum-look trim ring and a TT RS plus badge. 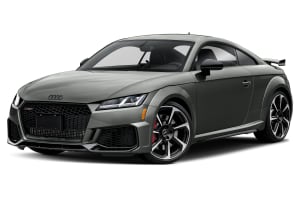 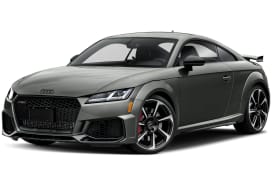 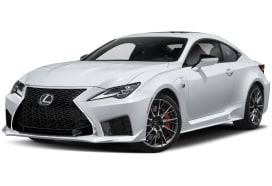