Which Spyder is the fastest? EVO finds out [UPDATE]

Zach Bowman
At first glance, pitting the Porsche Boxster Spyder against the Audi R8 Spyder is a bit like throwing a trout in a five-gallon bucket with a piranha. After all, the big Audi boasts over 100 horsepower more than the baby Porsche. Throw in the fact that the R8 puts its power to the ground through all four wheels while the Boxster Spyder is left to manage with just two, and the fight looks even more bleak for Stuttgart's finest. Still, the Audi R8 Spyder isn't a lightweight by any stretch of the imagination. The vehicle needs all 430 horsepower from its 4.2-liter V8 to move the sports car's 3,858 pounds around the track.

The Porsche Boxster Spyder, meanwhile, weighs in at over 1,000 pounds lighter. That 100 horsepower gap doesn't seem so big now, does it? EVO Magazine recently took the time to put the two vehicles to the test and worked up a quick video of their exploits. Who came out on top? You'll just have to hit the jump to find out for yourself.

UPDATE: EVO's embed code is busted, so click through to watch the video. 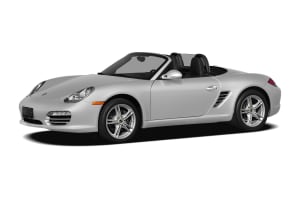