Flashback to 1989, and you'll recall the Mazda debuted the very first Miata under the lights of the Chicago Auto Show. Because of that, Mazda has had a tendency to debut many a special edition Miata at the Chicago expo, and this year will be no different.

Limited to just 450 units here in the Untied States, the 2012 Mazda MX-5 Special Edition takes the top-trim Grand Touring model a step further with a new black-only power retractable hard top – the first time a non-body colored hard top has been available – as well as new 17-inch gunmetal wheels, black exterior accents, black heated leather seats and piano black interior trim. Two new exterior colors – a special white and red – will be offered, and the car can be had with either the six-speed manual or six-speed automatic transmission.

Mazda makes no mention of powertrain upgrades for the MX-5 Special Edition, but the normally optional Premium and Suspension packages will come as standard equipment. This means buyers will be treated to goods like Bluetooth, Sirius satellite radio, Bilstein shocks and a sport-tuned suspension. Pricing and detailed specs will be released as part of next week's Chicago festivities, but for now, follow the jump for Mazda's initial press release.
Show full PR text
2012 MAZDA MX-5 MIATA SPECIAL EDITION MAKES NORTH AMERICAN DEBUT IN CHICAGO

The MX-5 Miata is the world's best-selling two-seat roadster with more than 900,000 produced, and made its global debut at the Chicago Auto Show in 1989. The MX-5 Special Edition continues the sports car's history of being a dynamically-engineered, enthusiast-approved roadster whose price doesn't discriminate and whose luxuries are not stripped.

Available with either the six-speed manual transmission with short-throw shifter or six-speed Sport automatic transmission with steering-wheel-mounted paddle shifters, the Special Edition model is based off the Grand Touring model. Both Premium and Suspension packages will be standard on the MX-5 Special Edition and include features such as a Bluetooth® hands-free phone system, SIRIUS® Satellite Radio, Bilstein shocks and a sport-tuned suspension.

Also on display at the 2012 Chicago Auto Show will be:

• Turbo2 – Unveiled at the SEMA Show held in Las Vegas this past November, this concept is the brainchild of The Autobarn, which owns two Mazda dealerships in the Greater Chicago area. Here, a "Zoom-Zoom Concentrated" Mazda2 is outfitted with an extra-strength component in the form of a MAZDASPEED3 MZR 2.3-liter Direct Injection Spark Ignition (DISI) turbo engine. Consider the Turbo2 a subcompact cat that doesn't purr – it growls. 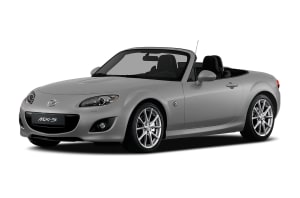