Steven J. Ewing
She may be Jenny From The Block, but when it came time to pay homage to her 'hood in a recent Fiat 500C ad, sources say that Jennifer Lopez never actually traveled to New York for the shoot. According to folks familiar with J.Lo and Fiat's "My World" commercial production, a body-double was used for the scenes showing the car driving through Lopez' hometown of the Bronx.

The Smoking Gun reports that Lopez' scenes were actually filmed in Los Angeles, and Big Block, an LA-based digital production studio, was brought in to make it appear as though J.Lo was actually driving through her hometown. Lopez was born in the Bronx in 1969 and in the ad, states, "This is my world. This place inspires me."

Local business people shown in the ad, including barber shop owner Eligio Cueto, confirmed "it wasn't her." TSG reports that as the Fiat and the commercial camera crew drove by his storefront, he noticed that "a double that looked like her" was behind the wheel. Shooting in one city and making it look like another is nothing new – it's done all the time in movies, television shows, and all manner of videos. But given how the commercial is written in such a personalized manner, and given how much of lightning rod the campaign has been within the advertising and marketing community, this latest development isn't likely to win the campaign any more respect.

To viewers of the commercial unfamiliar with The Smoking Gun, the whole thing seems pretty well-masked, but follow the jump and watch the ad for yourself to draw your own conclusions. 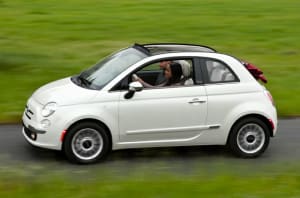