The auto show transition seemed to happen in a flash. One year, automakers were jockeying for dealer traffic with high horsepower, rear-wheel-drive retro rides, and the next year, each one of them ushered in a hybrid or electric vehicle. The paradigm shift was a welcome sight for car buyers wanting to shrink their carbon footprint and save money on fuel, but the majority of those products were years from production. Fast-forward to 2011, and the variety of fuel efficient transportation on offer in the industry has improved quite a bit, including this sleekly styled mid-size offering from Hyundai.

The Sonata Hybrid may have taken longer than expected to hit the market, but its lithium-polymer battery pack and host of fuel-saving features have given Hyundai 35 miles per gallon city and 40 mpg highway fuel economy numbers to flash before consumers. And the Sonata Hybrid isn't battling the competition on fuel economy alone. It also features attractive styling that sharply differentiates it from non-hybrid Sonata models, while also carrying an MSRP thousands of dollars less than the Toyota Camry Hybrid and Ford Fusion Hybrid.

We spent a week with a modestly equipped Sonata Hybrid, but rather than going light on the pedal to gather up as many Eco points as possible, we drove it like we would any mid-sized sedan to see if it could hang with the daily drudgery of suburban life.
Our Hyper Silver Metallic tester carried a very reasonable price tag of $25,930 (plus $720 shipping), and Hyundai kept that MSRP low by adding only floor mats ($100) and an iPod cable ($35) to the options list. Fortunately, the Sonata Hybrid already comes equipped with a boatload of standard features, including a six-speaker sound system with USB and auxiliary inputs, Bluetooth hands-free connectivity, automatic climate control, headlights with LED accents and a 4.2-inch LCD trip computer/hybrid technology display.

"Hybrid" and "low MSRP" generally don't go hand-in-hand, but the $25,795 base price of the Sonata only strengthens its case. This Hyundai also proves that hybrids don't have to be stodgy pods to achieve mpg bliss. The same Fluidic Design that's been a hit with the Sonata Hybrid's gas-only sibling looks just as good with a 30-kilowatt electric motor under the hood. And Hyundai hasn't simply slap on some Blue Motion badging to differentiate its hybrid offering from the hot-selling standard Sonata.

The biggest adjustment comes in the form of a gaping grille that looks like a whale shark on a plankton feeding frenzy. Further aero improvements come in the form of tweaked bodyside moldings and a more sharply truncated rear end with unique 'atom' element taillamps. In total, exterior engineering adjustments result in a drag coefficient that drops from .28 to an outstanding .25, the same number achieved by the benchmark Toyota Prius.

We dig the fact that the Sonata Hybrid looks quite a bit different than its sibling, and the Bill Nye taillights are something to behold. Heck, even the Blue Motion badging looks cool. For our money, there is one hybrid-only touch that just has to go: the standard 16-inch alloys. We're not sure what Hyundai's designers were going for here (at least beyond aero supremacy), but they ended up with a set of wheels that draws Blade-Runner-meets-Salad-Shooter comparisons. Luckily, Hyundai offers optional 17-inch wheels that look remarkably classier than the ones seen here. Unfortunately, the upsized wheels can only be had as part of the Premium Package, which will set buyers back another $5,000.

Nasty wheels aside, the Sonata Hybrid is a looker, and the interior isn't hard on the eyes, either. Hyundai has decided to carry over the same interior from the standard Sonata, save for some Blue Drive badging and the aforementioned 4.2-inch display. That means hybrid buyers get the same spacious cabin flush with attractive curves and soft-touch materials on the dash, doors and center console. Seats are comfortable and appropriately bolstered as well, and the driver's seat is power-adjustable. Another big plus comes in the form of a standard USB port and Bluetooth connectivity that quickly and easily syncs to a Bluetooth-enabled phone. And the 4.2-inch LED screen? It's bright, with easy-to-read graphics and various ways to dissect your driving habits. The Eco bars aren't nearly as interesting as the fanciful tree leaves adorning the display of the Lincoln MKZ Hybrid, but a driver's eyes should be focused on the road anyway.

The Sonata Hybrid's interior scores big with overall refinement and standard tech, but we observed a few chinks in its armor. The biggest issues are the rubbery steering wheel and shift knob, which makes an otherwise impressive cabin feel like a trip to the Walmart clearance rack. Adding leather to these items the driver touches most again requires the $5,000 Premium Package. Sure, the Ford Fusion Hybrid starts at $28,600 ($2,670 more than the Sonata), but it at least comes standard with a leather steering wheel and shift knob, plus a bunch of standard features that can only be had with Hyundai's Premium package.

The Sonata Hybrid is powered by a 2.4-liter four-cylinder engine with 166 horsepower at 6,000 RPM and 154 pound-feet of torque at 4,250 revs. Like other hybrids on the market, the Sonata Hybrid's 2.4-liter engine runs on the more efficient Atkinson cycle, which closes the intake valve late to provide a shorter compression stroke than traditional Otto cycle engines. But unlike many other hybrids that use an electric continuously variable transmission, Hyundai has opted to mate its powertrain to a more conventional six-speed automatic transmission. You'll hear no arguments here, as the transmission did its job well with a smooth operation and reassuring gear selections during our test.

Additionally, Hyundai didn't go with the cheaper, yet tried-and-tested nickel-metal hydride battery pack. Its engineers decided to start with a clean slate, diving feet-first into newer lithium polymer cells for power storage. The end game is a 1.4 kilowatt-hour battery pack that weighs only 96 pounds. The Blue Drive's electric motor isn't as powerful as those found under the hood of the 2012 Camry Hybrid (141 hp) and Fusion Hybrid (106 hp), but the 30 kilowatt motor still manages to generate 40 horsepower and 151 pound-feet of torque. Combined horsepower figures are 206 hp for the Sonata Hybrid, 200 hp for the Camry Hybrid and 191 for the Fusion Hybrid.

Numbers and specs can be fun, but real-world driving is where the Hankook Optimo rubber meets the road. And while the Sonata Hybrid's driving dynamics aren't particularly aggressive, this Sonata's hybrid system is. If you take your foot off the gas at most any speed, the engine turns off in a pinch and the regenerative braking system begins to charge the lithium battery. When the go pedal is handled with care and the speed kept under 70 mph, the electric motor and battery can move the car by themselves, thanks in part to an engine clutch that manages the gas engine and electric motor separately. Even better, the throttle doesn't have to be babied like many other hybrids do, giving the driver more time to enjoy gas-free motoring.

In the past, we'd practice a great deal of restraint when driving a hybrid, because trying to achieve the best possible fuel economy can actually be fun. But for us, the novelty of driving a hybrid in this way goes away after a week – just when the fuel economy game starts to become a bore. For that reason, we took pains to experience the Sonata Hybrid as we would any other mid-size sedan.

As a regular four-door, the Sonata Hybrid is plenty easy to live with. Power is strong off the line when needed, and the integrated starter generator goes about the job of switching the engine on and off without any major drama. The system isn't as smooth as the one under the hood of the Fusion Hybrid, but the tradeoff is that the Blue Drive system appears to be more aggressive when cutting off the power whenever it isn't needed.

The EPA tells us that Sonata Hybrid owners can expect fuel economy numbers of 40 mpg highway and 35 mpg in the city. Our experience with the hybrid Hyundai wasn't quite in the range of those numbers, as we managed 33.5 mpg in mixed driving, which falls below the EPA combined rating of 37 mpg. We weren't all that impressed with those results, and we're thinking that most diesel-powered mid-size entries would eclipse a combined score of 33.5 mpg. In fact, our Jetta TDI long-term fleet vehicle routinely averages more than 40 mpg. And although the Fusion Hybrid costs a bit more and relies on older nickel-metal tech, it still delivers better fuel economy numbers of 41 mpg city and 36 mpg highway. The new 2012 Camry Hybrid promises even better fuel economy, with an estimated 39 mpg highway and 43 mpg city. Just as troubling, in our experience, the standard 2.4-liter gas-only Sonata actually tends to return fuel economy figures above its 24/35 EPA numbers, particularly on the highway, so we have to wonder if the standard Sonata isn't the better overall bet when it comes to return-on-investment.

While we were less than impressed with the Sonata Hybrid's fuel thrift, we were pleased with its overall driving dynamics. At 3,578 pounds, the Sonata Hybrid is still light on its feet, with a structurally rigid chassis that doesn't flex at the slightest change of direction. Power delivery is smooth and predictable, with an estimated 0-60 mph time of about nine seconds. The steering is predictably free of hydraulics, yet Hyundai has chosen to dial in a bit more artificial heft than we expected or really want.

The Sonata Hybrid Blue Drive is a solid first foray into the world of mixed propulsion motoring for Hyundai. Would we have liked to see better fuel economy numbers? Absolutely. But there is still something to be said about a hybrid that can deliver good looks, solid fuel economy and a driving experience that isn't fun-free. Not every vehicle in this segment can make such a claim, and none can come within $1,000 of this Hyundai's $25,750 price of entry... at least until the 2012 Camry Hybrid goes on sale starting at $25,900. 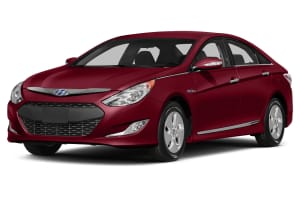