Despite enchanting few critics along the way, the all-new 2011 BMW X3 has been helping its German parent clean up on the sales charts.

Like the rest of the premium crossover segment, the X3 has been viewed by some brand diehards as a blatant cash-grab. The starting price might be easy enough to swallow, but start ticking the option boxes and the sticker swells to a size more startling than the first time you heard your mother drop an F-bomb. Despite this, we wanted to see if the 2011 BMW X3 xDrive28i could break through the enthusiast's wall of prejudice. As you'd expect, it's a mixed bag.
The 2011 BMW X3 is roughly the same size as the original X5. The 110.6-inch wheelbase is essentially unchanged, but there's now three more inches of overall length for an even 183 inches from tip-to-tail. The styling uses that new room to stretch, and the dynamically straked profile makes the increase look like at least double that.

Clamping the stubby, original X3 in a taffy pull and giving it a yank leaves the 2011 X3 looking both familiar and like a part of the modern BMW family. The carefully detailed bodywork plays up its conservative image to good effect. The Bangelized original lines have been matured without radical changes.

BMW has also brought the interior of the 2011 BMW X3 up to par with the rest of the range. Like the exterior changes, BMW hasn't gone and reinvented the steering wheel, so the design of the dashboard and door panels does little more than look and feel like a current BMW interior. Materials and fit-and-finish are improvements, though the shifter and spring-loaded blinker stalk are still annoying to use for some. The clean design isn't avant-garde, but it means clear ergonomics, and the eight-way power front seats are fantastically comfortable. Rear seat passengers get a newly liveable area, benefiting the most from the size increase. The latest implementation of iDrive is finely tuned and the standard LCD has crisp graphics, but pales in comparison to the optional 8.8-inch display that's the automotive equivalent of an ostentatious plasma screen.

A benefit of the continued refinement of iDrive is an uncluttered center stack. Our tester was bereft of navigation and the larger screen, so its limited iDrive feature set was particularly easy to navigate. Analog gauges are clear, there are real cupholders and the Sand Beige leather and warm-toned Fineline Sienna wood trim created an inviting atmosphere, especially when paired with the big, airy panoramic moonroof – worth every bit of its $1,350 price tag. Visibility in all directions is not hindered by gigantic pillars and the elevated crossover seating position makes for confidence-bolstering sightlines, too.

The naturally aspirated inline six-cylinder engine in the X3 xDrive28i is one of the most celebrated engines in the BMW family, even if it is facing internal competition from BMW's new twin-turbocharged 2.0-liter four. Engineering skill is shown off with a composite block of magnesium alloy for light weight, a valvetrain twiddled by Valvetronic and Double VANOS systems that do away with a throttle plate, and other slick, efficiency-boosting technology like Brake-Energy Regeneration. All the whiz-bang results in 240 horsepower and 221 pound-feet of torque from 3.0 liters, but the issue at hand is how this engine and its attendant eight-speed automatic transmission behave out on the road.

Peak torque plateaus between 2,750 and 4,000 RPM, and the eight-speed transmission does its best to keep the engine in the lip-smackingest meat of the powerband, but not even BMW can overcome the fact that the X3 weighs 4,100 pounds. That's about the same as the original X3, so kudos for keeping weight in check, but it's a heavy load for the available torque to cope with, wide powerband and cornucopia of gear ratios aside.

Most annoyingly, throttle tip-in is noticeably sluggish. More than once after nosing the X3 out to snag a gap in quick traffic, we found ourselves with an indecisive vehicle and angry oncomings. The throttle doesn't just choke during clutch plays, either – the initial deadness was constantly infuriating. The situation is compounded by the whims of the eight-speed gearbox, which tries to cycle through its cogs too often. We've experienced this same ZF transmission in many other cars – indeed, in many other BMWs – and we don't recall it being so indecisive.

The X3 has gained access to the BMW bag of technowizard tricks through its redesign, and there may be some alchemy in there to improve responsiveness. Dynamic Damping Control adds buttons to the center console that give you the choice of Normal, Sport or Sport + modes. Selecting one of the sport options makes the throttle response more immediate, stiffens the suspension and adjusts the transmission shift points. Variable-ratio steering is another enhancement our X3 didn't have. The standard electromechanical power steering system strives for both efficiency and feel and just achieves the former. By doing its best to avoid using any boost to reduce engine drag, the system unfortunately erases most of the feedback for the driver, too.

But out-and-out driving enthusiasts aren't who the X3 has been created for, even though the XDrive all-wheel-drive system defaults to a rear-drive bias and the available Dynamic Handling Package includes Performance Control, which keeps the torque split rear-drive oriented. This is a vehicle made to appeal to buyers looking for technology, cachet and premium detailing. With that in mind, the details have been sweated, going so far as to include little treats like lighting in the door handles. The interior has an array of storage cubbies and there's a cargo-rail system in back, too. Think of the 2011 BMW X3 as a 3-Series wagon for the non-wagon buyer and you'll have it right. The X3 cedes territory dynamically to be a Sport Activity Vehicle – BMW-ese for "crossover" – but that doesn't seem to bother buyers.

That's good, because the price can scorch. Our test X3 hit the checkout line with a $45,725 price tag with plenty of room to go if you want to drop bigger cash on a smallish vehicle. The model's $36,750 base price is lower than the outgoing 2010 X3 xDrive30i, last year's only model, but it swelled by adding the $3,450 Premium Package, Cold Weather Package for $1,150, and Sport Activity Package for another $1,550. We were enamored with the head-up display that added another $1,300 to the bottom line, but start throwing in the other available goodies like the M Sport, Dynamic Handling and Technology Packages, and you're well into X5 xDrive30i territory. As it is, our little X3 wasn't far from the $47,000-and-change base price of an X5.

Despite its driveline foibles, the 2011 BMW X3 feels like it belongs in the current family of BMW products, and it has the styling and available equipment to attract buyers' attention. The Audi Q5 puts up a particularly good fight to the newfound charms in the X3, and, to a lesser degree, so does a Mercedes-Benz GLK. There are lots of options for your thousands of dollars, but at least now there's a proper modern BMW available in this class. 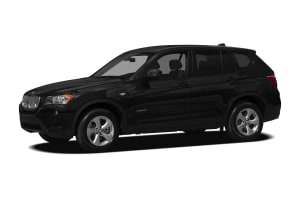