Our 2011 Hyundai Equus long-termer continues to pile on the miles in the effortless fashion that one expects of a premium sedan. August's main outing was a weeklong stint in the Outer Banks of North Carolina, about 800 miles from Detroit. All-in, the trip accounted for over 2,000 miles, during which the Equus stretched its legs as a capable freeway cruiser and even was pressed into undignified service as a surfboard transport (see above). In case you're wondering, no, an eight-foot rental longboard won't fit in a luxury sedan (not in this or any other we can think of), so you'll be forced to do the shish-ka-windows-and-empty-side-road-creep with the hazard lights on if you don't have any alternatives.

With the exception of a modest bit of track time at Hyundai's Seoul proving grounds in a few prototypes, this was your author's first experience with the Equus. As one might expect, it acquits itself better over-the-road than on the track, delivering a comfortable ride and plush confines in which to while away the miles.

What was surprising for this driver was how much attention our Equus garnered – it's rather innocuously styled, after all. But we hadn't been driving further than our first rest stop when a couple of attractive twenty-something ladies stopped to ask about our car as we got out in the parking lot. "What is it?!" they gushed. "Believe it or not, it's a Hyundai," we answered. Puzzled looks. "Wait... really? Well... it's still really nice, though!" We laughed a little inside and moved on, but their reaction was telling – "It's still really nice, though!" is both a credit to what a pleasant surprise the Equus is for Hyundai, as well as a subtly backhanded ding at the company's "off the radar" standing among many consumers. The same rest area yielded a discussion with a very enthusiastic Genesis sedan owner, and subsequent conversations were held at stoplights with frantic arm-waving Toyota Avalon drivers and more random people in parking lots, including a BMW E60 5 Series owner fed up with his ownership experience. We have to admit, we viewed the Equus as something of a generic knockoff design-wise, but our conversations suggest that the general buying public doesn't feel the same way (or doesn't care).

We do have some nits to pick with our big white whale, however. Others have mentioned this, but it's worth pointing out again – the adjustable lumbar support seems to be in perpetual state of overinflation. No matter how much we tinker with the air bladder controls, it just feels too prominent on our lower backs. It's so uncomfortable that it's led to both your author and Editor-In-Chief Neff to ponder drastic, pin-shaped countermeasures. We wouldn't, of course, but it's still bothersome. The best solution for long-distance comfort seems to be extending the bottom cushion a bit longer than we normally might, as this somehow alleviates the stress.

Otherwise, the interior offers plenty of amenities and creature comforts, though the controls, finishes and design aesthetic lack the same sort of aura of refinement as rivals. Overall, our Equus Ultimate succeeds at feeling like a great value, but stops short of feeling like a great full-size luxury sedan. That's partially due to the interior and partially due to the 4.6-liter Tau V8. Its 385 horsepower and 333 pound-feet of torque certainly aren't anything to sneeze at, but this is 4,600-pound mass of Korean real estate, and it simply feels adequate. Other media outlets have tested the Equus and found 0-60 times in the mid-to-high six-second range, so it's certainly not slow, but the ECU and transmission tuning makes both off-the-line acceleration and highway passing feel more leisurely than we'd expect. More chutzpah isn't far off, thankfully – the 2012 model is widely expected to adopt the 5.0-liter V8 and eight-speed automatic gearbox recently introduced in the updated Genesis sedan.

Despite sustained higher speeds, traversing Pennsylvania's Alleghany mountains, negotiating a dead-stop traffic jam and a lot of pottering along in beach traffic, we averaged a solid 21 miles per gallon, smack in the middle of the 18/22 city/highway mix the EPA predicts. During that stint, we saw sustained freeway running with indicated mpgs in the mid-to-upper 20s without even trying, suggesting that it's likely quite easy to beat the Equus' official fuel economy estimates if you take it easier than we did.

A Word On Servicing
by Steven J. Ewing

Unlike our first encounter with the Equus At Your Service valet program, our most recent experience went off without any issue. We made the appointment with the Equus Apple iPad app, received a confirmation call and e-mail from the selected dealer (Glassman Hyundai in Southfield, Michigan), followed by another call the day before the service to confirm the time and what our loaner vehicle would be. The day of our service, the dealership kindly called to say that a representative was on the way, and about 15 minutes later, a service technician arrived and handed over the keys to a clean, detailed 2011 Hyundai Genesis sedan. A few hours later, the dealer called again, saying our car was ready, and that the vehicles would be swapped once more. Before returning the Equus to us, Glassman washed and vacuumed it. If this is the sort of service we (and other Equus buyers) can routinely expect, it goes a long way in bettering the overall ownership experience. –Steven J. Ewing 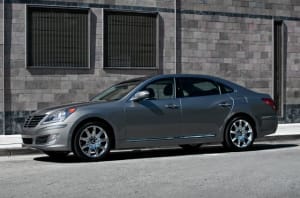