Audi has worked up a special edition version of the company's R8 to commemorate the German automaker's victories at Le Mans. Powered by the same 430 horsepower, 4.2-liter V8 found in the base coupe, the R8 V8 Limited Edition models are available with special titanium-effect paint with titanium-toned wheels to match. Those rollers are 19-inch double Y-spoke bits that were crafted in the spitting image of the hardware found on the R8 GT Coupe. Buyers can also expect to find a set of red brake calipers tucked behind the wheels. All of the company's standard metallic and pearl effect paint options will also be available on the commemorative cars.

Inside, the R8 V8 Limited Edition comes with satellite navigation and Audi Music Interface with a Bang and Olufsen sound system as well as a unique interior lighting package and Bluetooth hands-free calling. Prices start at £93,935 in the UK. That figure translates to around $150,000 (including Britain's costly Value Added Tax), though there's no clear indication as to whether or not any of the 100 examples will make their way to the States or how much Audi will ask U.S. buyers to pay. Hit the jump for the press release.
Show full PR text
Distinctive design features and a high level of standard equipment for new limited run version of acclaimed 430PS, 187mph sports car

R8 V8 Limited Edition available to order from July in coupe form only and with either manual or R tronic automated manual transmission priced from £93,935 OTR - first UK deliveries in October

Marked out externally by R8 GT-inspired titanium-look alloy wheels and red brake callipers, and inside by trim detailing in crimson red

A stunning new titanium-effect paintwork option and enhanced standard equipment will mark out the new R8 V8 Limited Edition, which becomes available to order next month priced from £93,935 OTR. Created in honour of the tenth victory for Audi in this month's gruelling 24 Hours of Le Mans marathon race, which was won first in 2000 by the R8 sports prototype, the new feature-rich special edition road car is based on the hugely successful R8 V8 Coupe. It will be reserved solely for UK R8 customers, and with just 100 examples currently scheduled for production it will offer even greater exclusivity.

Titanium finish 19-inch '5-arm double-spoke Y design' alloy wheels inspired by the R8 GT Coupe, and embellished by red brake callipers, will be the key differentiating feature of the exterior of the R8 Limited Edition in its standard form. All normally optional metallic and pearl effect paint options will also be included in the Limited Edition price, but for maximum visual drama customers will be able to specify a striking Titanium Metallic paint finish, which will be exclusive to this model, at extra cost.

Over and above the standard R8 V8 Coupe specification, the Limited Edition model includes satellite navigation, the Audi Music Interface (AMI), an interior light package and a premium Bang and Olufsen sound system, as well as mobile phone preparation via a Bluetooth interface with integrated seat-belt microphones.

The much praised Audi magnetic ride adaptive suspension system also makes a special appearance as standard equipment in the Limited Edition. Using sensors to monitor road conditions, it adjusts the damping effect to suit them by varying a magnetic charge which passes through a fluid-based shock absorber. Mated to the ultra-lightweight aluminium and magnesium Audi Space Frame (ASF) and the advanced suspension bolstered by quattro permanent all-wheel-drive technology, the system creates the optimum conditions in which the mid-mounted 430PS V8 FSI engine can give its very best.

As it revs freely to its 8,250rpm limit, the directly injected 4.2-litre engine dispenses with the zero to 62mph sprint in 4.6 seconds in both manual and R tronic automated manual versions of the R8 V8 Limited Edition. Autobahn-permitting, it can then power on to a 187mph top speed.

On the inside, the Limited Edition is marked out by crimson red accents to the sides of its Black Fine Nappa Leather-upholstered seats and headrests, which also feature red contrast stitching. The design theme is continued with red stitching on the flat bottomed, leather-covered multi-function steering wheel and instrument cowl and by a striking crimson red leather finish for the monoposto. To complete the look, the knee pads and passenger door handle are also finished in red leather, and the floor mats have a red surround and feature the R8 logo in silver. The sporting character is further underlined by stainless steel pedals and illuminated door sills with bright aluminium inserts carrying the R8 logo.

For even greater visual distinction, the R8 V8 Limited Edition is also available with an optional Carbon Package, which adds carbon sigma sideblades, door mirrors, monoposto, inlays and door sill trims. Perhaps most impressively, the racing-inspired material also frames the illuminated engine bay, giving even greater prominence to the potent V8 that is clearly visible through the rear window.

In common with all R8 models, the R8 Limited Edition also includes one special standard feature that isn't so immediately apparent – a bespoke R8 Driving Experience at Silverstone Circuit which will enable owners to fully acquaint themselves with the dynamic characteristics of the R8 in controlled conditions. 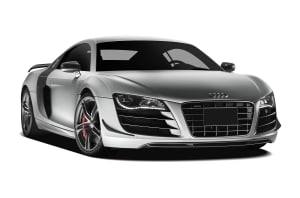