Paul One and Paul Two each took a shot at marrying Cadillac's edgy and modern Art and Science design philosophy for a recent series of episodes from the long-running American Chopper television program. While it's generally accepted by motorcycle fans that the show is really all about the drama and hysterics of the extremely dysfunctional Teutul family, the automotive connection in this build piqued our auto-obsessive interest enough to check in with the custom bike creating family.

In case you're behind in your American Chopper history, the Senior and Junior Pauls are no longer working together at Orange County Choppers. Paul Jr. is running his own shop and design firm (the imaginatively named Paul Junior Designs) and has been pitted against his own father in the last few seasons of the hit reality television show. So, as you might have figured, the father and son each designed and built (with the help of their respective crews, of course) their own takes on the Cadillac CTS-V.

Both builders went long and low with an emphasis on looking fast, and both painted their machines metallic black with plenty of chrome accents. But the details of each bike are unique, with the elder Teutul pushing the power angle with a monstrous V-twin engine and an extra shot of ponies courtesy of a hidden shot of nitrous. Paul the Younger differed in his approach by injecting as much of the actual CTS-V into his two-wheeled machine as possible.

Push come to shove, we think Junior's design more accurately depicts the Cadillac design theme. In any case, neither motorcycle would be all that useful as actual transportation devices, and neither is likely to be ridden more than a few feet in any direction for loading, unloading and general "See, it does work!" showing off.

In any real competition, there must be a winner and a loser. Discovery Channel, Cadillac and the two Teutuls have teamed up to pit these two motorcycles up against one another to raise money for the Cure Duchenne charity. Judging from the total number of fans, views and current top bid, it appears Junior's design holds the edge in the eyes of the public. Bidding on the two bikes will continue until July 31, 2011 at 5:59 PM EST.

Feel free to browse both bikes in our photo galleries, then pick your own winner in our included poll. 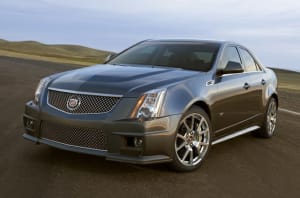