Subaru has released an official video of the company's recent record-breaking efforts at the Isle of Mann TT. As you may recall, the official sponsor of the race dusted off an impressive elapsed time of 19 minutes and 37 seconds while averaging 115.356 mph. If that's not impressive enough, driver Mark Higgins cracked the 160 mph barrier while blasting through the island course. All told, the U.S.-spec WRX STI clipped through 200 corners, including one spot where the driver and co-driver nearly went tumbling at 130 mph.

Subaru says that the car was left mechanically stock save a few safety additions. A fire-suppression system and roll cage were added in the event of a hairy situation, as well as a set of competition seats and belts. Stouter Mintex brake pads were also fitted for the run, though the stock calipers and rotors stayed along for the ride. The WRX STI also boasted an even freer-flowing exhaust, and engineers nixed the speed limiter, which allowed Higgins to crank the turbocharged flat-four up to 162 mph. Finally, a set of Tein dampers helped the winged machine tackle the uneven pavement and massive jumps of the course. Hit the jump to see the recap video for yourself.

CHERRY HILL, N.J., June 23, 2011 /PRNewswire/ -- Subaru of America, Inc. has released a new YouTube video of the 2011 Subaru WRX STI setting an all-time course record for the historic Isle of Man TT Mountain Course. The 5 minute 25 second video highlights in graphic detail the speed and drama surrounding rally driver Mark Higgins' lap that averaged 115.356 MPH. After the run, Higgins talks through the "moment" at Brey Hill when he momentarily loses, and then regains, control of the WRX STI at more than 150 MPH.

Driving a US specification 2011 Subaru WRX STI, Higgins achieved speeds of 162 MPH and a lapped time of 19 minutes 37 seconds over the 37-mile track, navigating more than 200 corners.

"This is one of the most daunting tracks I have ever driven, and the most terrifying," said Higgins, a Manx native. "We were only able to get two practice runs and on our second practice I had the biggest 'moment' of my career. We had a passenger on the run and so coming into Bray Hill at more than 150 MPH, the extra weight compressed the suspension more than on previous runs and shifted the Subaru to the left and then right as I corrected--it was a real tank slapper. The whole thing went by so quickly that we never slowed below 110 MPH, and then we were back on the power. It was amazing and the helicopter shots really show just how hairy it really was."

The WRX STI was a production US spec car running a standard 305 HP turbocharged boxer engine. Some safety modifications were made. The Subaru was equipped with a Lifeline fire suppression system, Hockley Motorsports roll cage, motordrive competition seats, Mintex brake pads (but stock calipers and rotors), and a louder open exhaust to warn spectators of the on-coming car. The speed limiter was turned off to allow a higher maximum speed; off-the shelf Tien springs and dampers were added to accommodate the numerous high-speed jumps on the circuit, sending the WRX STI almost four feet off the ground. The car ran on street legal Pirelli P Zero Trofeo tires. 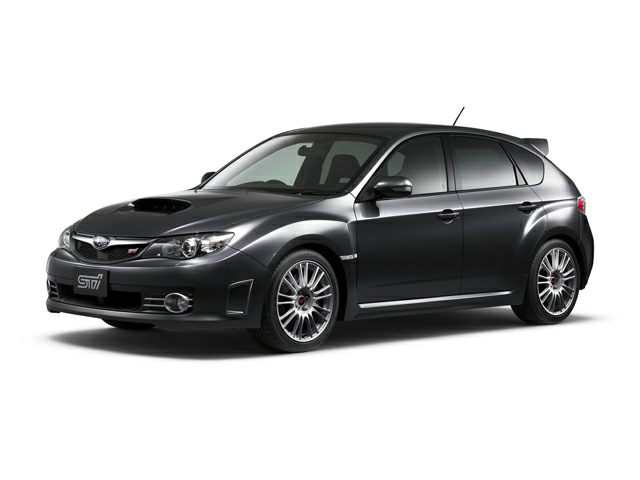