View All Specs
4 Reviews
Serving Notice To The Subcompact Segment

It's been a busy two years in the subcompact world. Newcomers like the Ford Fiesta and Mazda2 have made it clear they intend to give models like the Honda Fit, Toyota Yaris and segment volume leader Nissan Versa a run for their small-displacement money. Even General Motors is getting into the fray with the upcoming 2012 Chevrolet Sonic after years of trying to pass off the Aveo as legitimate transportation. So when Hyundai announced it was taking the knife to its Accent, we knew to expect good things.

The Korean automaker hasn't been one to mess around lately, and vehicles like the all-new Elantra and redesigned Sonata have helped push the manufacturer to the highest market share in the company's history – 5.6 percent in May. With the segment's first direct-injection four-cylinder engine, the buyer's choice of a six-speed manual or automatic transmission, an impossibly low MSRP and 40 mpg highway from every model, it's clear that the 2012 Hyundai Accent is intent on eclipsing the competition.

Hyundai has wrapped the 2012 Accent in the company's fluidic design styling, and while some feel the language can be a bit overwrought on models like the Sonata, it looks right at home on a canvas this small. Up front, designers have paired the corporate hexagonal grille with aggressive headlights and stylized fog lamps set low in the front fascia for an expressive face that flows easily into the hatchback's side. Lines pull from the headlights into the hood and up the A-pillar for a cohesive look. Similarly, an athletic crease originates at the front fog lights and runs upward all the way to the vehicle's tail lamps for a sense of motion.

A small up-kick in the C-pillar and a sloping roof line protect the five-door from looking overly boxy or cumbersome, and our tester came with attractive 16-inch alloy wheels shod in low-rolling resistance rubber. The rear of the vehicle offers a large, attractive valance with inset reflective markers, while tall taillamps skirt a narrow-ish hatch. The back glass has been kept somewhat small for our tastes, though a roof-mounted spoiler is standard on all models. The design is clean and well-executed on the whole, though the center-mounted latch handle looks like an afterthought.

Hyundai offers the 2012 Accent with three interior colors – beige, gray and black. Our tester came in the darkest of that trio, though we'd pick the two-tone beige option if it were our name on the dotted line. Regardless of color, the upper dash is drawn with sweeping lines that flow downward toward the thin center stack and shift lever. It's a good look that strikes us as more mature (if traditional) than competitors like the upcoming Sonic or even the Fiesta. Hyundai hasn't shied away from using hard plastics on the dash and waterfall, though the pieces don't feel cheap or easily-scratched. Instead of lacing the pieces in a faux-leather grain, the automaker opted for an attractive raised check pattern. We like it.

Controls for the stereo, heating and cooling are second-nature and easy to navigate without relying on an overly complicated array of buttons. We're looking at you, Ford. Behind the rear hatch, the 2012 Accent delivers 21.2 cubic feet of cargo room with the rear seats up, which is more space than significantly larger and more expensive vehicles. For reference, the 2011 Subaru Impreza hatch and 2011 Mitsubishi Lancer Sportback serve up 19 and 13.8 cubic feet of cargo area, respectively, while the 2011 Toyota Matrix lands at 19.8 cubic feet. Fold the Hyundai's seats down and you'll be met with an even more impressive 47.5 cubic feet of room.

Buyers will be able to choose from three trim levels on the Accent. Four-door models are relegated to GLS spec, while the five-door hatch can only be had in slightly better equipped GS and SE guises. Our chariot came swaddled in the latter, which includes a rash of equipment. A six-speaker sound system with XM satellite radio, MP3 capability and iPod connectivity are standard as are USB and auxiliary jacks as well as Bluetooth hands-free calling. Power windows, doors and locks are part of the recipe, as is a leather-wrapped, multi-function steering wheel and a matching shift knob.

Hyundai has also included the kind of safety tech we've come to expect from every automaker, including active front headrests and enough airbags to raise the Bismarck. Front, front side impact and side curtain supplemental restraints are all standard along with traction control and electronic stability control.

Under the hood, the 2012 Accent rocks a direct-injection 1.6-liter four-cylinder engine good for 138 horsepower at 6,300 rpm and 123 pound-feet of torque at 4,850 rpm, while delivering 30 miles per gallon in the city and 40 mpg on the highway in every configuration. For the record, that's 18 more horsepower than the Fiesta. In fact, the Accent will be the most powerful vehicle in its class until the 2012 Chevrolet Sonic touches down later this year. (The Bowtie hatch packs the same horsepower when equipped with an optional turbocharged four-cylinder engine, but 25 more lb-ft of torque.)

Even so, the Accent holds an impressive fuel economy advantage over its rivals, besting the Honda Fit, Mazda2 and Toyota Yaris by seven, five and four mpg highway, respectively, when equipped with a manual transmission. That gap narrows somewhat when the Fiesta is optioned with its six-speed dual-clutch transmission. In that configuration, the Fiesta only falls to the Accent by two mpg highway.

Hyundai has pulled no engineering punches when it came to fuel economy on the Accent, starting with its engine. Engineers translated many of the lessons gleaned from the development of the company's turbocharged 2.0-liter and naturally-aspirated 2.4-liter four-cylinder powerplants. Along with direct-injection, the tiny four-pot boasts dual continuous variable valve timing, an offset crankshaft to decrease friction losses, a variable intake system and electronic throttle control.

The Accent also makes use of a slew of other fuel-saving technologies, including electric power steering, an alternator management system and low-rolling resistance tires. All told, the 2012 Accent is a whopping 18.1-percent more fuel efficient than its manual transmission-equipped predecessor.

Given the Accent's focus on fuel economy, we expected a somewhat limp driving experience, and while this isn't the sportiest vehicle in the segment (hello, Mazda), we weren't disappointed by the hatchback's acceleration, handling or on-road manners. With a MacPherson strut suspension up front and a torsion-beam rear, the five-door delivers a comfortable ride both in city driving and on the highway. The environment behind the wheel is quiet and stable without the jitteriness of most short-wheelbase subcompacts, and the six-speed manual transmission of our tester was easy to row. The clutch is a bit light and vague, but it provides a progressive release that makes for an easy commuter.

While full power comes on fairly high in the rev range, this isn't a vehicle that enjoys a flogging. The 1.6-liter four-cylinder isn't a particularly quick-revving mill, and its mpg-minded rubber doesn't provide enough grip for any serious corner carving. On the plus side of the ledger, with a curb weight of 2,430 pounds and one of the best power-to-weight ratios in the class, the Accent made sure we never felt like we were going to be run down by traffic – jumping up to highway speed from an on-ramp takes little effort.

The Accent is also the only car in the subcompact segment to boast disc brakes at all four corners as standard equipment, and as a result, Hyundai says it only takes around 138 feet to stop from 60 miles per hour. The Ford Fiesta, meanwhile, soaks up around 159 feet of asphalt before coming to a stop. We imagine that the Hyundai would fair even better with some stickier rubber.

The 2012 Accent five-door equipped with a six-speed manual transmission will hit your wallet for $12,445 plus a $760 freight charge when it hits dealer lots by July. That's $1,290 less than the equivalent 2012 Chevrolet Sonic and $795 less than the 2011 Ford Fiesta while offering better fuel economy and more power than both base models. Hyundai says that the most expensive buildable Accent will carry a price of $16,795, and our well-equipped tester tipped the scales at $15,830 including destination charge.

So where does the Accent fit in the increasingly crowded subcompact spectrum? Based on this first drive, the new Korean hatch has all the makings of one of the best all-around vehicles in the segment. With plenty of power, space and fuel efficiency in a low-cost package, Hyundai has hit all the right notes. Now, about a sporty version... 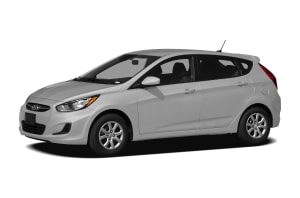