Chris Shunk
With over 13,000 taxis in Manhattan, it's easy to blend in. Over half of those taxis are of the Crown Victoria variety, while a quarter are Ford Escape models. Hybrids are beginning to enter the New York taxi fleets in solid numbers, but a certain model has been singled out as being "too powerful."

The New York Times reports that The Taxi and Limousine Commission has recently passed a regulation removing the Lexus RX 450h from the list of approved cabs. We've never thought of the RX hybrid as "too powerful," but that doesn't seem to matter to the commission.

The move, while a bit odd, will only affect six cab owners. But those owners dropped over $40,000 for their high-end taxis, and more money was spent adding the required yellow paint, lights, a camera and television screen. The owners are hoping to have their Lexus cabs grandfathered in before the Nissan NV200 van is officially ushered in as the Taxi of Tomorrow, but the Taxi and Limousine Commission isn't commenting on the issue.

For our money, it seems as though the Commission is a bit off on this one. After all, most any passenger is going to enjoy the luxury taxi experience, especially since the fares are the same as they are in an Escape or Crown Vic. And "too powerful?" Seriously? 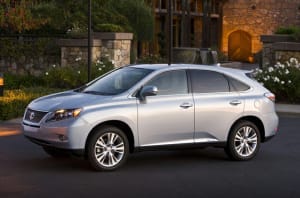