Though it's cleverly disguised as an automobile, don't be fooled. The 2011 Dodge Challenger SRT8 392 is the world's ultimate portable smoke generator. The fact that it can pull double-duty as a method of transportation is nothing but a quirky side benefit to its purpose in life. Consider it a value-added feature that helps justify its seemingly high $45,000 price tag.

It's really quite ingenious. All that's required to create your own massive plume of thick white smoke is premium-grade gasoline and two 245/45ZR20 tires, both of which are readily available, and both of which are consumed in roughly equal quantities. The actual process of making the smoke-screen is so simple even a caveman could do it. One step: Mash the throttle pedal to the floorboard. Done.

Strangely enough, during our First Drive of the beast, we found out that it's possible to do other things with the Dodge Challenger SRT8 392. For instance, with a modicum of restraint at the specific point at which your right foot comes into contact with the throttle pedal, you can drive the 392 in a straight line. Equally as surprising, at least to those who know anything about classic muscle cars, the Challenger is even capable of traveling in directions other than forward, and for more than 1,320 feet at a time.

We're just as shocked as you.

We decided to borrow one of these weapons of mass (tire) destruction for a week with two goals in mind: to see both how much smoke can be created from one set of tires (or one tank of gasoline, whichever comes first...) and how the most powerful Challenger fulfills the unlikely role of an everyday driver. Continue reading...

Dodge has done an absolutely stunning job of camouflaging the Challenger SRT8 392 as an automobile. When compared to its most direct rivals, the Ford Mustang and Chevrolet Camaro, the Challenger is the design that most successfully draws on its muscle-bound coupe heritage. To our eyes, the high beltline, kinked rear quarter panels, recessed front grille, (non-functional) hood scoops and beefy oversize tires all add up to one menacing muscle car. Not beautiful necessarily – just mean, reared up on its haunches, ready to pounce like a jackrabbit with a mysterious nasty streak.

Perhaps Dodge missed the message that it was supposed to extend the retro cues past the exterior and into the interior. We're sorry to report that style has most assuredly taken a back seat to function inside the Challenger SRT8 392. Despite the fact that Dodge saw fit to echo its colorful '70s past by fitting our tester with eye-searingly bright white-and-blue leather seating surfaces and door panels (rather soft and buttery leather, at that), there's just no hiding the fact that the instrument binnacle and dashboard are nothing more than massive blocks of solid black plastic, albeit covered in soft-touch materials. That said, the front buckets are admirably comfortable and supportive. Even when the aforementioned throttle is gasping for air under the weight of our size-13s or when all four tires are screaming for mercy at the very edge of adhesion, the seats do a fine and dandy job of keeping the front two occupants firmly in place.

Sadly, the same is true for the rear passengers, bless their souls. Only in this case, it's not the ample bolstering keeping the two average-sized adults from sliding back and forth – it's because they're on top of each other. Despite its ample exterior dimensions and 4,100-plus-pound curb weight, we've come to think of the Challenger as a two-passenger coupe. In fairness, the Mustang and Camaro have even worse back seats – at least the Challenger has some head- and leg-room back there.

We wouldn't make such a big deal about the scant interior space if the Challenger weren't such a large car. But it is a Large Car... by exterior dimensions at least. Break out the measuring tape and you'll find that the Challenger has roughly the same rear-seat accommodations as a compact sedan, only there's significantly less glass back there, which can make for some claustrophobic passengers if you plan on using the SRT8 392 as The Dodge Boys intended... as a smoke generator, of course. Or as a missile pointed straight down the gullet of a quarter-mile-long strip of asphalt.

If there's anything else the 2011 Challenger SRT8 392 is good at, it's accelerating from a dead stop like a 14-year-old girl going for the best seat in the house at a Twilight sequel on opening night.

You can tell the SRT crew had acceleration on the brain when you browse through the list of functions that the in-dash computer is capable of measuring. Sure, there are functions for lateral Gs and braking performance, but the real items of import are the 0-60 and quarter-mile counters. We had a little bit of fun with the LCD readouts, measuring a best run to 60 miles per hour in an unverified 4.2 seconds. How accurate is it? We have no idea. How satisfying is it to set a new fastest time? Immensely.

The powers-that-be at Dodge dedicated one whole screen of performance data to lateral acceleration, measured in G forces. And you know what? This baby can handle, aided no doubt by the enlarged sway bars, lowered ride height, massive Goodyears and reasonable 45/55 front/rear weight distribution. Perhaps the biggest hurdle to overcome when trying to hustle the SRT8 392 is that the stability and traction control systems can't keep up with the rest of the program, and manually defeating them means you'd better have an extremely deft set of feet lest you wish to do your best Tokyo Drift impersonation.

Similarly, braking performance is very good, with excellent power from the quartet of dinner-plate-size Brembo discs and no discernible fade to speak of. No, this Challenger won't be hanging with a BMW M3 at Laguna Seca (Dodge seems content to let the Ford Mustang target that particular German benchmark), but that seems mostly superfluous anyway. As we've eluded to before, the 392 is all about the engine.

And what an engine it is. Befitting its role as a legitimate muscle car, the SRT8's 6.4 liters of displacement is measured out in Yankee-appropriate cubic inches. Lest you misunderstand, that's 392 cubic inches, a fact played up at every possible opportunity, from the big red badges on the flanks to the ghastly embroidery on the white and blue leather seats. Leave the subtly to the Europeans now controlling Chrysler's product portfolio.

For those keeping track, this latest Hemi monster is larger and more powerful than the previous-generation SRT8 mill, which measured 6.1 liters and put out 425 horsepower. Nothing to scoff at, surely... but this one goes to eleven.

As you would expect from 392 cubic inches, horsepower is to be found in abundance. Dodge officially rates the 2011 Challenger SRT8 392 as producing 470 horsepower at 6,000 rpm and a matching 470 pound-feet of torque at 4,200 rpm, but our finely calibrated seat-of-the-pants dyno is suspicious. And so are the rear tires. We'd wager there are a few more ponies lurking underhood than Dodge is letting on.

Power delivery redefines the term instant. Unlike many modern powerplants that take their time building power, Chrysler's naturally aspirated Hemi V8s have always been more than willing to deliver the goods right off idle. There's no waiting for this rocket sled to kick into high gear. Keep your foot planted for about 12 and a half seconds and you'll be seeing the quarter-mile timing lights in your rear-view mirror. That, friends, is fast. And, just as importantly, it feels even faster.

Fuel economy? Well, that largely depends on the weight of your right foot. The EPA estimates you can expect 14 miles per gallon in the city and 23 on the highway. We managed 15.5 in our regular driving duties.

It bears mentioning that the Challenger SRT8 392 is not the quickest muscle car money can buy – the Las Vegas-based boys and girls from Shelby have that particular timeslip on straight lockdown with their GT500, at least until the Camaro ZL1 arrives. But that hardly seems to matter out on the road. There isn't a single car on the market today that ticks all the muscle car boxes the way this Challenger does. From its looks to its new engine to the sound of the big Hemi exhaling, the Challenger SRT8 392 screams throwback Americana in a way the Mustang and Camaro just can't match. Is it a better car? No, not really. Is it a better muscle car? Let there be no doubt. 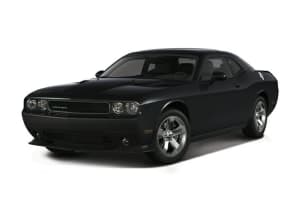