Nearly every Porsche has a Sport button, and the 2011 Cayman R is no different. It quickens the PDK gearbox's shifts, tightens throttle response and allows a bit more slip. I should've paid more attention to those last two bits during our morning briefing.

On the rain- and occasionally hail-battered island roads of Mallorca, Spain, it took all of a quarter-inch of throttle travel to realize that the ultra-slippery tarmac partnered with the high-performance summer rubber were a match made in Hell. One minute, my co-driver ( Motor Trend scribe and Autoblog alum Jonny Lieberman) was looking down at the route book; the next, he was staring at the sheer face of a rock wall. Whoops.

Over the course of our three-hour drive, I lost count how many times this scenario played out. And it wasn't just my plebeian skills. Lieberman – who told me his initial thought went something like "$#%^&@* Damon!" – quickly admitted after he got behind the wheel that our weather/tire combo was destined to put us off a cliff. The rest of the North American contingent on the launch was busy dealing with the same issues, but there was something deceptively different about these impromptu tail-out antics.

Despite the lamentably slick conditions, the overriding sense of traction – that inescapable connection between hands, ass and road – was the most transparent I've experienced in recent memory. Even in these woeful conditions, I was perpetually aware of just how much – or little – grip was available at every turn. I was constantly on edge. Never relaxed and, in a sick way, kind of loving it.

That feeling lasted right up until my second lap of Circuito Mallorca RennArena.
Never have I wanted so desperately to get off a road course. Struggling to keep up with the Caymans in front, turn after turn was an exercise in minute toe manipulations. I imagine Natalie Portman's ballet beau would've been proud, but once I learned to stop worrying and love the traction control, things evened out – if only for a curve or two. All praise Porsche Stability Management! It's just too bad I never had the chance to experience the heightened levels of high-speed grip the chassis was begging to impart.

So, with those driving conditions and relatively low-speed impressions in mind, let's get stuck in the specs and stats.

The Cayman R is essentially a fixed-roof version of Porsche's undisputed King of Fun, the Boxster Spyder. Nestled amidships is the same 3.4-liter boxer six-cylinder engine found in the droptop, putting out an additional 10 horsepower over the standard Cayman S. That 330 hp peak comes in at 7,400 rpm – 200 rpm higher than its lesser siblings – while torque remains unchanged at 273 pound-feet (accessed at a rather lofty 4,750 rpm). The extra grunt is thanks to a new head pipe, tweaked ECU and reworked exhaust that's instantly transformed with a quick push of a dash-mounted button. We used more than one tunnel to test out the aural excitement, which you can hear for yourself in the Short Cuts video below.

But the Cayman R story isn't about power. It's about finesse, focus and – most importantly – weight reduction. Porsche's engineers have managed to strip some 121 pounds from the R, swapping out the doors for aluminum units (33 pounds), lightening the wheels (11 pounds) and fitting masterfully supportive and all-day comfortable carbon fiber-backed buckets (26 pounds), along with nixing the sat-nav/stereo and air conditioning (another 33 pounds). However, the latter two are available as no-cost options, and unless you're tracking this thing every weekend, just tick the boxes and thank us later. Porsche says another 15 pounds have been removed by stripping some sound deadening material and a few other non-essentials, like the door handles, which have been swapped with silly fabric pulls. If that's the extreme extent the boffins went to reduce weight, then why did they leave the lighted vanity mirrors? We asked. They laughed.

However, those same officials didn't chuckle when I brought up some back-of-the-napkin math about the power-to-weight ratio of the standard 911 and this $66,300, stripped-out Cayman. The 345-hp, 3,186-pound rear-engined flagship doles out one horsepower for every 9.2 pounds it lugs around. The Cayman R? 8.5 pounds per horsepower. That's getting awfully close, but with both the 911 and the Cayman due for more serious overhauls, we don't think that proximity will last long – something Porsche's people confirmed.

On the gearbox front, buyers have their choice between a six-speed manual and seven-speed PDK, but weight-watchers beware: the slick-shifting dual-clutch box adds an additional 55 pounds to the Cayman R's 2,811-pound curb weight. Predictably, it's what longtime Porsche wheelman Walter Röhrl prefers, but as a no-cost option, we could easily make the case for either. Both are spectacular, and in the case of the PDK, Porsche has fitted proper paddles to the steering wheel to deliver a shifting experience that's thoroughly engaging – if just a slightly less involving than the manual. However, three-pedal addicts will sacrifice a tenth of a second to the speed gods, with the 0-60 mph run happening in 4.7 seconds with the PDK and 4.8 when rowing your own.

The rest of the changes are less dramatic, but add up to something spectacular. The fixed rear spoiler and tweaked undertray reduce rear lift by 40 percent, while the mildly revised aero bits up front reduces lift by an additional 15 percent. The springs, shocks and sway bars have all been swapped out for stiffer stuff, and the ride height comes in at 20mm lower than the standard Cayman S.

All these changes – no matter how slight – help the Cayman R exhibit a near-perfect compromise between road and track. The ride is on the stiff side of ideal, while the standard steel brakes remain predictable and confidence-inspiring once you get past the initial eighth-inch of travel. Optional carbon ceramics remove an additional eight pounds of unsprung weight and around $8,000 from your wallet, but the steel stoppers strike us as the better choice for daily duty and maintenance costs.

More than anything else, what left me consistently amazed was the remarkably direct steering and the sheer volume of information that traveled from the Alcantara coated wheel, through my palms and directly into my central cortex. If there was ever a proper cliche to be used, "telepathic" is it. Weighty without being cumbersome (à la Lotus Elise) yet smooth and frictionless; it's – dare I say – better than the big boy 911.

We'll have to wait to get one in the dry for a full slate of impressions, but from this unfortunately brief first dance, the Cayman R has all the earmarks of the Total Package. For the first time since its introduction, Porsche's middle child has the potential to one-up its ass-engined brethren right from the factory. It's just a shame about the weather – the one thing Porsche's people can't seem to engineer. 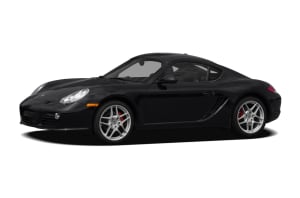