Even before safety was such a critical part of the buying process, Volvo had pushed the envelope by offering cutting-edge technology and cold, hard steel to protect its vehicles' occupants. Today, everything from luxury BMWs to basic Hyundais have five star crash protection, but Volvo is doing what it can to raise the safety bar even higher. The new-for-2007 Volvo S80 is the Swedish automaker's flagship sedan, with amenities like a V8 engine, all-wheel drive, an upscale interior, and classy yet understated looks.

Where the S80 really makes its impression with Volvo faithful, however, is how far the automaker has gone to make its full-size sedan a safety flagship. Volvo has billed the S80 as having the latest safety advancements, while also packing the luxury amenities customers want, so we decided to put the S80 through the wringer in the Autoblog Garage. Hit the jump for impressions from our one-week test of the 2007 Volvo S80 V8 AWD. On our first day with the S80, we had the type of experience that nobody wants to have, especially with kids in the car. On a rainy summer afternoon, we took the kids out for GameWorks and a movie. We were accelerating down an on-ramp and about to merge into traffic when an oncoming truck hit one of the ever-present orange construction barrels. The barrel banked off the cement barrier to our right, and settled directly in front of my intended path. We banked hard to the right at about 45 mph and then immediately back to the left, missing both the barrel and the barrier by no more than 18 inches. To complicate things, the pickup truck didn't slow down and was fish-tailing, so I slammed down on the throttle, and the Yamaha-sourced V8 engine accelerated the Shunk clan out of harms way. In some other cars without the added traction of AWD or a well-tuned suspension, we'd have hit the barrel, the wall, or both. That's a good starting point for any review, and we didn't experience too many downers from there.

At first glance, the S80's design is an evolutionary step from its predecessor, but the aesthetic similarities tell very little of the story. The new S80 has more refined lines than the previous generation, and it's underpinned by the all-new EUCD platform that is shared with the Ford Mondeo and Land Rover LR2. Power comes from either Volvo's new 3.2L inline six (with our without turbocharging), or the transversely-mounted 4.4L V8 engine that was delivered with our tester. Our car also had the Haldex AWD system, which is standard on the V8 and T6, and optional with the base, non-turbo in-line six.

The exterior is largely based on the previous generation S80 penned by the Jan Wilsgaard/Peter Horbury design squad. Lines have been softened in most places, with brightwork and lights coming off much more high-end. The headlights, for example, are bi-Xenon, but their design is clean, without the busy jewel treatment many luxury vehicles receive. Very little chrome is used up front, but the bright work around the grille and Volvo logo really stands out. From the side, the S80's front end is almost shark-like, with the headlights as eyes and the lower air dam looking a lot like a mouth.

Volvo really took care in sculpting the metal to look more aggressive and sporty, as evidenced by the bulging hood, but the Swedish automaker retained the car's trademark C-pillar that flows into its broad shoulders. The S80's wide stance is further accentuated with optional 14-spoke 18" rims with Pirelli rubber.

On the inside, Volvo sticks its neck out a little with more flash and flair. The center stack carries over Volvo's signature waterfall design theme, and we really appreciate the logical, easy to operate layout. Large buttons and easy-to-use HVAC controls can be figured out by a small child. If you want the warm or cool air to hit your feet, simply press the feet on the reclined humanoid shape at your fingertips. If all of these choices are too much to bear, the driver can also simply press the Auto button, and the cabin will become cooler or warmer in seconds with dual zone climate temperatures controlled by a knob on each side. Operating heated and cooled seats, the front or rear defroster, and ventilation is easy to do while driving, as buttons are large and easy to read while on the go.

The driver's cockpit is very comfortable, as the occupant is immersed in high-end leather with well-positioned arm rests and a grippy wheel. Volvo put vehicle data inside the speed and tach gauges, and the needles are short, which looks cool while consolidating all the important information in one place.

One area that is often overlooked by other automakers is the head rest, and the S80 has some of the safest, most comfortable noggin props available. Volvo engineers designed whiplash protection technology into the head rests, protecting drivers from the painful injury in the event of an accident. On a day to day basis, however, the head rest is comfortable to actually use in most driving conditions. This is in stark contrast to many headrests that are small, uncomfortable, and positioned too far back.

Accessing some of the Volvo's safety technology from the cockpit is easy, as adaptive cruise control and rain-sensing wipers can be operated with little fuss. The rain sensors detect water and quantity to vary the speed of the wipers, which is much easier than constantly fussing with the wiper controls as rain picks up or slows down.

The adaptive cruise control functionality is located on the steering wheel, and variables like speed and braking distance are easy to understand. The display for operating adaptive cruise is located in the gauge information screen. We found it to be a great feature for highway driving, since speed fluctuations by other drivers doesn't require you to go back to manual controls, or adjust the cruise setting. Off the freeway, however, we had a few problems. When using adaptive cruise on a two lane road with a center turn lane, on more than one occasion the radar sensors viewed the vehicle waiting to turn in the center lane as a threat, and the system sounded a loud alarm and applied the brakes... hard. Other manufacturers have experienced some of the same problems, which is why some have abandoned or limited the technology.

Another feature on our test vehicle was the BLIS blind-spot protection. It glows orange whenever someone is in the blind-spot and beeps wildly with flashing red lights on the dashboard when you ignore the warning and try to move over anyway. We thoroughly tested this feature and it worked very well, except when we were in traffic and they glowed constantly at both sides. Also, when you're passing other cars, the BLIS system doesn't activate, but when they pass you, it does. It should also be noted that the first few times the flashing red lights with sirens is engaged, it will scare the living daylights out of you. It's probably a good idea to safely test the device so you're ready in the event you set off the alarm.

Driving the S80 can be fun, but Volvo put more emphasis on ride refinement than sporty handling. The S80 does come equipped with optional fun features like adjustable suspension settings of Comfort, Sport, and Advanced. When selecting Advanced, you can actually feel the difference. The six-speed transmission holds its gears longer, and the suspension stiffens noticeably in turns. Steering is also improved versus Volvo's previous generation S80, as feedback increases and agility improves commensurably with speed. A quick jog through the menu settings unveils three settings for steering responsiveness, ranging from low to high force. The difference is more than subtle between the lowest and highest force setting, and we elected to take our force like we take our coffee: strong. This doesn't mean that Volvo can now go toe to toe with a BMW in the handling department, but the ponderous, floating Volvo steering and suspensions of old are long gone.

The 4.4L transversely-mounted Yamaha V8 in our tester had some serious oomph, and we thrashed it relentlessly. The manual shift mode was fun, too, as it enabled us to go right up to red-line before auto-shifting. We would have preferred the more instant gratification of paddle shifters, but shifting in manual mode with the tunnel-mounted shifter was fun nonetheless.

We were able to drive the S80 in heavy rain on several occasions, and were mighty impressed with the Haldex AWD system. All four tires remained so completely tied down to the road at all times, even when we were traversing some serious puddles. We had to remind ourselves on a couple of occasions that other drivers didn't have the same capabilities as our all-wheel-drive sedan, and tone down our four weather driving just a bit.

While we're big fans of the acceleration and sharp handling that come with BMWs, the safe yet entertaining-enough-for-public-roads approach definitely works for the S80. A V8 engine and AWD make the S80 a very fun car, but luxury appointments and safety all around is what makes the S80 a very good car. Volvo will need to work on short-comings like the overtly alarming nature of some of its passive safety devices, and the inadvertent heavy braking during when using the adaptive cruise control, but when overall value is considered, we still feel the S80 will appeal to higher income families and empty-nesters alike. We'd love to get our hands on an S80 T6, however, with its lighter weight, 285-hp engine, standard AWD and $43,000 base price. It may provide much of the fun and refinement of this top-end V8 model that checked out at $54,400, while improving on its observed combined rating of 19.5 mpg. 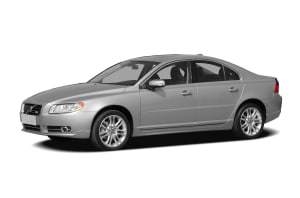