The 2019 Mazda3 Hatchback is quite simply one of the best cars I've ever driven. During my week with one, specifically a range-topping Premium package version for $31,335, I struggled to come up with bad things to say apart from elements like rear visibility and back seat headroom that are directly related to its distinctive, avant garde design. That's an acceptable tradeoff in my book.

So many of the new 3's elements can serve as a measuring stick for other cars. Not just its specific compact hatchback/sedan class, but all other cars, period. I had the Mercedes CLS 450 at the exact time, a car I deeply appreciate and that cost $69,000 more, and yet it was a struggle to decide which I wanted to drive.

Perhaps not surprising given the 3's history, but the measuring stick is set first by the handling. It dances between corners with composure and feedback that you just don't get in cars any more ­– let alone at this price point. This is a car you feel through your butt, your heels on the floor and your hands on the wheel. Everything is just so right. And it should be noted that I came to this conclusion before remembering that Mazda switched to a cheaper, less sophisticated torsion beam rear suspension for this latest model. Perhaps you can tell the difference driving 10/10ths at a test track, but in the real world, I certainly didn't notice or log a complaint.

Grip is superb. Even when the tires gave way a bit on my mountain road evaluation route, there was only a bit of squealing and it resolutely whipped itself through hairpins with shockingly little understeer for a front-drive-based car, helped no doubt by its all-wheel drive system. It would be interesting to see how much understeer the front-drive versions allow, and whether AWD is mitigating torque steer given the 3's not-insignificant power.

As it is, the 3's standard 2.5-liter four-cylinder produces 186 horsepower and 186 pound-feet of torque, which is substantially better than virtually every other base engine in the segment. Its throttle response should be copied by everyone, as should the steering. OK, maybe not Porsche, which I keep finding myself drawing comparisons to whenever experiencing a new Mazda. Take that as the compliment it seems to be.

I'd also like to note that the 3 has a six-speed automatic transmission rather than an easily confused eight-, nine- or eleventy-speed unit. Or a damn CVT. Although it's actually quite the clever bit of engineering as described in this handy video, for all intents and purposes, it has six gears in a transmission that seems to know exactly which gear to select at any given time. It even has a regular PRND shifter, not some new-fangled method that's different for the sake of being different.

When zipping along my evaluation route, it smartly stayed in third gear rather than selecting a higher fuel-saving one. It knew what was up. Meanwhile, when in Sport mode, braking into a corner would quickly engage a downshift much as the best Sport modes of various luxury brands do. It then kept that lower gear for the right amount of time rather than clumsily hanging onto it. I never reached for the included shift paddles, which is always a sign of a smart transmission.

Yet, despite having fewer gears and more power than its competition, the automatic 3 hatchback still achieves 30 mpg combined. The test car's all-wheel drive results in a 27-mpg combined figure. While that pales in comparison to what the Subaru Impreza, the only other all-wheel drive vehicle in its class returns – 31 mpg combined – the Impreza has 34 fewer horsepower and a buzzy CVT. For what additional enjoyment you extract from a 3 with AWD, the fuel economy penalty seems insignificant. 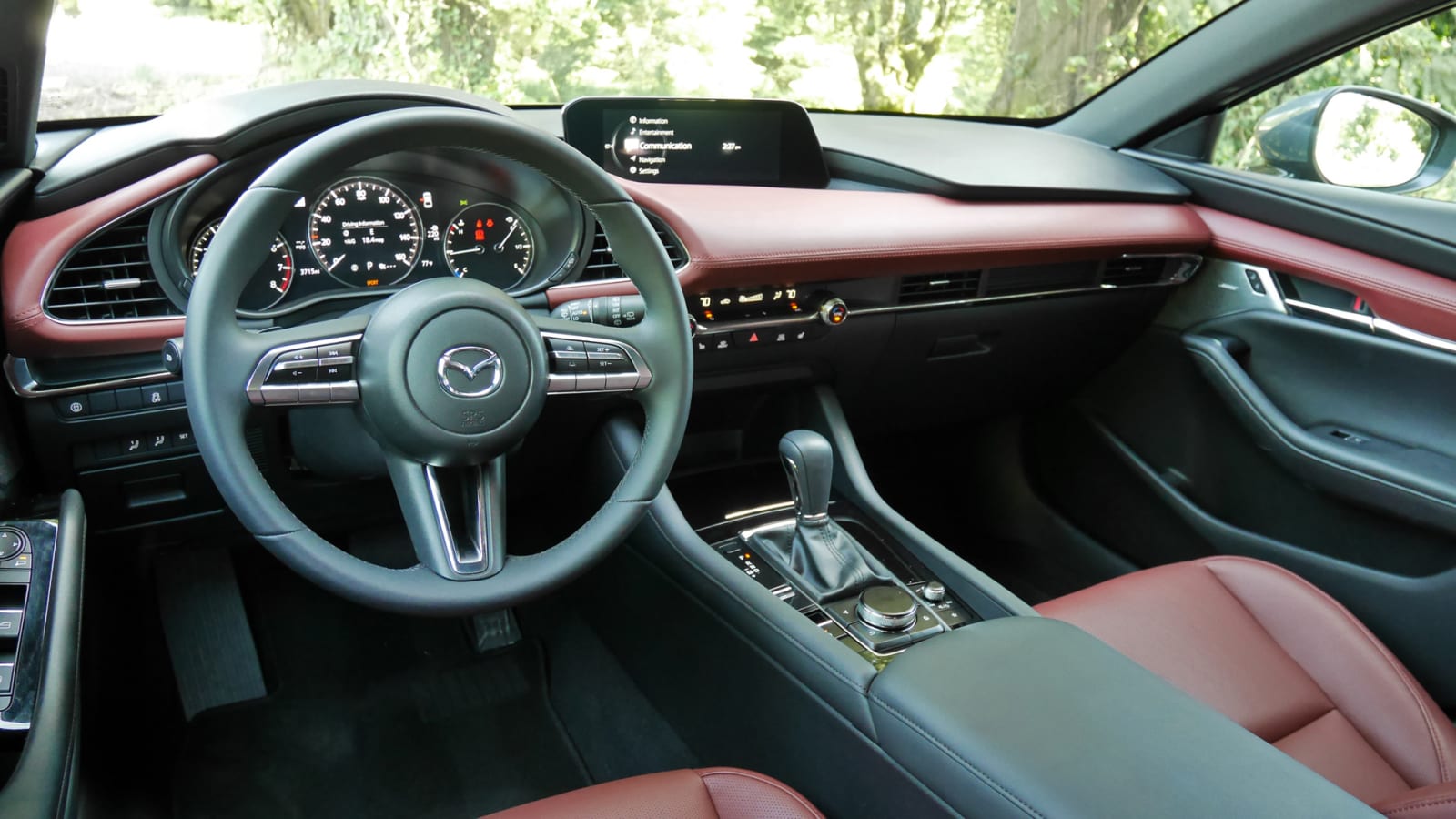 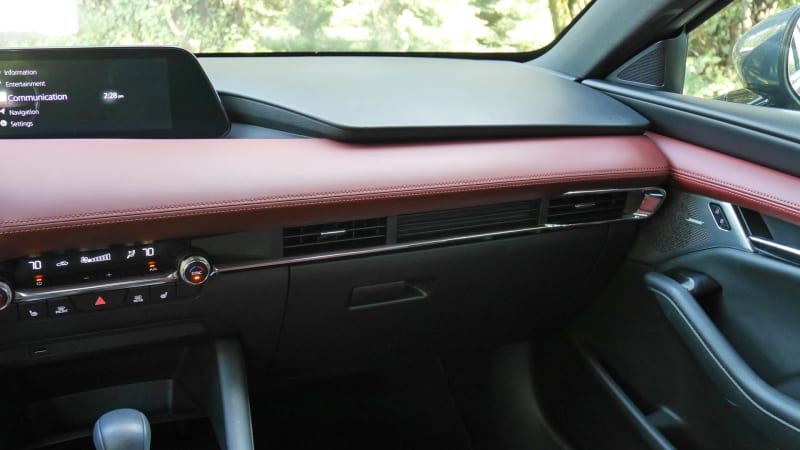 Moving inside, the Mazda 3 quite simply makes you go "wow." A Honda Civic or Toyota Corolla, which are actually quite nice, look and feel like they should cost $10,000 less. Whatever trim level of 3 you’re looking at, the key to its wow factor is how the Mazda’s design removes visual clutter by reducing switchgear and effectively hiding air vents and door handles. It just looks special. This is a memorable, perhaps iconic cabin that could influence others in the future.

It's also functional. The steering wheel, which looks sensational, is an absolute treat to hold. There's considerable center console space, with covered cupholders and multiple bins that each have a USB port. There's also wireless charging. Mazda's tech interface, which had lagged behind its competition due to key usability issues, has been cleaned up. The dashtop screen is large and easy to see. The knob that controls it is large, not unlike BMW's iDrive, and actually ergonomically placed on the center console. (Certain Audis require "T-Rex arms" to operate the MMI knob). Like Audi's old MMI and unlike BMW, Mazda wisely keeps the volume knob close by, but unlike Audi, it provides a radio favorites button (the star) to easily access your presets.

The old Mazda tech interface technically had touchscreen functionality, but only when stopped, so really, it didn't. The new one dispenses with that entirely as Mazda engineers determined that hunting for touch-operating icons can be distracting. They're not wrong, and the higher-mounted screen is certainly easier to read at a glance. Now, the lack of a touchscreen does make it harder to select icons in Apple CarPlay, but the knob controller also makes scrolling through playlists or podcasts easier . It's an acceptable give and take, then. 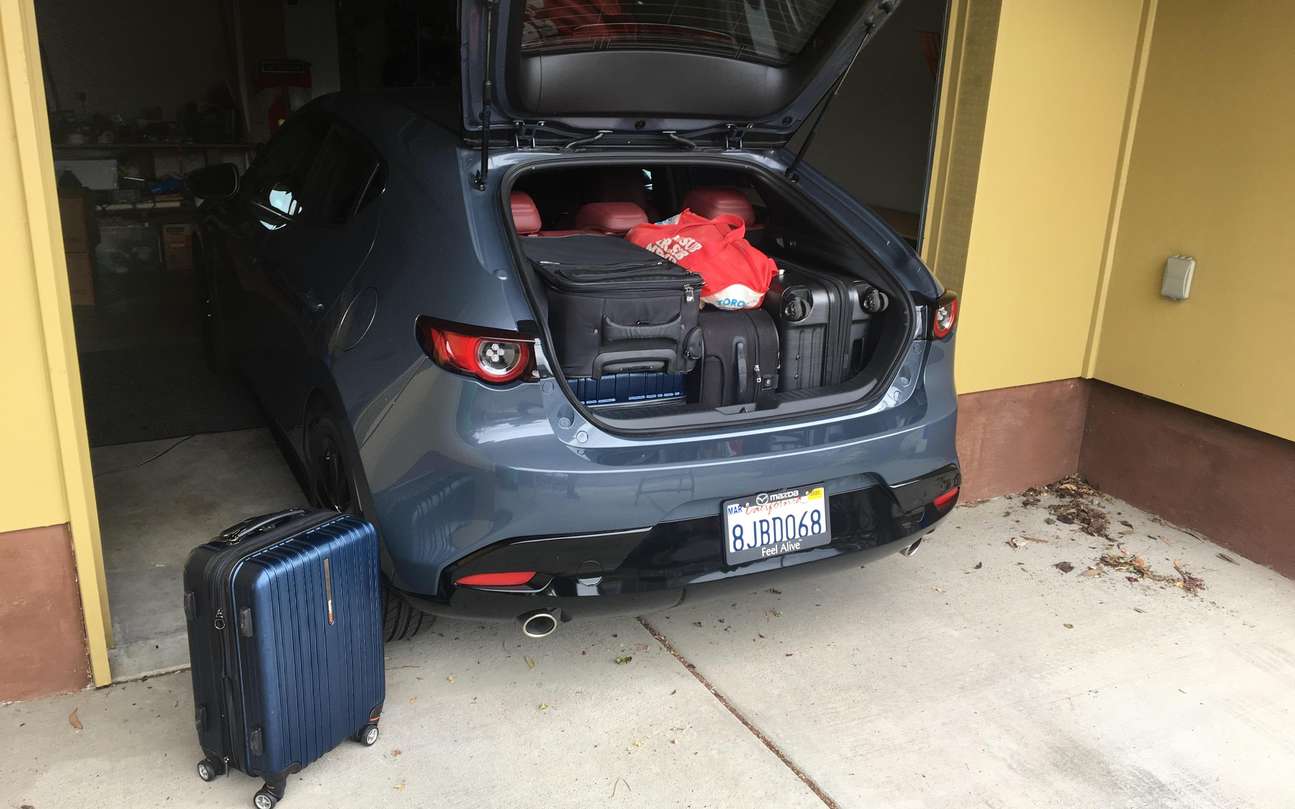 In terms of space and comfort, there's just enough adjustment provided by the power-adjustable driver seat for this 6-foot-3 pilot, while Mazda must once again be commended for literally studying the just-right positioning of primary driving controls and placing them as such. Wheel, shifter, pedals … everything is where it's ergonomically supposed to be.

Back seat space is OK for the segment, which is frankly good enough. This is a compact car, not a limo. Headroom, however, is a bit tight, and that unusually fat rear pillar makes things a bit dungeon-y back there. Again, though, I consider that an acceptable tradeoff for such distinctive styling. If the cave-like rear space is a problem, you can always get the more conventional sedan with its airier greenhouse.

That said, you would be missing out on the hatchback's cargo space, which is surprisingly generous. I expected that unusual rear end would compromise things, but in fact, the sizeable 20.1-cubic-foot space is surprisingly deep and useful. As the video above shows, I managed to fit nearly all the luggage from my garage inside. By comparison, the Subaru Impreza/Crosstrek can manage an extra suitcase, while Toyota Corolla Hatchback can barely fit paper grocery bags ... 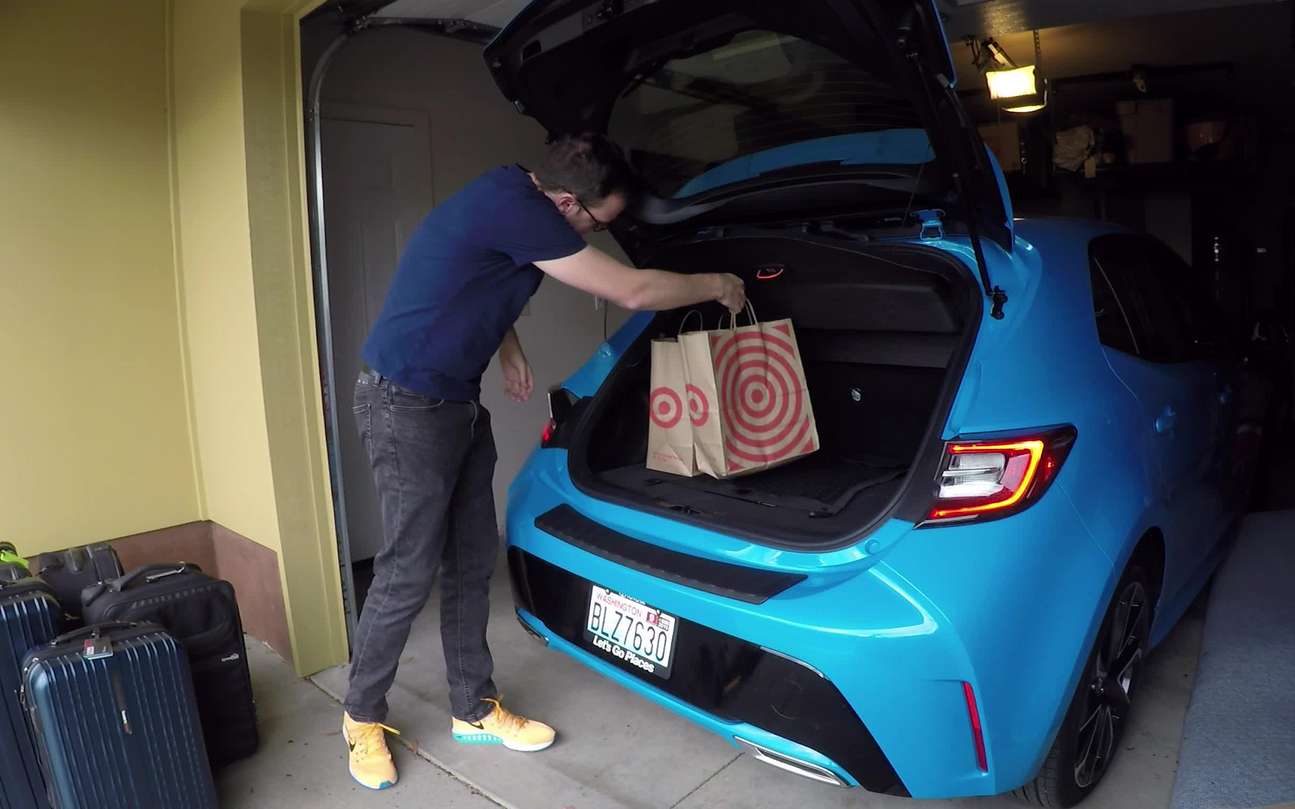 Finally, a word about the safety tech, which refreshingly doesn't treat you like a moron. Beeping is kept to a minimum, it's not hyperactive, and there were no false alarms. It's basically the anti-Subaru. The adaptive cruise control also accelerates and brakes much like a person would, while I appreciate the little redundant icons in the head-up display that tell you there are cars in your blind spot. Safety aids should be there to save your bacon, not drive you so crazy you turn them off.

Again, so much about the 2019 Mazda 3 can be held up as an example of how do to nearly everything right. That it looks distinctively gorgeous is only a thick slathering of icing on a delicious cake. Really, this is as close to perfection as you can get in a car these days. If you're considering buying a new car, regardless of the price tag, I couldn't recommend it more.