Zebulon Pike, the military commander and explorer for whom America's best-known mountain is named, never reached "his" peak, even though he tried. Over 200 years later, with a grin so giddy that I blame it on the thin air at 14,114 feet, I crested the summit of Pikes Peak a tick over 14 minutes after leaving the starting line. I was behind the wheel of the most fun-to-drive crossover anyone has ever built: the Porsche Macan GTS.

I can't take credit for what must be one of the fastest unmodified sprints to the top. That goes to Pikes Peak legend Jeff Zwart, who led a pack of journalists in Porsche's latest Macan up the hugely demanding paved road. Zwart wasn't piloting a Macan GTS; instead, he was behind the wheel of the 911 GT2 he drove back in 2002 when much of the route was gravel. Today's pavement provides more grip but also less room for error, Zwart told us. Unforgiving, he called the mountain. That's just what you want to hear at 6:30 a.m. when Zwart, two cars in front of you, takes off at a racing start.

Pressed later, Zwart admitted he drove at a fraction of his racing pace while juggling two radios (one to communicate with us and one for park rangers to alert him to wildlife on the road) and shifting a manual transmission. Strapped into a Macan GTS, however, I found the trip plenty stressful – but that's because of the blind corners, the narrow road, the frost-heaved pavement, the blinding sun, and, of course, those unforgiving drop-offs. The polished GTS, which slots in between the mainstream Macan S and the bonkers Macan Turbo, proved unflappable. 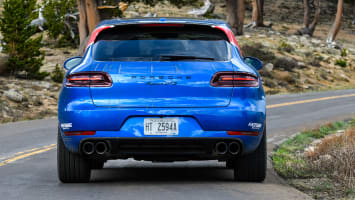 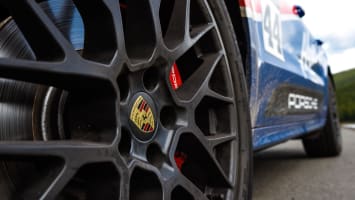 Of the Macan flavors, which will soon include a four-cylinder base model, the GTS is best suited to carving through the Rockies. Its 3.0-liter, twin-turbo V6 comes from the Macan S, but Porsche dials its boost from 14 to 17.4 psi, bringing output to 360 horsepower at 6,000 rpm (up 20) and 369 pound-feet of torque from 1,650 to 4,000 rpm (up 30). The only gearbox available is the PDK (Porsche Doppelkupplung) seven-speed dual-clutch transmission with Comfort, Sport, and Sport Plus modes.

In addition to the power increase, the GTS gets a standard air suspension that sits 10 millimeters lower than the optional version for the S and the Turbo. Front brakes cribbed from the Turbo and a switchable sport exhaust with a single flapper valve round out the performance changes. Add the air suspension, 20-inch alloy wheels, and a few cosmetic goodies standard on the GTS to an S, and what was a $12,800 price difference becomes a more palatable $5,000 disparity.

To be honest, Pikes Peak didn't give us a real feel for the GTS's improvements. It can snow year round at the summit, so our test car was fitted with all-season rubber that inevitably dulled some steering feel and reduced at-the-limit grip. While the turbo helps compensate for the power losses at this altitude, there's considerable lag until that boost comes on.

The day didn't end there, though. We set off for Mt. Evans, the highest paved road in America next. My trek between Colorado's two most important peaks was more successful than ol' Zebulon's 1808 exploration of the Louisiana Purchase; Spaniards captured Pike and his men when they drifted into what was then New Spain. My route took the GTS over bumpy pavement and loose gravel along the Platte River; left in Comfort mode, the Macan GTS dutifully absorbed the irregular terrain with only a hint of stiffness. 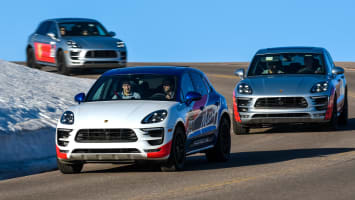 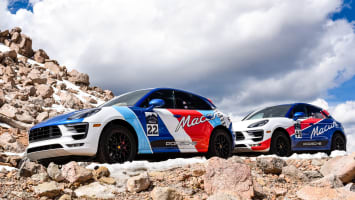 The Macan GTS features a button marked Off Road that jacks the air suspension up an extra 10 millimeters. Nobody will intentionally push that button. Drivers will (and should) dial up Sport and Sport Plus. In those modes, the Macan corners with less lean yet manages to massage out road imperfections. The GTS's specifically tuned air suspension quickly revealed itself as the crossover's prime asset.

Despite the setup's relative perfection, the GTS's nose still pushes into corners and its steering, although direct, can feel numb. These are the compromises that must be made to give the driver a seating position that towers over sports cars. The good news is that Porsche has largely avoided turning the GTS into a clone of the Audi SQ5. The Porsche, frankly, doesn't sound as good as the SQ5, but it hides its center of gravity better.

While the Macan GTS has some minor flaws, the improvements over the S are appreciable. Together they bring the already terrific Macan even closer to the feeling of a Boxster on stilts. After all, we got to the top of the peak that Pike couldn't. Two mountains in one day, Porsche gloated. Seems like old Zeb would have been impressed. 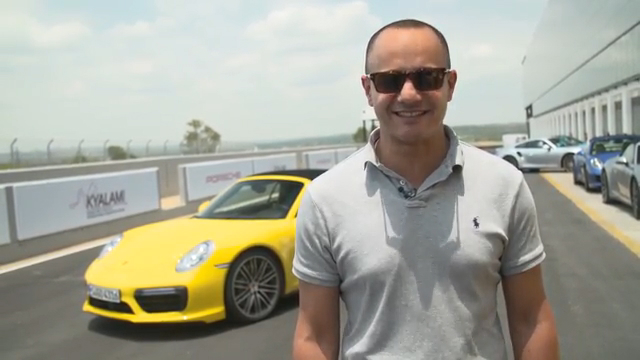