GLENEDEN BEACH, Ore. – How does 39.4 mpg work for you? That's the fuel economy we achieved during 454 miles of driving a 2021 Toyota Sienna XLE AWD, which is quite simply exceptional. Though virtually every mile of that was two-lane highways, half of that total was achieved with four adults aboard plus a baby, two 20-pound dogs and every inch of remaining space filled with their collective stuff. In other words, this was not some hypermiling, best-case-scenario fuel-economy test. In fact, given the aforementioned baby screaming his head off most of the way, the throttle was at times rather liberally used to, paraphrase, "Get us the F home." I should also note that 39.4 mpg is an actual calculation based on the trip odometer and gas pump – the in-car fuel economy gauge actually showed our efficiency as slightly worse at 38.4 mpg.

According to the EPA, the 2021 Sienna is estimated to get 36 mpg highway regardless of front- or all-wheel drive, with the FWD version doing ever-so-slightly better combined at 36 mpg versus 35. The same drivers also managed only 29.6 mpg during the Sienna vs Pacifica Hybrid comparison test despite having far less weight aboard (the route was totally different and with fewer miles driven, so that's less statistically sound). With any of these numbers, however, you're bound to save many hundreds of dollars every year filling up the Sienna versus the Honda Odyssey, Kia Carnival or V6-powered Chrysler Pacifica, which all get 22 mpg combined. It can't be emphasized enough how much of an advantage this gives the Sienna compared to everything but the uniquely plug-in-able Pacifica Hybrid.

Yet, there is more to report from my extended time with the new Sienna than simply its better-than-expected fuel economy. The Super Long-Slide second-row seats, which impressed us so much during the comparison test, continued to do so when pressed into more demanding service. We slid one side as far forward as the infant car seat would allow, therefore freeing up as much room as possible for luggage stacked atop the third row's folded 40-split portion. We then slid the other second-row captain's chair rearwards so my wife could easily attend to the screaming baby while still leaving enough room for grandma riding in the caboose. By the way, she reported being very comfortable back there with absolutely no complaints. No mention of the seat bottom, which I found to be a little shallow relative to the Pacifica's. 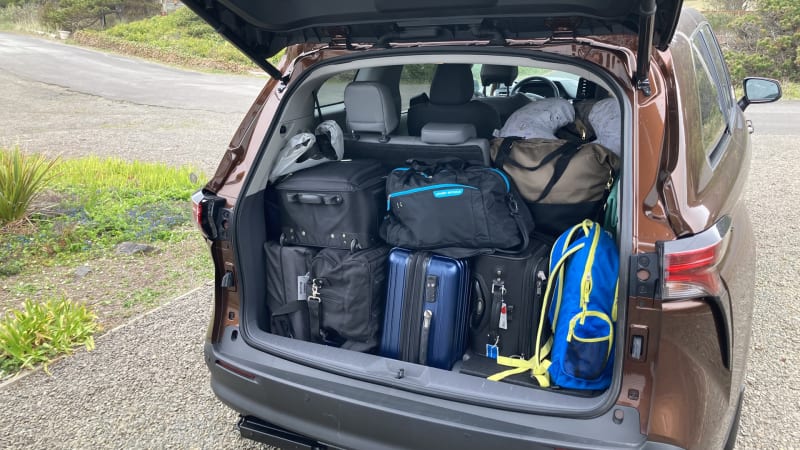 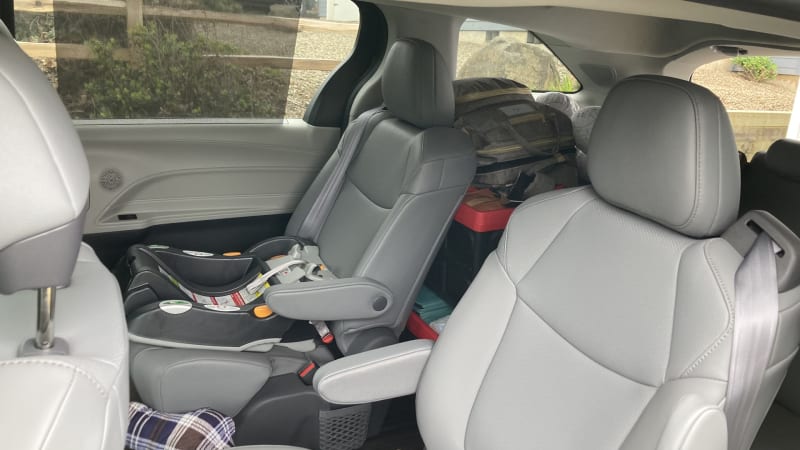 The in-car storage also proved just as useful as expected. The unique mesh cupholder on each captain's chair could hold the (entirely ineffective) baby sound machine. The giant under-console storage area was big enough to fit my entire computer backpack, while the covered center console bin could swallow my camera bag and two sunglasses cases.

It isn't all roses inside, however. This test van was the XLE trim, which is three rungs down the trim ladder from the Platinum driven during the comparison test and in John Snyder's Sienna first drive. There is a distinct reduction in materials quality. Specifically, instead of padded, leather-look vinyl stitched across the dash in the Platinum, Limited and XSE, the XLE dash is textured hard plastic. The doors lose the stitched vinyl, too, but the upper trim remains soft-ish. The edges of the center console do retain the leather-like vinyl trim, but between it is an unusual rust-colored plastic trim with embossed lines and subtle metallic specks. It's bizarre, and although possibly better than overtly fake wood, it looks cheap. You can see the differences in the side-by-side gallery below.

All of which is bad considering this Sienna XLE AWD with the Plus package and rear-seat entertainment system stickered for $48,087. The Sienna Platinum tested during the comparison test was $53,666 (add a shockingly reasonable $210 for AWD). Perhaps its handful of extra features and some bits of padded vinyl aren't worth a $5,600 price premium, but the fact remains that our XLE test van's interior certainly didn't look or feel like it carried a sticker approaching $50,000. The Platinum and the Limited trim do, especially since they have real leather. The XLE has SofTex vinyl, which admittedly could be seen as a benefit to some due to its superior wear and lack of cow murder. Otherwise, the main takeaway was the driving experience. Once again, the new Sienna's steering and handling in general proved to be a cut above the rest. Fun this minivan is not, but it's also not a giant inert marshmallow that makes you rue the day you had a child (previously-mentioned child screaming for two hours was making enough of a case there).

The power, or lack thereof, is likely to be the biggest hangup. It has 245 horsepower, which compares to 280 hp in the Odyssey, 287 in the V6 Pacifica and 290 in the Carnival. That's a significant deficiency and you definitely notice it when you put your foot down. The Toyota hybrid system's electronically controlled continuously variable transmission doesn't help the situation, as it vociferously moos when you're laying into the throttle.

That said, this is more a matter of the Sienna having merely sufficient power while the others have a wealth of it. Despite being fully loaded, the Sienna didn't feel strained and the engine wasn't consistently revving its guts out, even on the many hills crested during the two round-trip journeys it made between Portland and the Oregon Coast. Also, the electric motors on each axle provide a substantial wallop of smooth torque. This is especially the case while maintaining speed on the highway, which is usually when a non-hybrid CVT can annoy by constantly yo-yo-ing back and forth between barely off-idle and a much louder higher rev range.

In the end, would you rather have a 290-horsepower, V6-powered Carnival when you need to blow past a Subaru Outback doing 45 in a 55 while your baby is screaming? I know I would. However, would I rather have that or 39.4 mpg and hundreds of extra dollars in my pocket every year? Again, easy choice, I'll take the hybrid, please – though I'd probably spend a few bucks extra per month for a Limited or Platinum.