It doesn't feel as affordable as it is The Chevy Corvette C8 is just an awesome machine. It’s a rocket with its rippling, nearly 500-horsepower V8. The chassis is beautifully balanced and communicative. Its mid-engine wouldn’t look out of place next to a Ferrari or Lamborghini. And of course, it can all be had for well under $100,000. But one part of the new Corvette’s excellence that’s sometimes overshadowed by all of this is the interior, which is not only functional, but really helps sell the car’s supercar vibe and helps it feel like something really special.

Before digging into the whole experience, take note that this particular example is a mid-range Corvette 2LT. The trim itself doesn’t change much about the cockpit save for adding heating and ventilation to the seats, a Bose sound system and heated steering wheel. Also, while this car was optioned up to $82,250, most of that was in performance upgrades. The only optional interior items added were the GT2 seats, faux suede steering wheel and red seat belts, the latter two are available on the base 1LT, and the extra-sporty Competition Sport bucket seats. As such, this is a fairly representative example of a Corvette interior. With that out of the way, let’s step inside.

When you take a seat, you immediately notice how different the view out is compared to any previous Corvette. The nose is short and low, giving you a widescreen perspective of the road ahead. Looking back, you look right into the engine compartment, and even though you can’t see the engine because of its small size and low position, it’s exciting to look back and know what’s lurking inside. On cold days, you’ll see the heat waves rising up. It does share a characteristic with traditional supercars that’s not so great, though: poor rear visibility. The rear sail panels make changing lanes harrowing. If you're getting a 2LT or above, the good news is that blind-spot monitoring is standard. If you're getting a 1LT, it's not available at all, which seems like a poor move by Chevrolet. 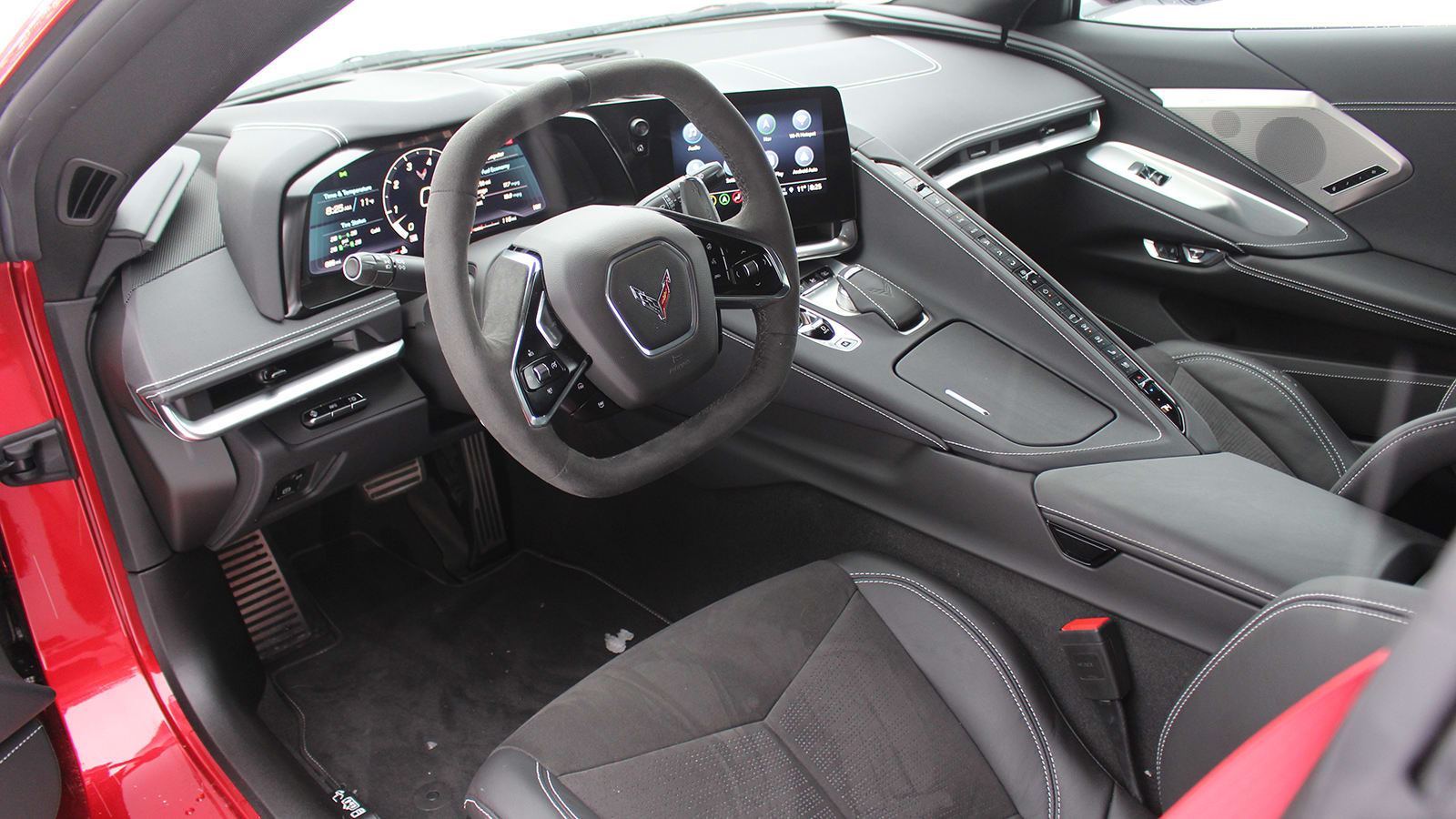 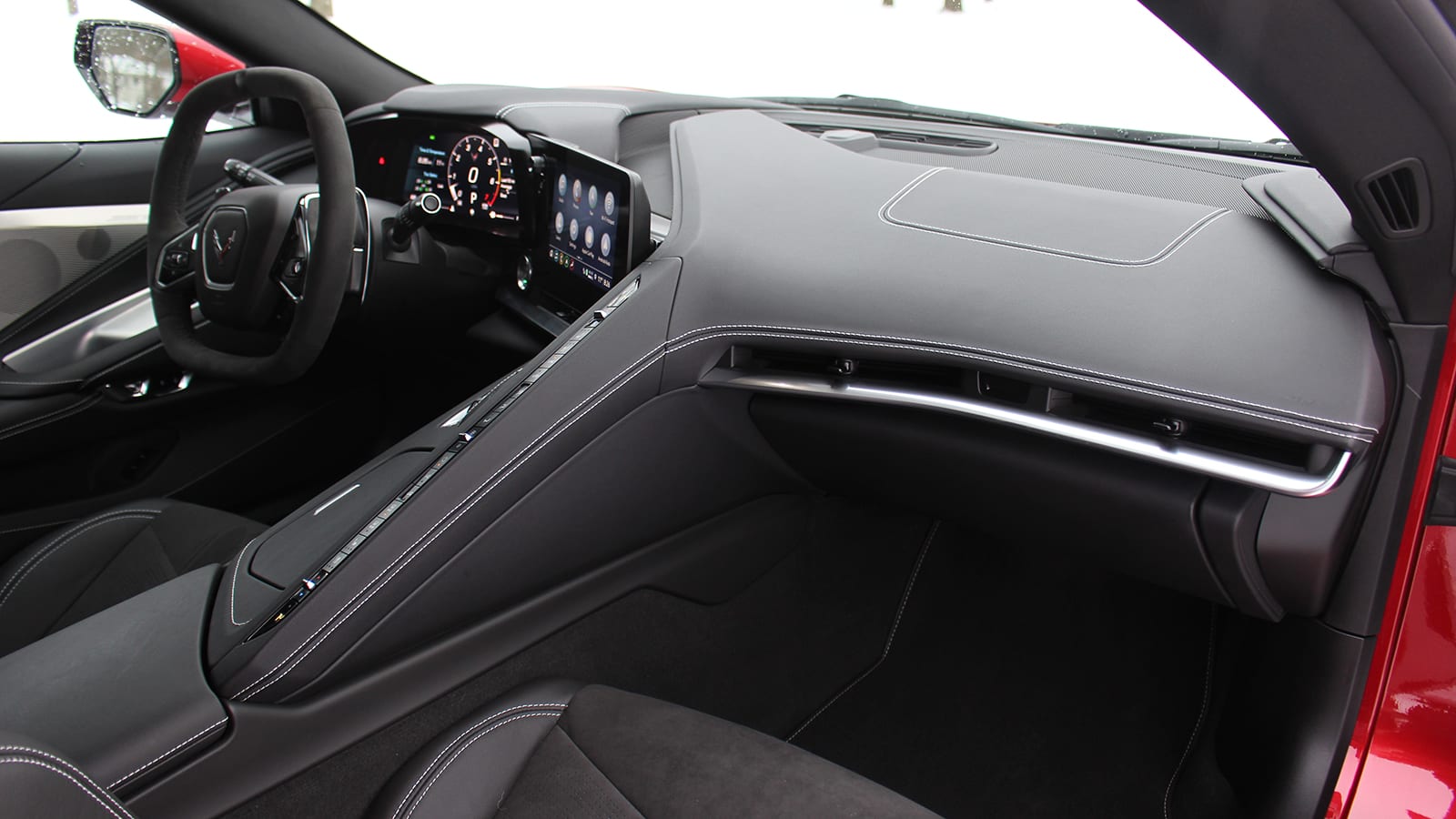 Once you’ve stopped marveling at the novel view, you’ll notice the rest of the interior, which is arguably the best to grace America’s quintessential sports car. Panel gaps are super tight, edges are crisp, but most of all, it’s a unique and stylish design. Everything wraps around the driver with the infotainment screen and cascade of buttons all angled in that direction. Add in their relatively high position, and it makes everything easy to see and reach; at least for the driver. The passenger won’t really be able to access anything but their air vent controls.

Contrast stitching in the panels adds a bit of detail and style, and the bits of real aluminum trim on the doors feel great. It’s somewhat disappointing to discover that the stitched panels are actually all plastic rather than wrapped in leather or leatherette, but they look and feel good enough it’s not hard to forgive. And if it does bother you enough, there are higher-end interior options that upholster parts of the dash. 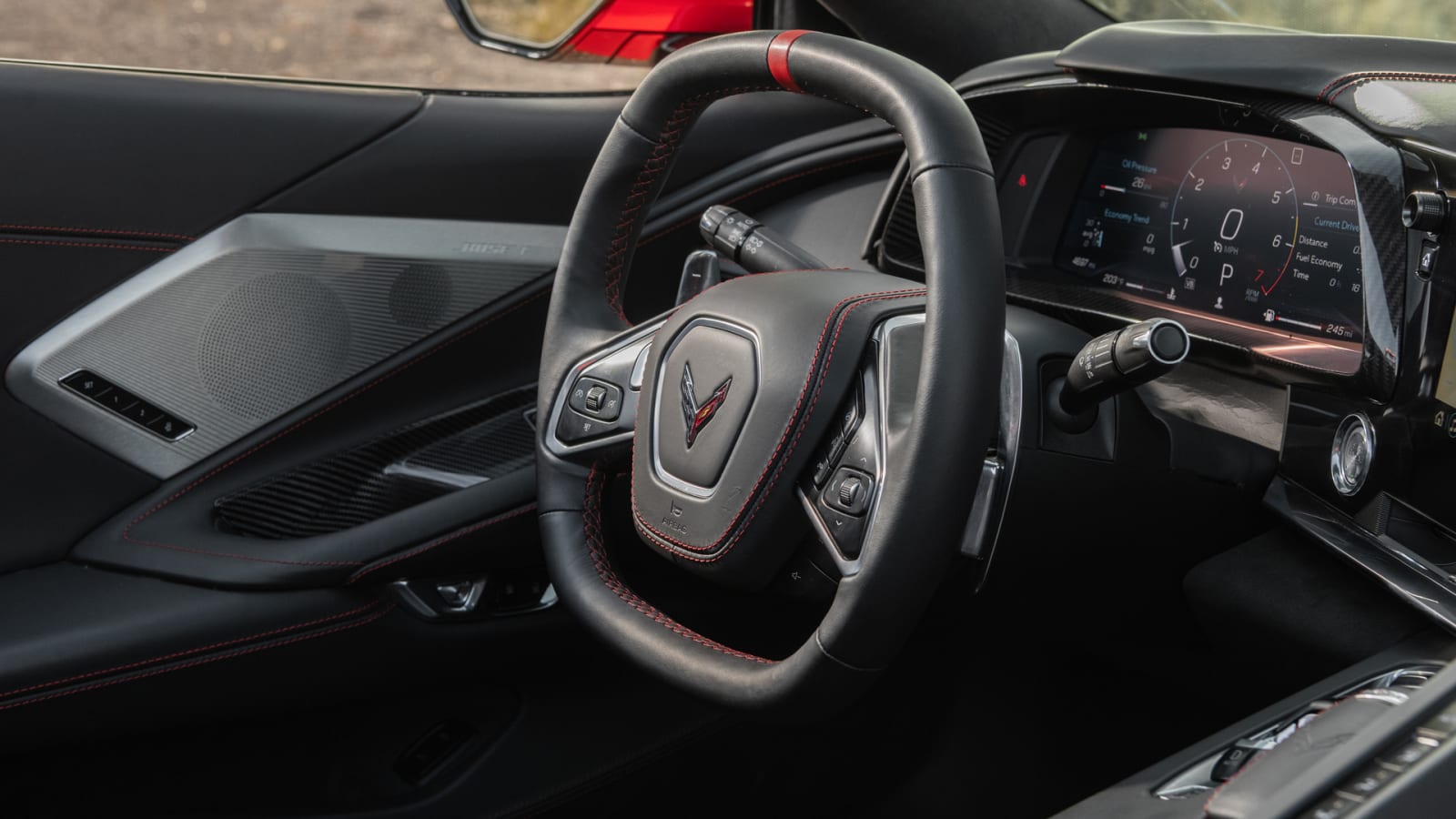 Besides, you probably won’t be caressing the interior panels much as you’ll have your hands on the controls, and mainly the steering wheel. This is the interior's most striking piece due to its square shape. It looks strange, but it’s been shaped for your hands to drop right into the 9 and 3 o’clock positions almost like a flight yoke. It makes you feel like you’re in the seat of a fighter jet. But, unlike the controversial new "wheel" design from a certain EV manufacturer, the upper and lower sections mean that it’s still reasonably useful for around town, hand-over-hand turns.

Admittedly, the Autoblog staff's opinions are divided on this wheel. Some dislike the spokes being lower than 9 and 3 o'clock, while the flat top and bottom don't allow for much change in hand position, be it for shuffle steering or for a more relaxed grip. Other found the shift paddles to be positioned a little low to operate comfortably despite a nice, confident action.

Their objections duly noted, I shall return to my praise for the thing by noted the cool, handy button with a "Z" on it. Named after Corvette shepherd Zora Arkus Duntov, this button activates the Z-Mode, a user-customizable drive mode without having to use the slightly stiff drive mode selector. 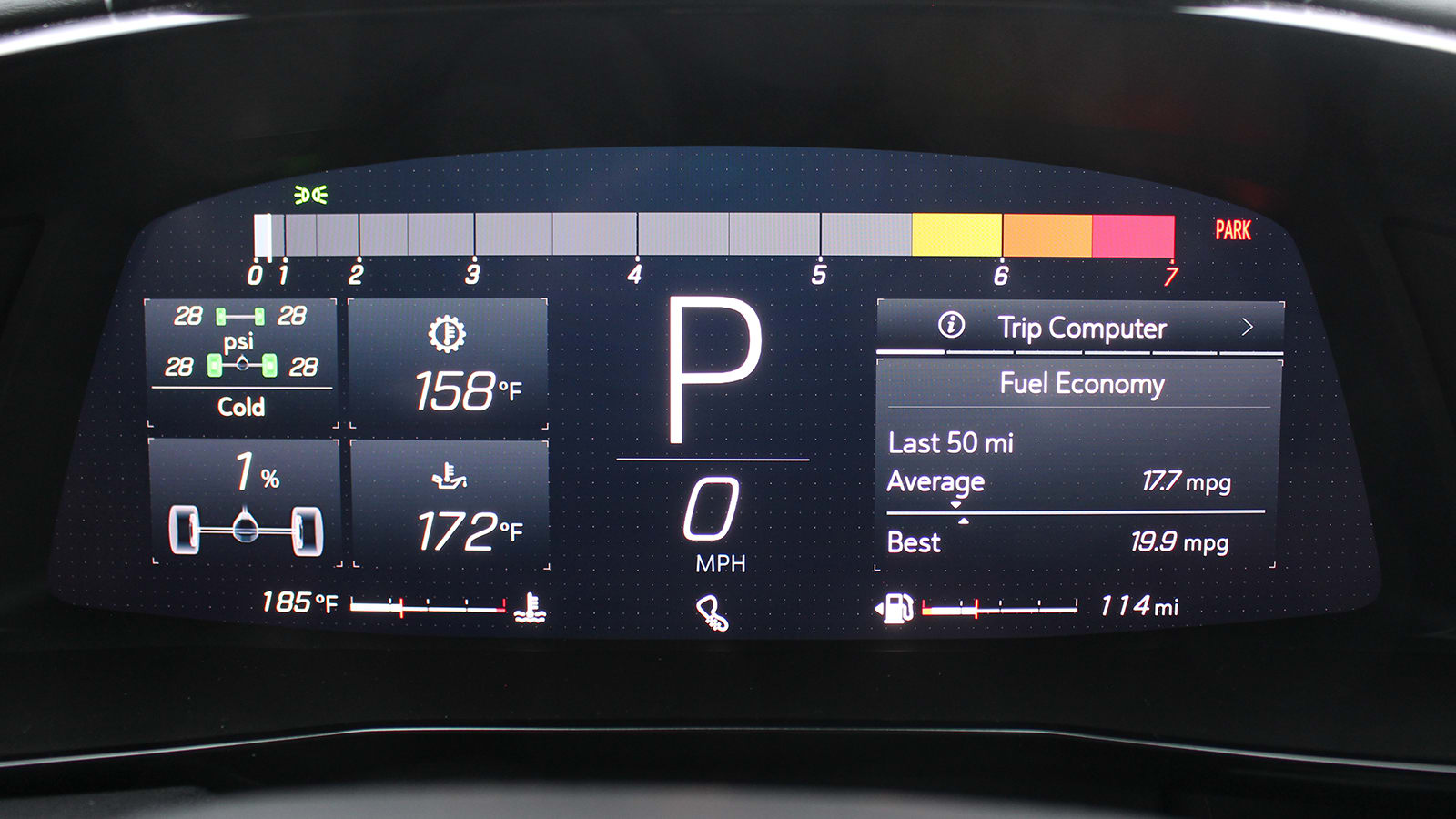 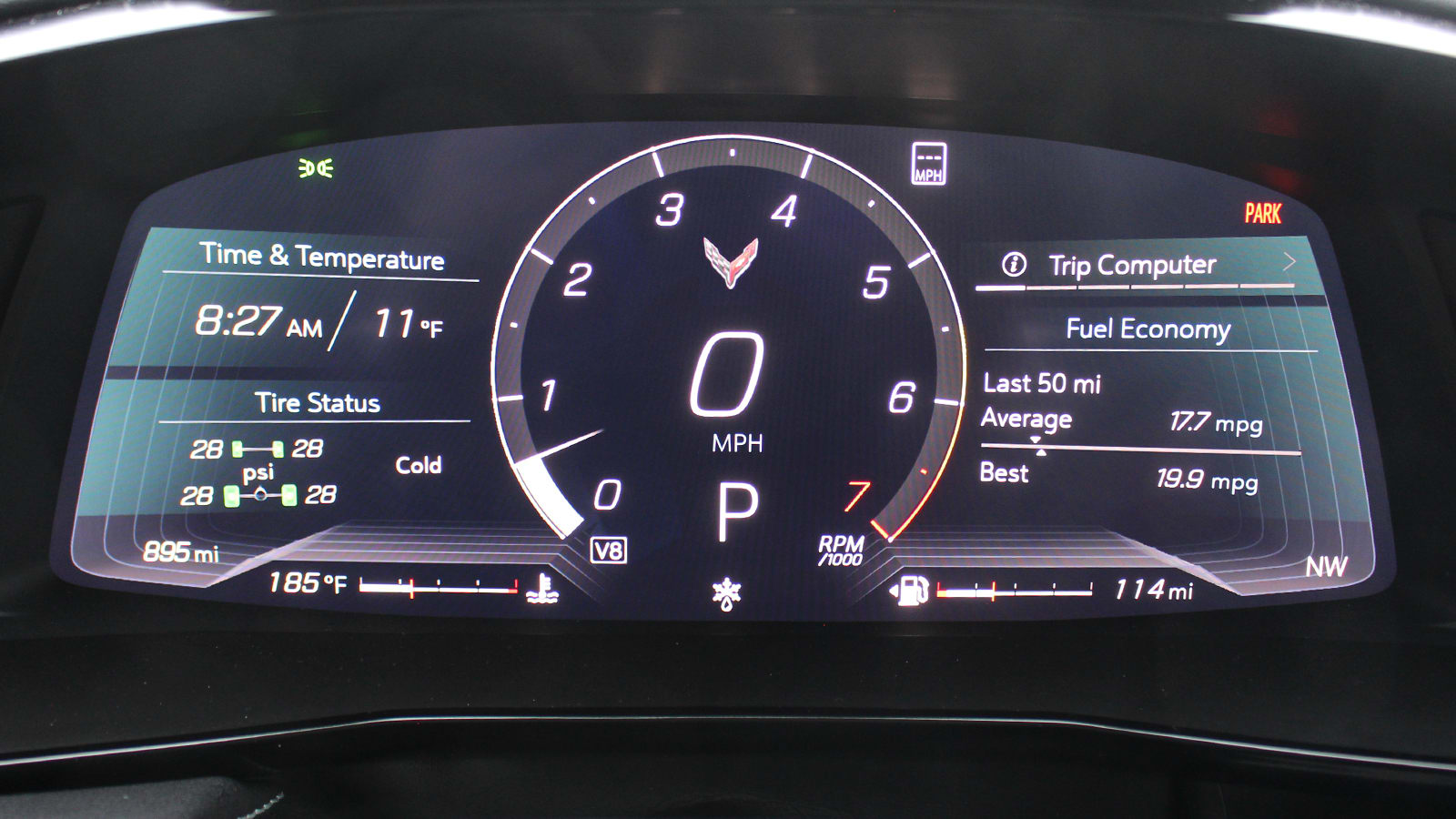 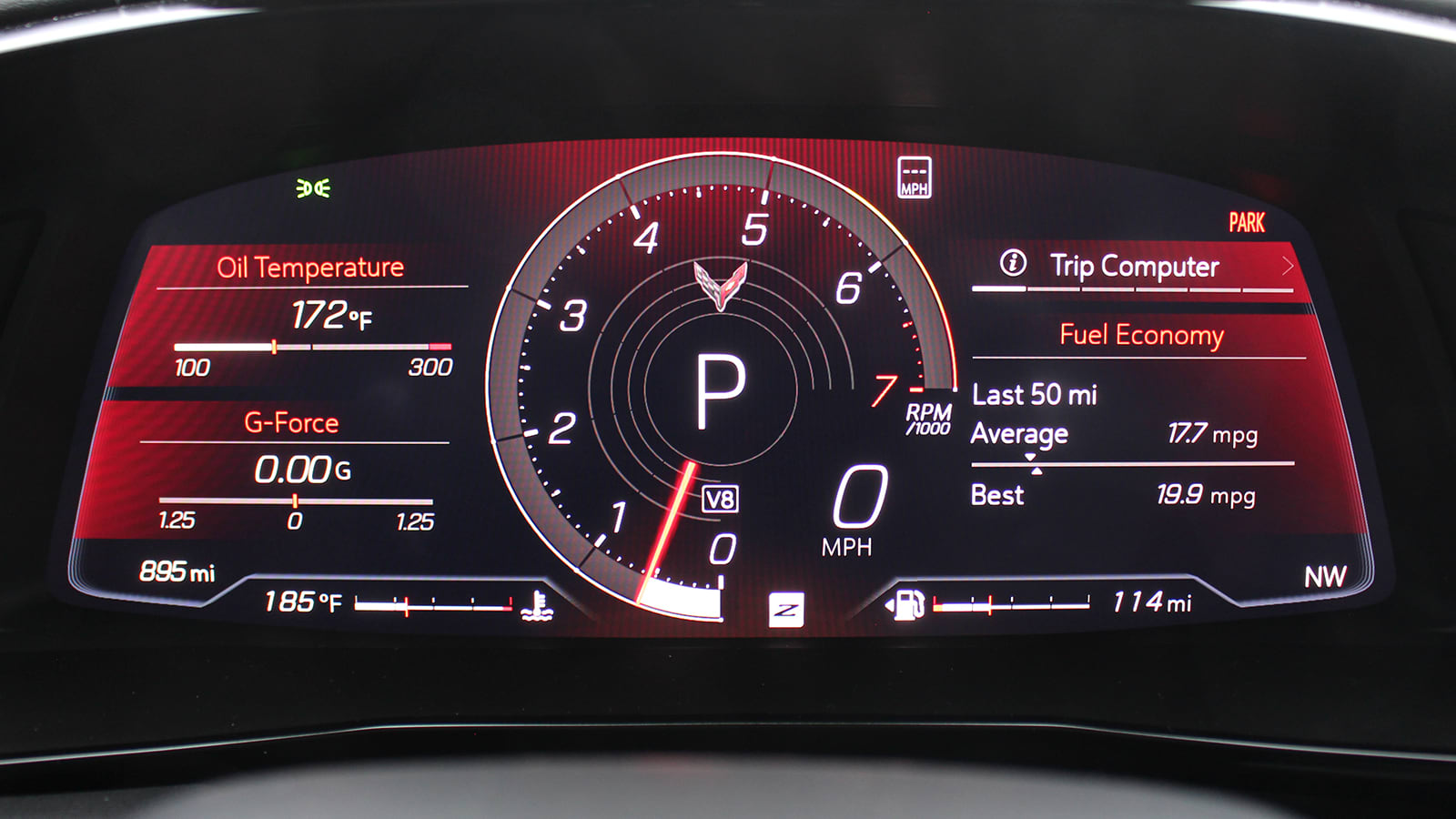 Behind the wheel is an instrument panel screen that's pleasingly sharp and bright. It also features clear and simple graphics that aren’t too flashy. In Tour mode, they’re mostly a grayscale, and Sport mode changes the background to red. In Track mode, everything rearranges and the tachometer becomes a no-frills black, yellow and red rectangle for revs. Other pertinent information is placed in plain gray boxes. They’re simple, but elegant, and most importantly, easy to read at a glance. The controls on the center console are pretty simple, too. The aforementioned drive mode selector is a stylish wheel with a leather palm rest, which would be more useful if the dial were easier to turn. The other buttons and switches feel great, though, with weighty, positive clicks.

We wrap things up with the seats. The Corvette we had featured the optional GT2 bucket seats that provide good support and the bolsters hold you in place. They look cool, too, and if you’re on the larger side, you can fit without being too pinched. The fixed rear head restraint is a bit bothersome if you’re tall, though. The base of it sits low enough that it pokes you in the top of your back between the shoulder blades. As such, you may want to stick with the standard seats. On the other hand, if you want seats that hug you even more, there are Competiton Sport seats available.

All around, the C8 Corvette’s interior absolutely sells the fact that it’s a true supercar. It has the look and position, and it even does so without feeling as budget-priced as the car actually is. It’s just one more way it’s an incredible machine.

Correction: A couple details about feature availability were incorrect, specifically regarding seat options and blind-spot monitoring. These details have been updated with the correct information in the text.