You’re the type who loves a fast, nimble machine. You relish the moments when the world’s worrisome hum fades away into the zen rhythm of the road or trail. You live for those adrenalized seconds when skill and nerve are tested on a perfectly cambered turn.

Then get yourself a bicycle.

Into this age of COVID comes a bright spot. The roads are emptier than usual, social distancing is still vitally important, and the sun is out. There’s never been a better time to join those odd obsessives who live for their carbon-fiber machines.

Bicycling is having a moment. More than 80% of Americans think cycling is currently safer than public transportation, according to a survey sponsored by Trek. Sales of adult bikes were up more than 120% in March, and according to WinterGreen Research, the $54 billion cycling market worldwide is likely to see increases of 35% in road bikes this year.

To put the explosion in perspective, I turned to a legend who’s seen all of cycling’s ebbs and flows: Mike Sinyard, the founder of Specialized Bicycle Components. "I’ve always believed bikes can change lives, and it’s inspiring to see cycling booming," he said. “New riders of all kinds are in the saddle, and that’s amazing." 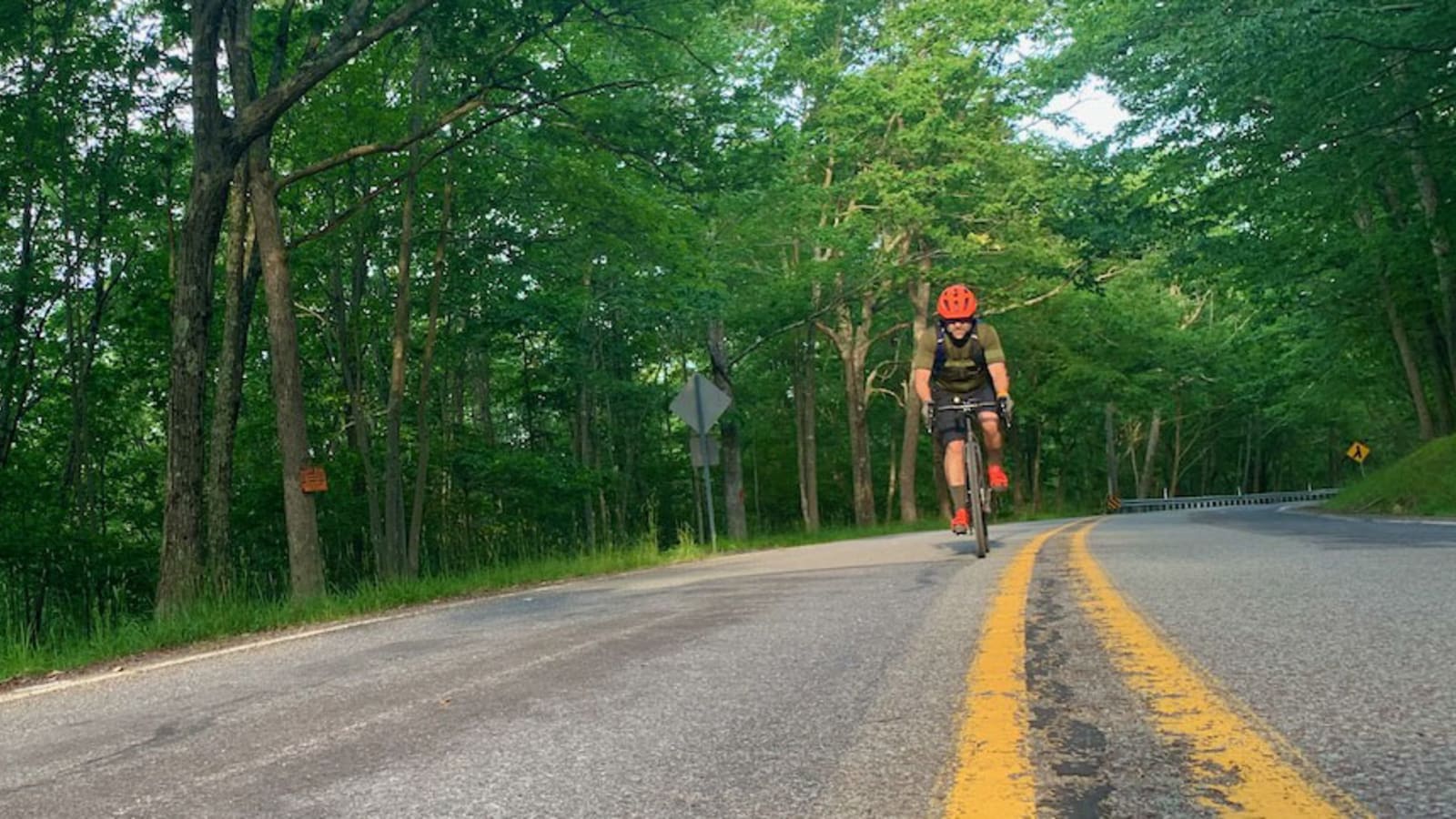 I too have caught biking fever. During these past long months, I’ve vented frustrations by grinding out mile after mile, far from people. I now look forward to a day in the saddle in the same way I anticipate an afternoon zinging down back roads in a Porsche Cayman.

I’ve always been equally keen to test limits on the racetrack, the Rubicon, and a rally course. So too goes biking. A road bike allows for explorations in a 50-mile range and 50-mph descents. A mountain bike takes you into deep woods and steamrolling over obstacles. A gravel bike is the all-rounder, opening up beaten asphalt and logging roads to exploration and rooster-tailing through fast corners.

It’s led to a realization: Cyclists and car enthusiasts aren’t on the opposite sides of the same coin — they share the same side of that coin. What other group of people are fanatical about carbon fiber and stiffness, performance data, great roads, and hanging out with people who share those arcane passions? (Yes, motorcycle riders can be thrown in there, too.)

A quick word about community. My local bike shop, Pocono Bike Company, has been a great source of advice on riding and gear. Its generous owners have shown me their secret mountain-bike trails and included me on fast group rides on lonesome backroads. Having that group of people undoubtedly tipped me further into the obsession. Just like cars, it’s great fun to talk bikes. Find yourself a local shop and ingratiate yourself. 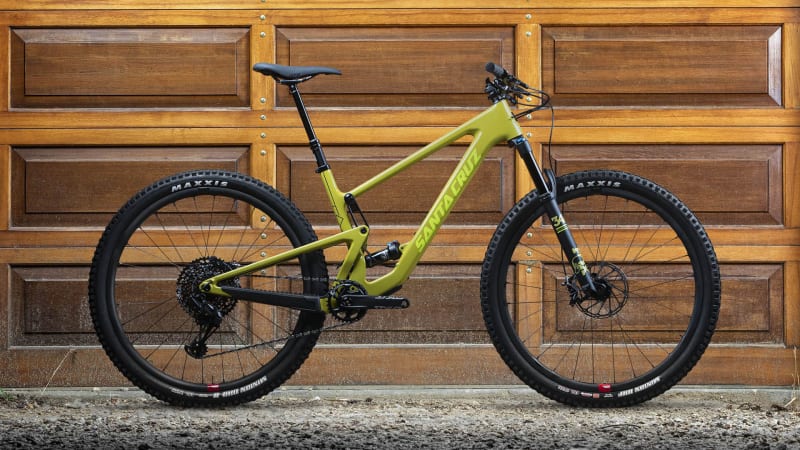 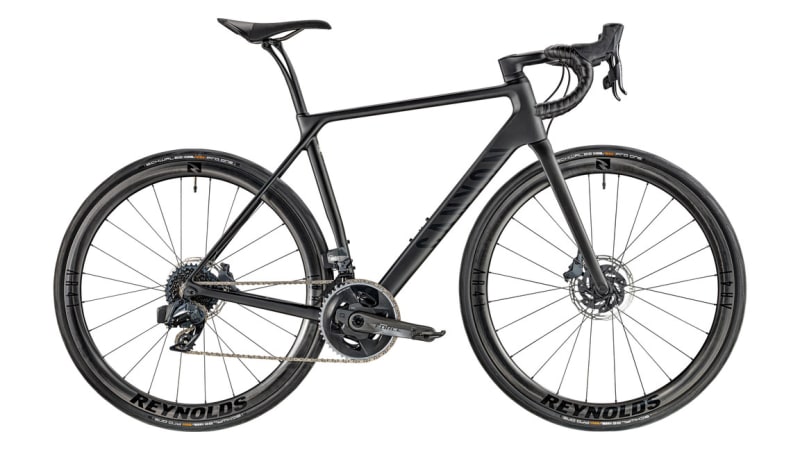 And, yes, the machines. The glorious machines. After two decades of testing press cars, I’m now testing bikes as well. There’s the Canyon Endurace CF SLX Disc ETAP road bike, above right, a gorgeous arc of carbon fiber akin to a Cayman in terms of speed and compliance, built for twisting ribbons of asphalt. I’m in full-blown love with it.

And the Santa Cruz Tallboy, above left, a full-suspension cross-country mountain bike that bombs down rocky declines with mad abandon. Like a Jeep Wrangler Rubicon, it’s overbuilt for the kind of trails that most riders will actually take it on but is truly capable of torturous terrain.

Then, the other day, a box arrived from Denver-based Alchemy. The company has been hand-building carbon fiber frames for a dozen years. The 30-hour carbon build starts with 500 pieces of pre-preg carbon sheets woven with an eye to lightness and stiffness. The goal is that elusive magical feeling of a frame that is alive underneath you — but not molar-chattering so. (Alchemy also makes bikes of titanium.)

Inside was a Ronin gravel bike, a model that starts around $6,500 and goes up to $10,500. Similar to a car, a buyer starts with the basic frame and then decides on options. 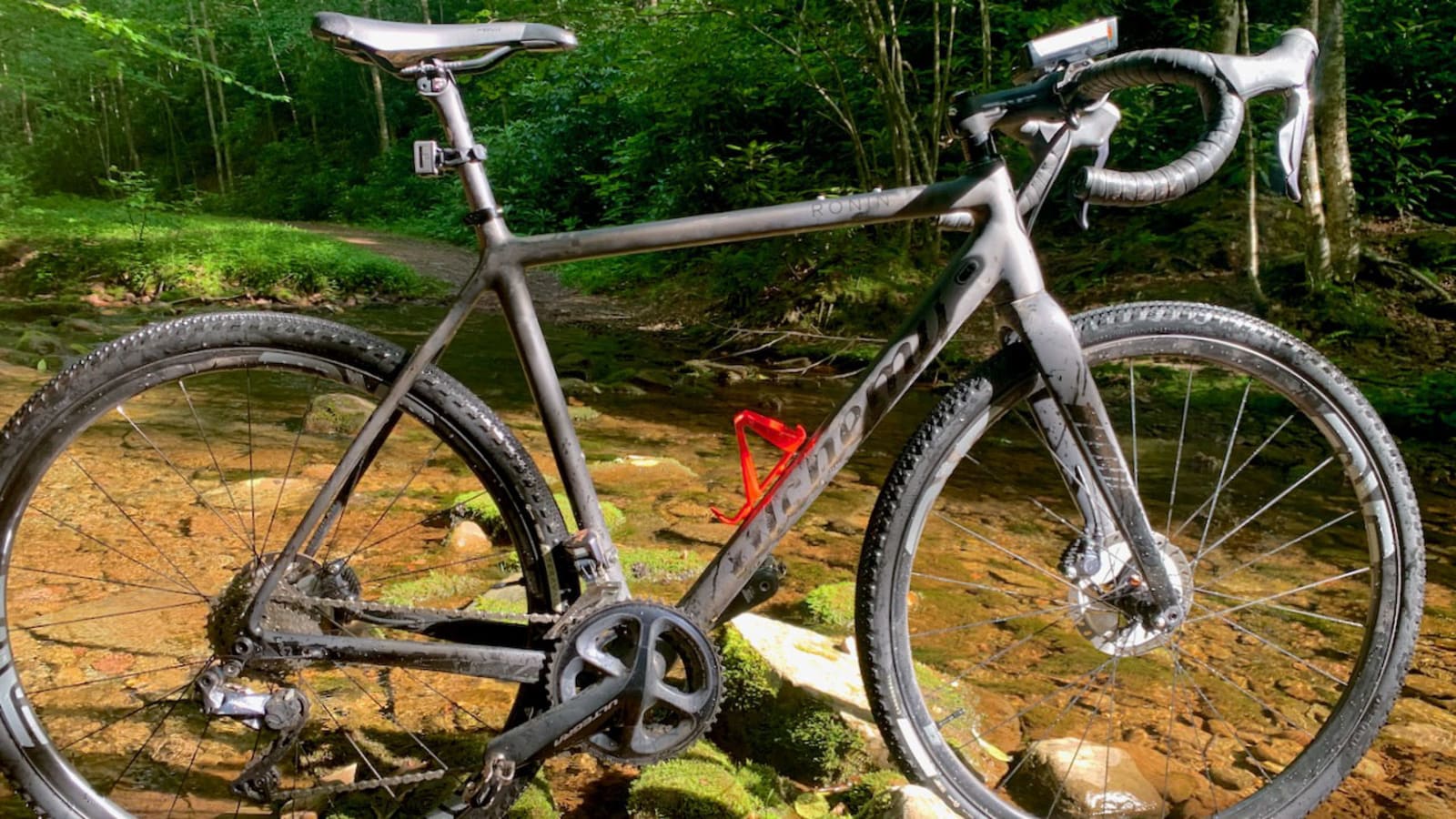 In the cycling world, the most important option is the quality level of the groupset — the combination of parts that make up the drivetrain, shifters and brakes. My Ronin was equipped with a high-end Shimano Ultegra set, semi-beefy 700x42 tires, and disc brakes.

Gravel bikes have the same basic architecture of a road bike, and similarly lack suspensions. But cleverly constructed frames and wider tires mean they can handle asphalt, dirt and gravel — even some rock gardens — as well as the potholes you’ll find on city streets from New York to Michigan.

The Ronin’s groupset has electronic shifters, a technological (but not cheap) godsend. It’s akin to the difference between a manual gearbox and a dual-clutch transmission  — only cable shifters have none of the benefits or romance of a manual. Once you go electronic, it’s hard to go back. Between the two major brands, Shimano and SRAM, I prefer the straightforward shifting pattern and surety of the U.S.-based SRAM.

Other tech I’ve learned to love: The WaveCel helmet, which uses a collapsible cell structure to absorb impacts and help prevent concussions in case of a crash. All of the group riders use both front-facing daytime lights and blinking red taillights from Bontrager. In terms of safety, the daytime running lights are a gamechanger. Cars actually see you and react. I’ll never ride without them now, and am buying a small set of LED lights for my son’s 24-inch bike, too.

Some riders also use Garmin’s Varia, a rear-facing radar similar to a car’s LIDAR alert system, that tells you when a car is approaching from behind. 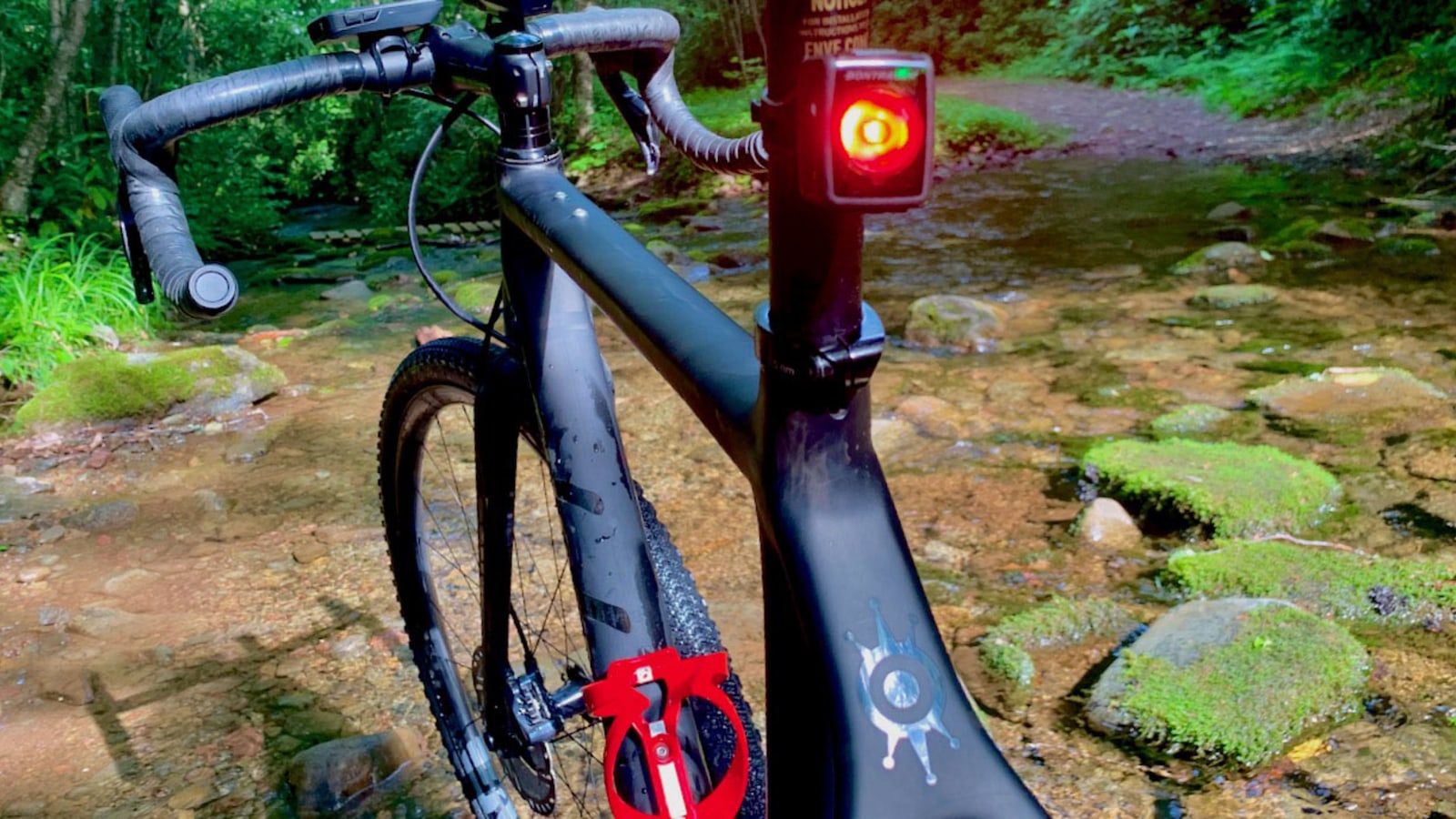 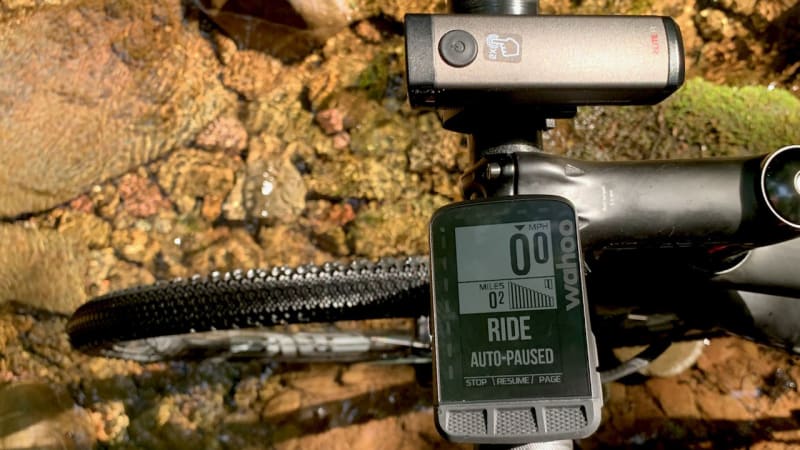 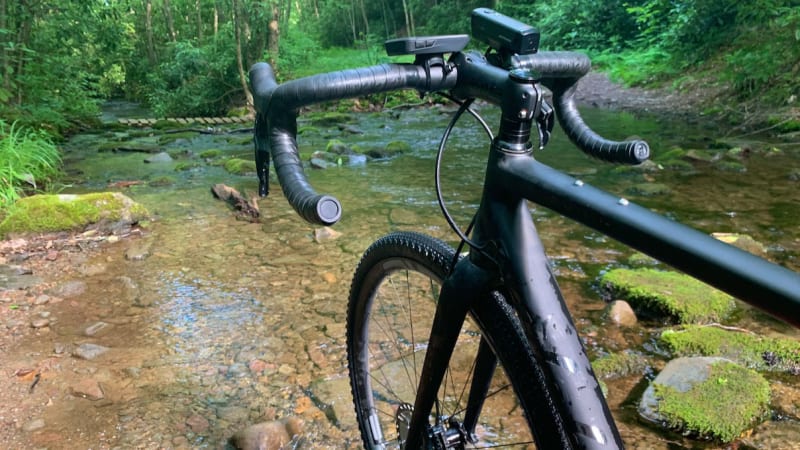 My bike computer, the Wahoo Elemnt Roam, functions as a turn-by-turn nav system. It also clocks top speeds, gauges how much power is generated at the pedals, and even hooks into the Strava app so you can gauge performance on certain challenging roads in real time. Added up, it is transformative.

But some days I leave most of it at home, opting for an analog ride.

Because, ultimately, it’s about the road. The sense of exploration, of speed, of feeling the bike compress underneath you through a banked turn.

Not long ago, friends and I had hiked up a steep, rock-strewn logging road in the Pocono mountains. A nice enough walk, but an even better, challenging ride. So, on another day three of us tried it — the others on traditional mountain bikes, and me on my lighter, non-suspension, Alchemy Ronin.

We parked at a trailhead, and almost immediately rode through an ankle-high stream. The Ronin sluiced through gamely. Big rocks turn the front wheel easily, unlike the knobby 29-inchers on the Tallboy, but the light frame allows artful dodging.

Then we ground up a steep, torturous ascent, staying seated so our rear wheels didn’t scrub out. Eventually the hill evened out and the Ronin picked up speed, gliding over terrain in the same magical way a rally car hovers over bumps at the right velocity. 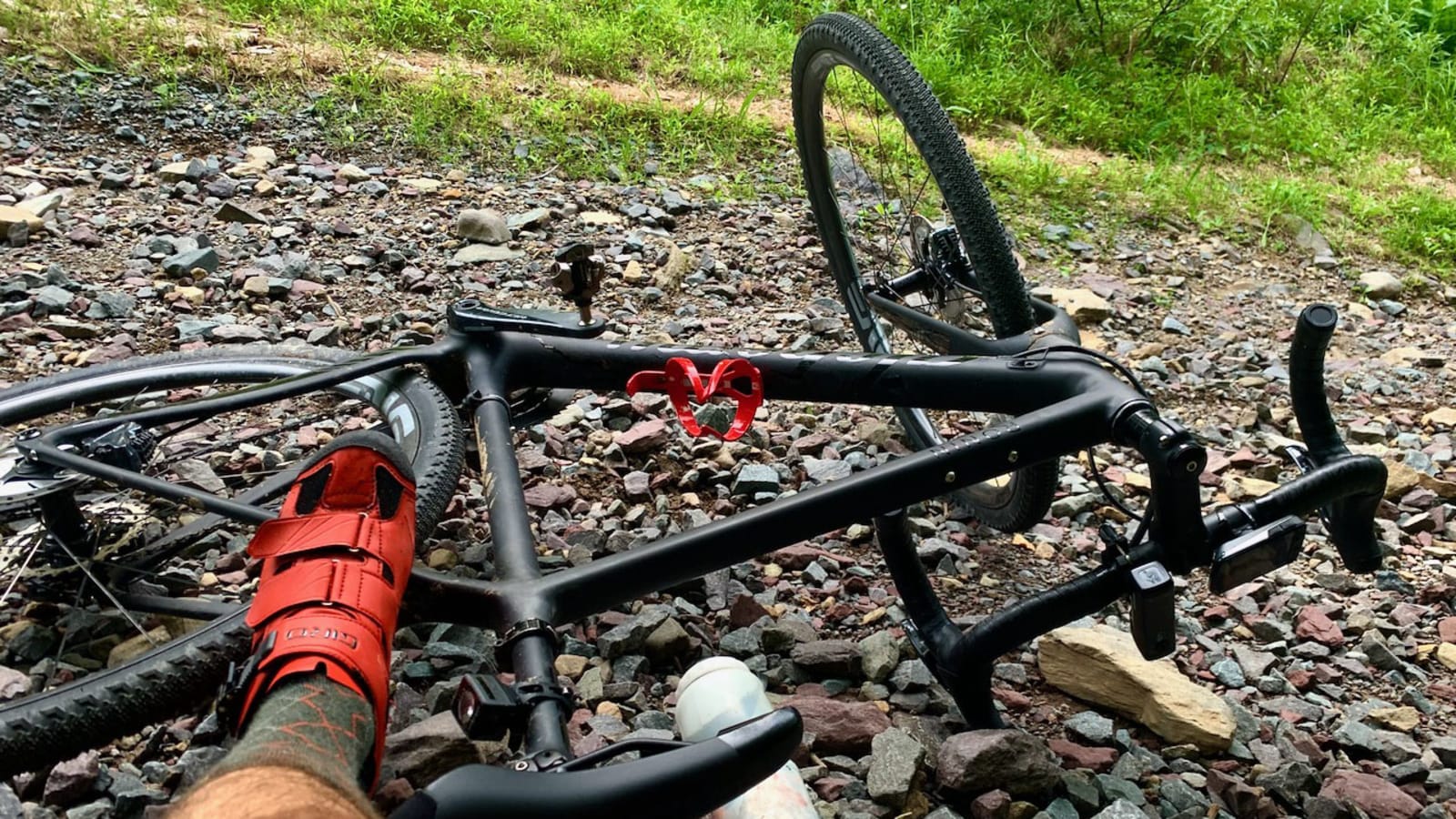 Another stream crossing and then a vicious hill littered with rocks the size of my head. We reached a cell-phone tower and turned around. I settled into the “drops” of my handlebars, lowering the overall center of gravity. But no ride is a Harper ride without a crash, sadly, and I hit a rock and went down in a heap. No blood (or not much anyway), and eventually we turned onto an asphalt road. Here, again, the Ronin took provenance, doing an impression of a speedy road bike.

The road was utterly empty. Keeping out an eye for kamikaze deer, we went for it, pushing hard as the summer sun filtered through the trees and a flower-scented wind fluttered in our faces.

A day out with friends, away from the house and the computer and your worries. Pushing you and your machine. I bet that sounds familiar, right?

Featured GalleryBiking in the Age of COVID