ZWICKAU, Germany – We tried everywhere: Peek under the hood and under the big front mask, even scroll through the infotainment system. But alas, confirmation was nowhere to be found: We wanted to confirm the rumor that the next-gen BMW M3 and M4 would have an even more provocative, vertical front grille than the new 4 Series. Though BMW allowed us to drive them, it took very good care not to reveal what could be the most controversial part of its next M models.

The M3 originally debuted on the second-gen, E30 3 Series in 1985 – as a two-door model. The following E36 initially launched as a coupe, but was followed by an M3 sedan and convertible models. The sedan skipped the iconic E46 generation, but returned for the V8-powered E90. Then, for the last model generation launched for 2014, everything changed. The coupe and convertible were split off and received the M4 moniker, leaving the sedan as the sole M3. The renaming exercise caused raised eyebrows in the enthusiast community, which was eventually able to process the occurrence with loyalty intact. The same thing will probably happen with the new grille, which — as other sources have reliably confirmed — will not only adopt a vertical shape on both the M3 and M4, but in fact be even more aggressive than what's seen on the 4 Series. However, the visual differences between the M3/M4 and their conventional siblings won't entirely be determined by style. There are functional air breathers at the front, a slightly raised front hood, wide front and rear fenders, a Gurney-style rear spoiler and, true to M car tradition, four very prominent exhaust pipes. As the front fender was completely taped up, it's assumed any air vents that may appear behind the front axle will be of the non-functional variety. 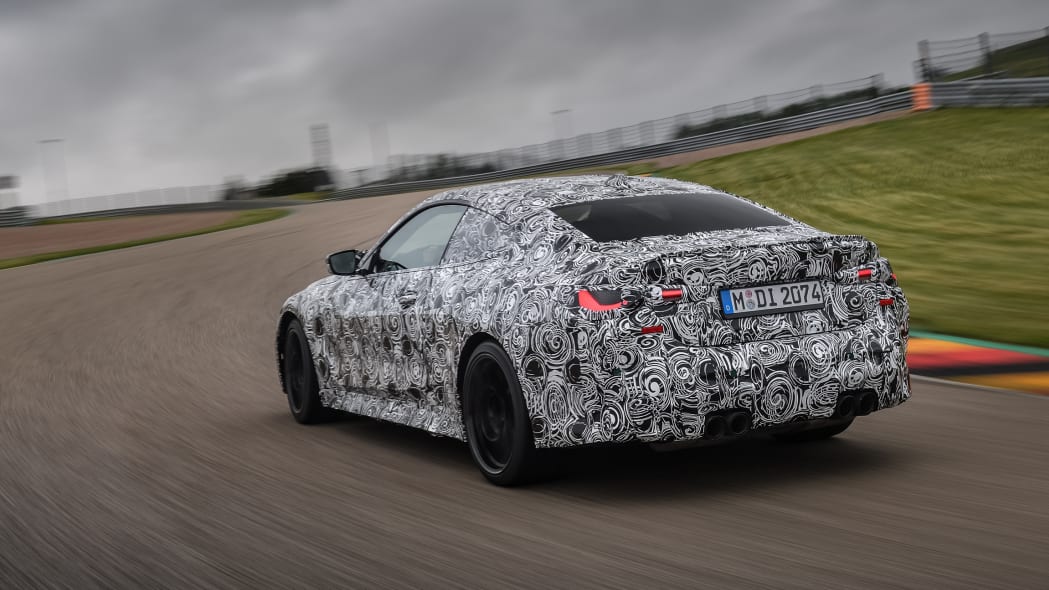 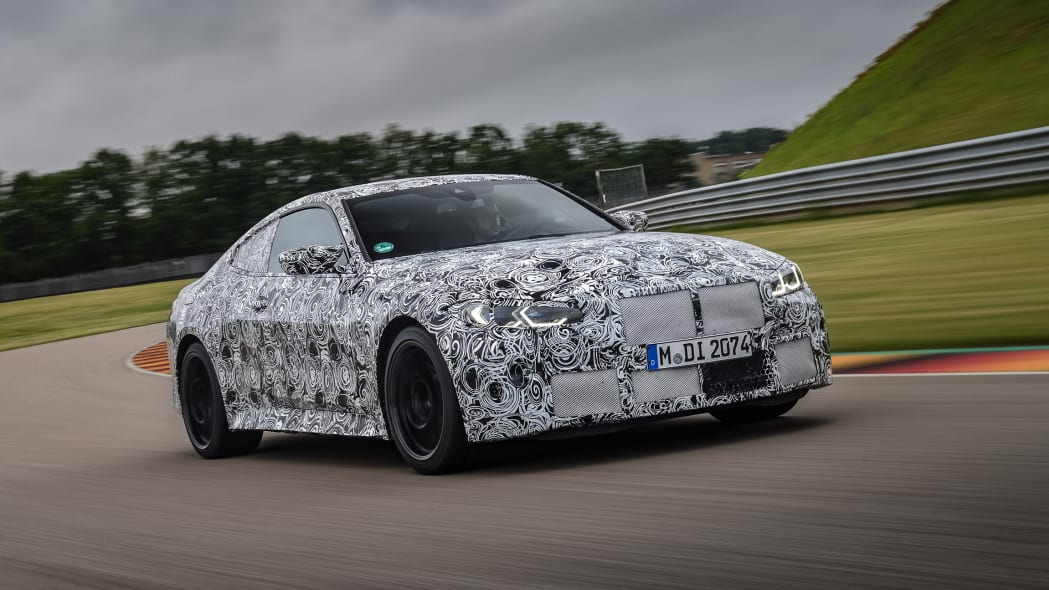 Just like previous generations, the hardware is tweaked sharply for supreme performance both off and on the track. Besides their unique chassis, they feature a different steering system and, of course, vastly more powerful engines that maintain only a loose relationship with the B58 modular engine on which they are based. The M3/M4 engine, dubbed S58, made its first appearance in the X3 M and X4 M. The 3.0-liter twin-turbocharged inline-six makes 473 horsepower in base trim and 503 horsepower when the Competition package is specified.

The two power levels are carried over to the M3 and M4, with one very important difference: The 473-hp version is fitted solely with a six-speed manual transmission, which will once again feature an auto rev-matching system, but thankfully, you no longer have to disable stability control to turn it off. Meanwhile, the 503-hp Competition model is exclusively fitted with an eight-speed torque-converter automatic by ZF. Both models are rear-wheel-drive only, but down the road, the automatic Competition model will become available with a heavily rear-biased all-wheel-drive system. 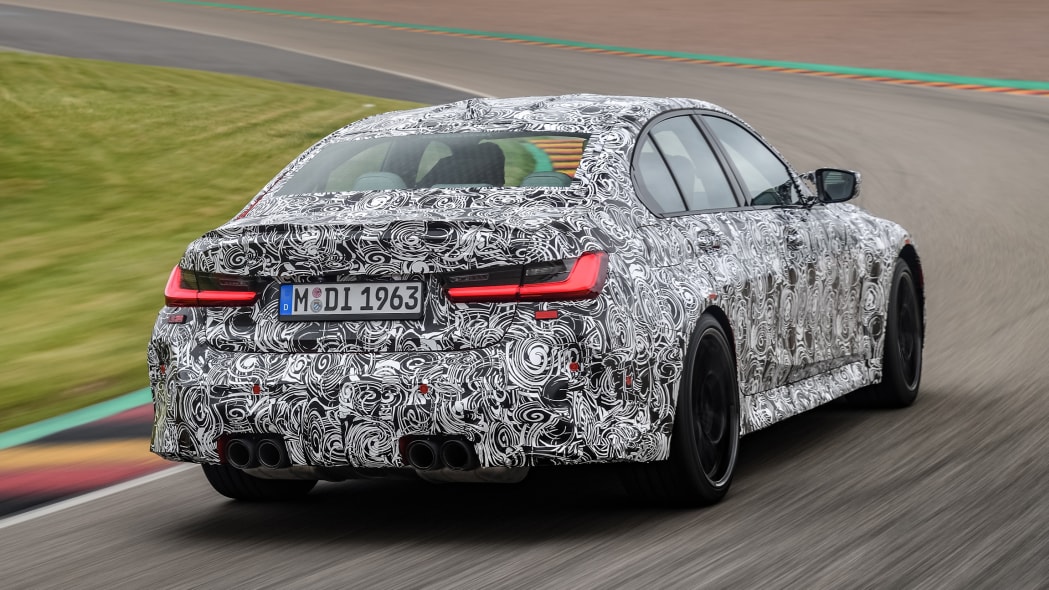 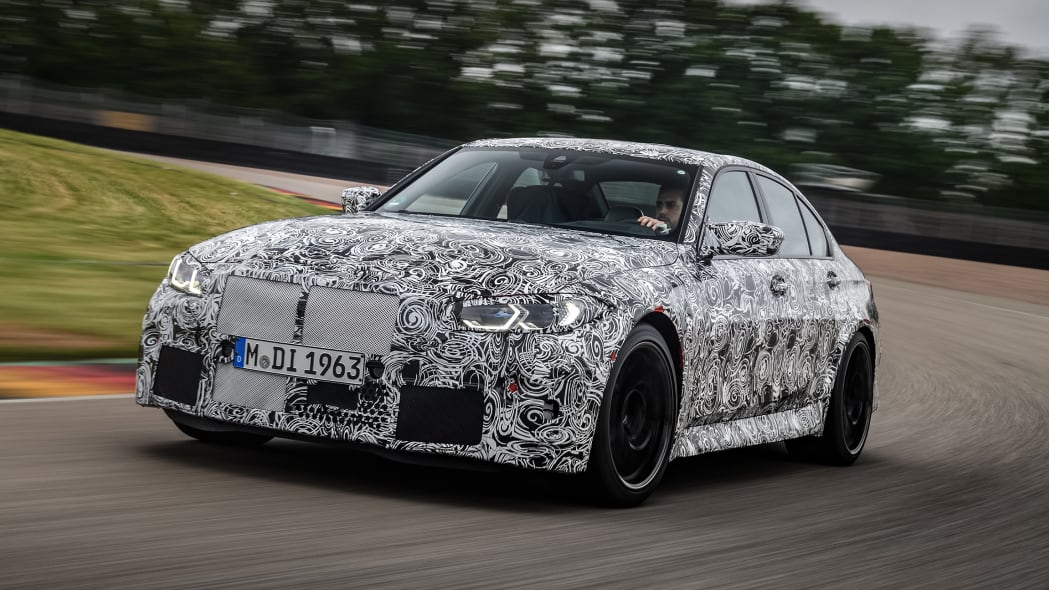 Inside, the M3 and M4 mirror the regular 3 and 4 Series, but the front seats offer far more lateral support, the steering wheel is ultra-grippy and the instruments feature M-specific design. The rear armrest, standard on the regular 3 Series, is gone on the M3, presumably to shave off a few pounds.

After a few laps in the previous-generation M4, we take to the Sachsenring racetrack in a new M3, letting the powertrain and chassis work their magic. The engine fires up with a bark, and it revs up freely, never letting off up to well over 7,000 rpm. The transmission is an absolute delight, and the inline-six powers these new BMW models with authority. With a top speed of 155 mph, a limit that can be raised to an optional 180 mph, this will be a veritable autobahn stormer. Official data isn't here yet, but zero to 60 mph will probably be significantly less than 4 seconds. The steering is precise and predictable, and there is virtually no understeer. These cars love to be steered with the rear axle, and there are three modes that should satisfy every driver: Stability on, stability all off and a Sport setting that allows for some drifting and a beautifully agile driving experience, but ultimately kicks in to keep the car on the desired track even if the driver runs out of talent.

Here's an interesting tidbit: While BMW engineers tell us that the 4 Series is designed to be sportier than the 3 Series, and it is in fact stiffened, the M GmbH performance division has taken another approach: They want the driving experience in the M3 and the M4 to be as similar as possible. And so that you're reminded how similar they are, they will be wearing the same big nose.

Pricing has not been announced yet, but we expect the regular M3 and M4 to start around $70,000 as the current models are. The Competition model will command a few thousand dollars more. Deliveries are likely to begin in early 2021.