What late-1970s vehicle does it remind you of?

BMW enlisted the help of its Individual departments to create an appearance package named Golden Thunder for the 8 Series. It wraps the inside and the outside in black and adds a handful of gold accents.

Every 8 ordered with the Golden Thunder package is finished in either Sapphire Black metallic or Frozen Black metallic and fitted with the M Sport package. It also receives high-gloss black trim, there's not an ounce of chrome on it, and brake calipers painted in — you guessed it — black. BMW then adds gold accents on both bumpers, on the rocker panels, on the mirror caps, and on the coupe variant's rear spoiler. Double-spoke 20-inch light wheels add a finishing touch to the look. If you're experiencing déjà vu, it could be due to the fact that the Jeep CJ-7 Golden Eagle built between the 1977 and 1980 model years received a similar look, though stylists took it a giant step further by putting an image of an eagle with its wings spread open on the hood.

Interior designers swathed the cabin in Merino black leather upholstery and added aluminum mesh-effect gold trim on the center console. Edition-specific emblems stitched into the front headrests reminds the occupants they're riding in something a little bit more special than a regular-production 8 Series. BMW also added a gear selector made with CraftedClarity glass, and a surround-sound system made by Bowers & Wilkins.

There are no mechanical modifications. The Golden Thunder treatment doesn't extend to the engine bay.

BMW noted every variant of the 8 Series is eligible to receive the Golden Thunder package regardless of body style and cylinder count. Autoblog learned from a company spokesperson that production will be limited to 250 units worldwide, and that none will be sold in the United States. 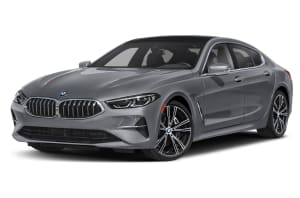