Unreleased NASCAR NES game from 1990 surfaces for the first time

Chris Oberth's 'Days of Thunder' was canceled for unknown reasons

Like cars, video games go through a lengthy development process that involves countless hours of testing and prototyping. Some emerge from it and become smash hits that permeate popular culture, while others stall for various reasons and are never launched. Historians recently discovered, reconstructed, and released a 30-year-old racing title named "Days of Thunder" developed for the Nintendo Entertainment System (NES).

Chris Oberth, a programmer and designer who died in 2012, created "Days of Thunder" for Mindscape in 1990. He drew inspiration from the eponymous movie released that same year, but his game was never launched because Mindscape canceled it for unknown reasons. Members of the Video Game History Foundation (VGHF) explained they unexpectedly uncovered it while sleuthing through boxes of floppy disks, CD-Rs, old computers, cassettes and other miscellaneous items on which software can be stored that Oberth's family loaned them in early 2020.

Dusting off an NES cartridge and popping it into the console to fire up "Days of Thunder" for the first time would have been far too easy. It was canceled before it entered production, so putting it together required gathering split and encrypted data from nearly 40 floppy disks, digitizing it, making sense of it all, weeding out the files that weren't needed, and -- with fingers crossed -- stitching the rest together. Engineer Rich Whitehouse told Polygon this meticulous process took more than two weeks. 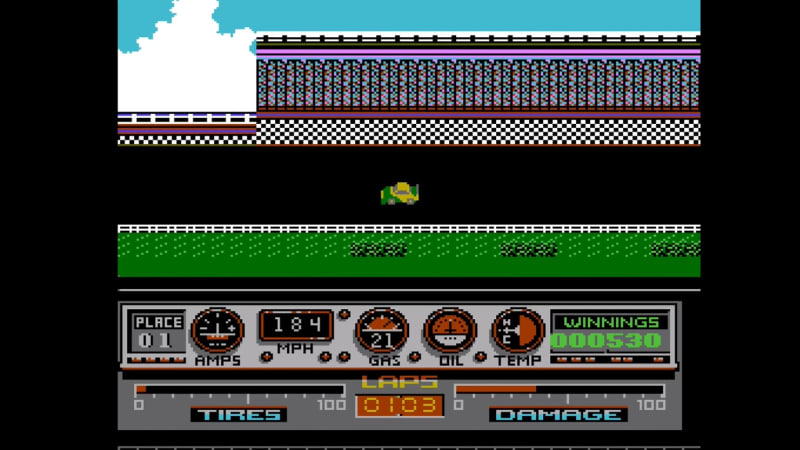 Video footage uploaded to YouTube confirms the game is pure, undiluted 1990 goodness. After entering a name, players are shown the season's schedule (which lists tracks like Daytona and Talladega) and asked to choose a car. Three models are available in the demo: The first has a 350-cubic-inch engine and a chassis described as "loose," the second is powered by a 327 and sits on a "tight" chassis, while the third blends the former's chassis and the latter's engine. The point of the game is, of course, to win, which requires factoring in pit stops. The dashboard displays key information about the car like tire wear, damage and the fuel level.

Mindscape is no longer around to explain why "Days of Thunder" wasn't released. Oddly, it launched a different racing game with the same name in 1990, but Oberth wasn't involved in its development. Although this is pure speculation, one team could have picked up where another left off. Regardless, Polygon reported video game enthusiasts plan to make and sell a small number of "Days of Thunder" NES cartridges and donate the proceeds to Oberth's widow. Pricing hasn't been set yet. Alternatively, Whitehouse uploaded the game's source code, a custom build tool, and pre-built binaries on GitHub, so computer-savvy gamers can recreate it on their own.